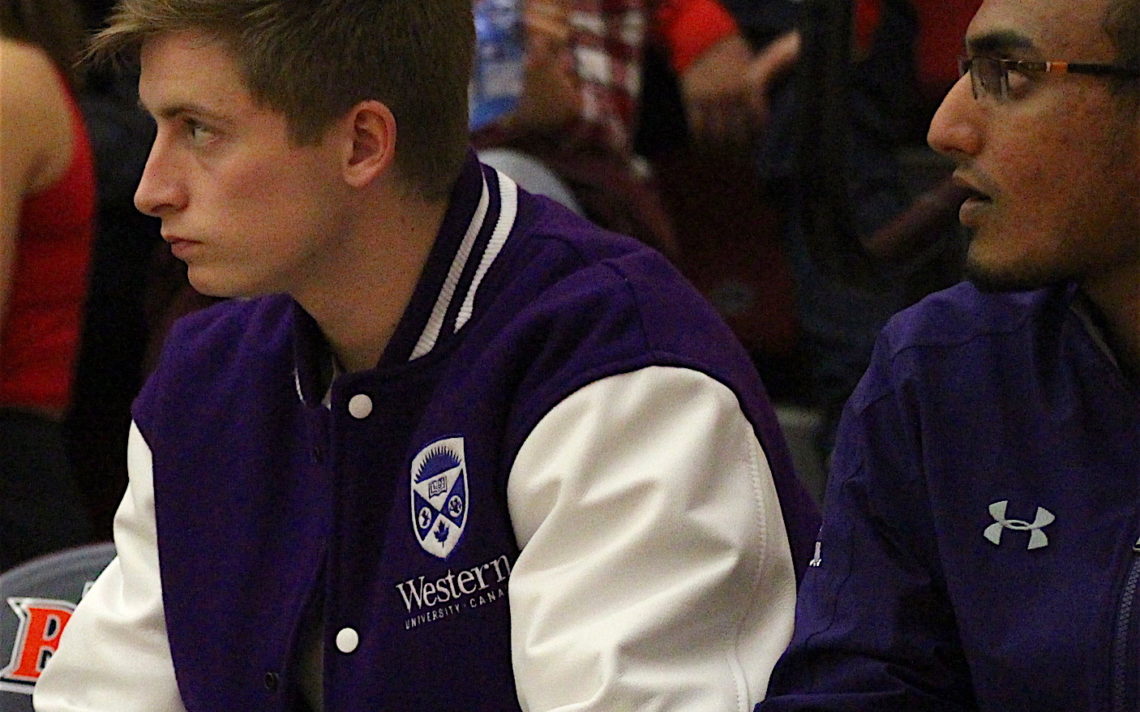 Mustang hopes injury woes behind him

A familiar face returned to Niagara last Wednesday when the Western Mustangs men’s basketball team arrived at Brock University to take on the Badgers in the Ontario University Athletics season opener.

Sitting on the visitors bench wearing beige pants and a purple and white Western jacket was Niagara Falls native Tyler Thomson, the two-time winner of the George Hillesheim Award as the top boys high school basketball player in Niagara Falls.

The bench was the worst possible location for the 5-foot-10 guard as he continues to experience first-hand the old adage of ‘If it wasn’t for bad luck, he wouldn’t have any luck at all.

His series of unfortunate events began in Western’s first league game last season when he suffered a high ankle sprain in the third quarter of a game versus Guelph.

“I took about four months off with that injury and I pretty much missed the whole season,” the A.N. Myer graduate said. “It was brutal and frustrating but what are you going to do?”

Thankfully for the 19-year-old, he appealed to the OUA for a medical redshirt and didn’t lose a year of eligibility. After a summer of hard work and rehabbing, Thomson was gearing up for his Rookie Season Part 2 when he broke his right hand three practices after training camp had ended.

“I got the cast off two days before Brock, so I am kind of in rehab now and getting it back into playing shape.”

His return doesn’t look that far away.

“He’s back to being green-lit and able to play now and he just getting back into the swing of things,” Western head coach Brad Campbell said. “Hopefully he can make a quick recovery and help us on the court.”

Thomson will readily admit to going through a little of ‘Why me?’ when he first injured the hand.

“It’s crazy that this year and last year I suffered two pretty catastrophic injuries, but hopefully they will never occur again,” the 5-foot-10 guard said. “Hopefully, things will be going up from here instead of taking another downward spiral.”

Because last year’s injury was to an ankle, he was still able to go to the gym and work out.

“I was able to get through last year by focusing on this year,” he said.

Thomson would have killed for a chance to play in front of a Niagara crowd last week.

“It certainly would have been nice to go out and play in front of the hometown but the guys did a great job either way,” he said. “We play them once more this year so hopefully we can change the outcome the second game.”

There’s no set date for Thomson’s return to the lineup, but he’s hoping to be back playing within the next two weeks,

“It would be great to play in our home opener this Friday but that might be a little too ambitious.”

Campbell can’t wait to have him back on the floor.

“First and foremost, he’s a competitor and a warrior out there,” he said. “He plays extremely hard and at very good pace. He gives us some ballhanding, he’s able to push the ball and he can score and create offence.”

On defence, he’s a definite pest.

“He will get after some people and he’s not afraid, at his size, to play physical,” Campbell said.

Thomson isn’t sure what his role will be when he’s back playing.

“We have so many good guys and so much talent on the team this year, that I think that’s a question I can’t answer until I get back in the flow of things,” he said. “We will see where the coach puts me.”

Thomson hasn’t set any personal goals for the season.

“Our team is really young and we have a lot of potential, and I want to be one of the guys who can contribute to the cause for future years,” he said. “Even though we might not be as successful as we want to be this year, I think this is more of a building year.

“We have the potential to be a really good team in the OUA.”

Away from the court, Thomson is studying business management with an emphasis on consumer behaviour. He feels he has adjusted well to being a student/athlete.

“Last year’s first semester was a little rough but I have figured it out now,” he said. “Things are going a little smoother.”

Hopefully his basketball career will follow that same trajectory.