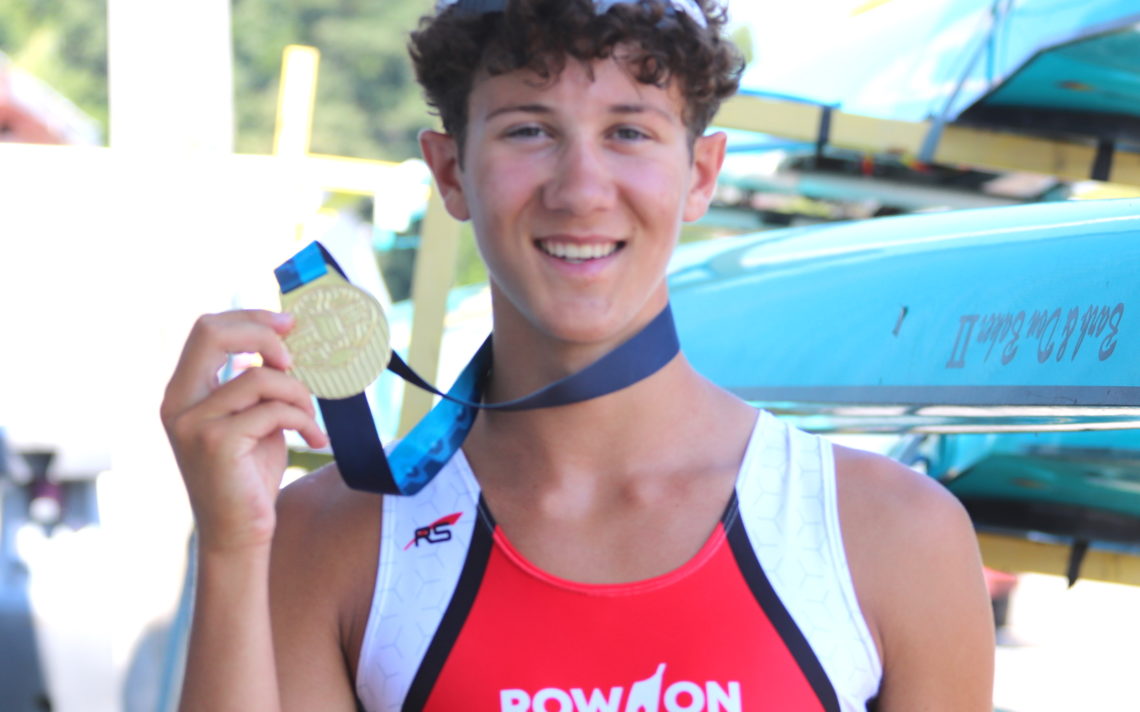 For the second time in the last two and half months, Lucas Maroney had a gold medal placed around his neck at the Henley Grandstand.

In early June, he won the junior single at the Canadian Secondary Schools Rowing Association championships and on Saturday he was a part of a Team Ontario men’s quad that crossed the finish line first at the Niagara 2022 Canada Summer Games. Other members of the boat were Stephen Harris, Owen Bartel and Alessio Perco.

“It feels really good, especially since it is more of a crew boat and I have more people here to share my emotions with,” the 16-year-old Welland resident said. “It was a lot of fun being with the guys. We only started rowing together on Wednesday and we put a lot of work in. We were on the grind and it has paid off.”

He was thrilled when the gold medal was placed around his neck.

“It was a great experience considering rowing won’t be around at the next Games. I was happy to get this year in and share in with all my friends.”

It has been quite the eventful summer for Maroney. After the CSSRA championships, the Grade 11 student at Notre Dame tried out for the under-19 national team and was named to the squad for the worlds in Varese, Italy.

He teamed with Bartel in the double at the worlds. The duo won their heat and quarter-final race and placed 11th overall out of 27 countries.

“The experience out in Italy was amazing and I would also consider this (Canada Games) a high point as well,” Maroney said. “It has been a rollercoaster of a summer.”

The youngest male on the Canada Games and under-19 roster has developed a lot this summer.

“I have learned so much about my rowing career and how to approach the future and my future races,” he said. “Having the experience to be out there and breaking the ice in my international career was the best part.”

He is enjoying himself at the Canada Games.

“I like that we got to stay close to home and it’s not too far from my hometown of Welland,” he said. “It has been great and staying at Brock (Athletes’ Village) has been amazing. There are lots of fun games that we get to play and being with the team has been an awesome experience.

“The junior worlds were the starting point for me but I wouldn’t count this as anything less than an amazing event. It is an honour to represent Ontario.”

Bartel and Maroney will also compete in the heavyweight double final on Sunday. Finals start at 9 a.m. Sunday.

When the Games are done, Mahoney is hoping to get a chance to chill at his grandparents’ Lake of Bays cottage in Muskoka.

“I am going to take a little bit of a break from rowing and de-stress.”