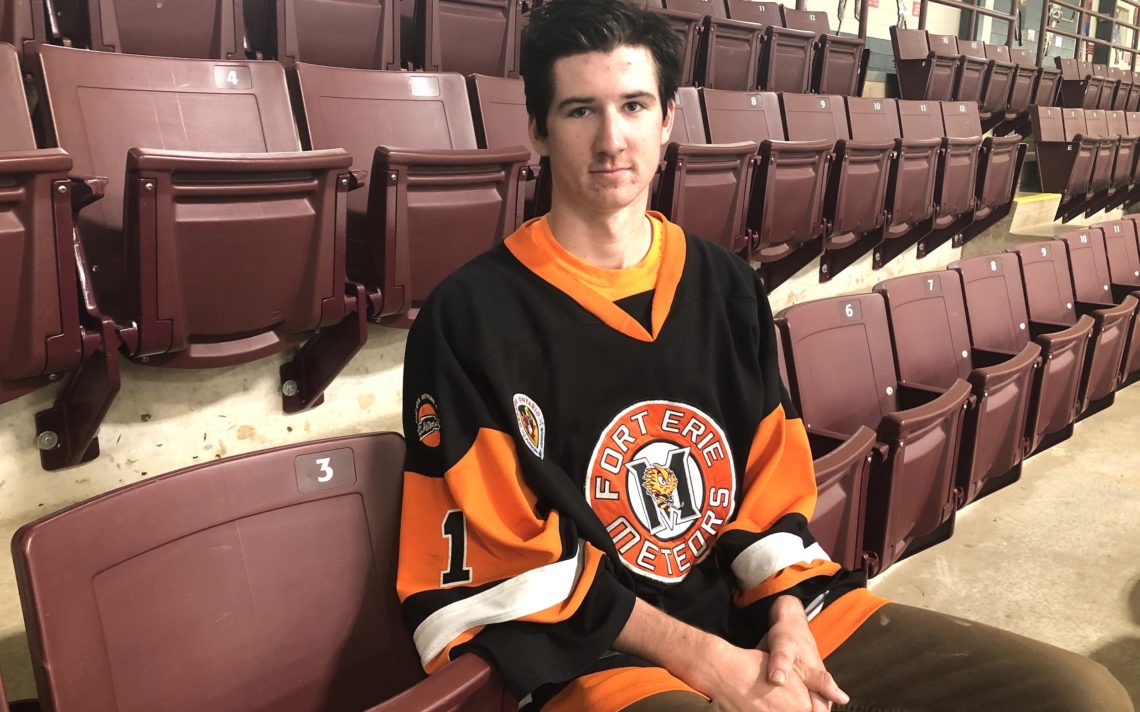 Dalton McBride returns to the Fort Erie Meteors this season with a chip on his shoulder.

The 18-year-old Grimsby native is determined to show the Brooks Bandits of the Alberta Junior Hockey League they made a huge mistake when they cut him recently.

McBride showed well in Alberta but was left off the roster when the Bandits decided to keep two, more experienced local netminders.

“I believe I should have been on the team,” McBride said. “They said it wasn’t my performance. It was the business side of it.”

Despite being released, McBride said the time in Alberta gave him confidence he can perform at the next level.

“It was the best experience I ever had in hockey,” he said. “It was really good. The coaches were great, the atmosphere was really awesome, the intensity was there.”

Fort Erie coach/general manager Nik Passero welcomed McBride back with open arms, and even told him to take some time to regroup after the disappointment of not making the team.

“It’s huge to have him back and the way he came back was awesome,” Passero said. “He came back ready to work. I even told him if you need a week or two of feeling bad for yourself, but there was no time (needed). The next time he was on the ice, he was back to being a leader.”

McBride was able to quickly turn the page and is looking forward to his second season with the Mets.

“I’m not a sulker. You take it with a grain of salt and work harder and improve and maybe go back next year and show them they should have taken me,” he said. “I wish the season started earlier because I’m ready to go.”

McBride, who was selected in the fifth round of the 2018 Ontario Hockey League draft by the Kitchener Rangers, shared the goaltending duties with Jacob Hearne last season and is determined to take is game to the next level this year. Hearne has moved on to the Toronto Jr. Canadians of the Ontario Junior Hockey League this season.

“My confidence is really high, especially after last year,” McBride said. “I thought I played really well last year and hopefully will play even better this year. I want to play as many games (as I can), stop as many shots and just improve every day.”

McBride will share the net this season with 20-year-old Malachi Albrecht, who played last season in the United States Prep Hockey League.

“It’s going to be a great tandem to have,” Passero said. “The last three years, we had Jacob Hearne here and he was one of the better goalies in the league and we didn’t want to take a step back. Dalton being able to play 25 games last year and nearly 50 the year before with Dunnville, he’s almost got 75 games of junior hockey under his belt at 18 years old. He’s in that area where he could be a top goalie and he still has so much to learn. His ceiling is so high.”

McBride, who is working in the construction industry, has high hopes for the Meteors this season.

“I think all the returning guys are really hopeful and excited to get started because of what we did last year,” he said.

The Meteors recently rounded out their roster with the addition of Josh DiFrancesco, Dante Masse and Thomas Gualtieri from the Welland Junior Canadians who are taking a leave of absence this season.

The Meteors recently played the Pelham Panthers in a scrimmage and Passero said the time was well spent despite no contact being allowed due to the COVID-10 pandemic. The Meteors prevailed 5-2.

“I think it was huge for the guys to do something and see some light at the end of the tunnel,” he said. “I thought it was great. I think the no contact thing is blown out of proportion. The guys just want to play.”

The Meteors will visit the Panthers again this Sunday. Scrimmages are not open to the public.