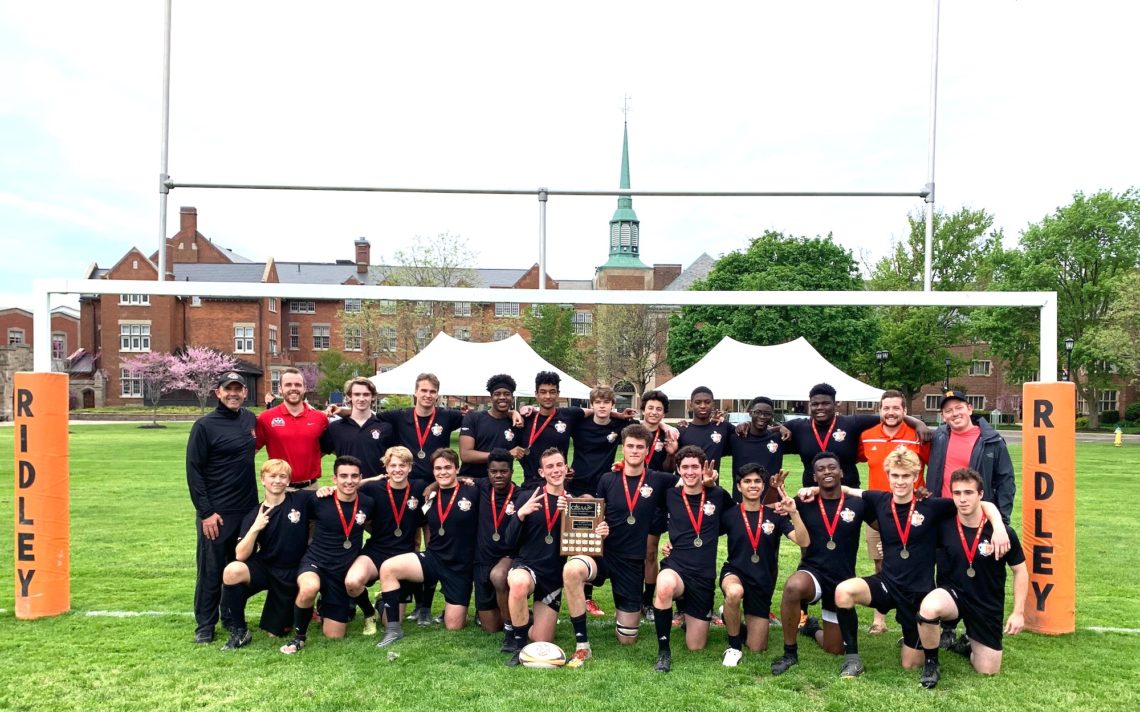 The Ridley First 7s displayed a flair for the dramatic.

The Tigers captured the CISSA (Canadian Independent Schools Athletic Association)  boys rugby championship at home in the most improbable and dramatic fashion possible.

Trailing 10-7 and deep in their own end with time running out, the Tigers somehow managed to advance the length of the field and score the winning try to defeat St. Michael’s College of Toronto to win the title and cap off an undefeated CISSA season.

“It was very dramatic. It was a great way to win,” 7s coach and Ridley headmaster J. Edward Kidd said. “It’s very, very memorable. It will rank right up there with some of the best team experiences.”

Kidd said the Tigers simply refused to quit against a strong St. Mike’s team, whose only loss came at the hands of Ridley earlier this season.

“It was back and forth. It was just a slugfest,” Kidd added. “On the final play of the game, we were pinned deep. In football, it would be like a Hail Mary (pass). We kicked it about 50 metres. It was kick and chase. It was a foot race. We kicked it again and it went right into our guy’s hands and he went in for the try. It was the last play of the game.”

The Tigers also faced Country Day School from King City and Crestwood Prep from Toronto en route to the finals.

“We played well and beat them pretty handily,” Kidd said. “We made some mistakes but played well. Our goal was to keep getting better every game at the tournament.”

Kidd admitted he wasn’t sure how his charges would handle being behind in the game after having dominated most of their opponents this season.

“We were on our heels for most of the game. We’re used to controlling the game and having the ball in our hands most of the game. On this game, it was the exact opposite,” he said. “They had all the athleticism and skill, but there were a few games that we real battles, including the last game.

“Sometimes when you win and it becomes easy, you never face adversity. And then suddenly you face adversity in the championship game and you don’t know how to handle it.”

The championship capped off a memorable season for the 7s who also captured the CAIS (Canadian Accredited Independent Schools) national tournament in April.

“I’m obviously very proud,” Kidd said. “I’ve been coaching some of them since they were in Grade 7 and the majority of them at least three years in Upper School.

“We have taught them how to play rugby, specifically 7s rugby, which is distinctive and they’ve really put it all together.”

Female crews from Ridley also participated at the WOSSA Regatta.

“The junior girls quad came away with two silver medals racing in both the junior and senior categories. They finished their first race aware of some areas for improvement which they executed in the final for the senior race,” coach Lee Ann Schwandt said. “The senior girls eight qualified for the final with a solid race in the heat but experienced a few set backs in their final event as they raced down the course trying to beat the thunder and lightning that was rolling in to the regatta site.

“While the junior crews and senior four did not make the finals this time, they know they can perform at a higher level with a few adjustments at their next event.”

“Congratulations to the Ridley College Badminton U20s on a terrific conclusion to their CISAA season,” coach Nick Ronald said. “The team competed in the Senior CISAA Badminton Championships where they earned a solid finish on the strength of 19 match victories across each of the eleven different flights that comprised this double elimination event.”

The First Girls rugby team headed to Country Day School in King City for the 7s first Division 7s Championships. Each top-four team would play every other team, with the league champions to be determined by the team that scored the most points.

In the first match of the day, Ridley squared off against HSC, a team that they had traded wins and losses with all season long. Despite Ridley controlling 80 per cent of the game, the girls were unable to finish off strong offensive pushes, often going into contact with the ball as opposed to making a final pass to an open player to set them up for a score. Hillfield capitalized on small mistakes to send a speedy winger down the sidelines, for which the Tigers had no answer. Hillfield scored three times in the match, with a single conversion, to win 17-0.

In the second game, Ridley faced Trinity College, another team with an even win-loss record for the season.

TCS struck first with a penalty try. Ridley fought right back, and on a lovely string of passes and teamwork, Mikayla Itemuagbor took a pass from Emma Penner, who circled around the outside, and as Mikayla drew the last defender she made a final pass back to Penner, who raced down the sideline for a Ridley score. Ridley trailed 7-5 at half. In the second half, again, despite controlling the vast majority of the ball, the Ridley offence was stifled by tough defence and the Bears made a final speedy break scoring an agonizing try to seal the game 12-5.

In the final game of the day, Ridley matched up against Appleby College, yet another team with a near even win-loss record against Ridley for the season.

Appleby came out swinging, and built a 17-0 lead by the half.

In the second half, the Tigers started battling back from the deficit, and Katherine Culligan cut through the Appleby defensive line and had 60 open metres between herself and the goal-line. A quick and fast Appleby defender tracked her down, however, and Katherine turned backwards and fended the Appleby player off for the last 20 metres before crashing over the line for the score.

In the next minute of play, Mikayla Itemuagbor took a perfectly time off-load pass from Culligan, and carried the ball in unchallenged for a score under the posts. Brooke Loranger successfully converted, but time had run out on the Tigers, who dropped a 17-12 decision.

The Ridley girls finish the season having made a successful transition to the 7s game, although their 15’s rugby matchups all unfortunately fell by the wayside.