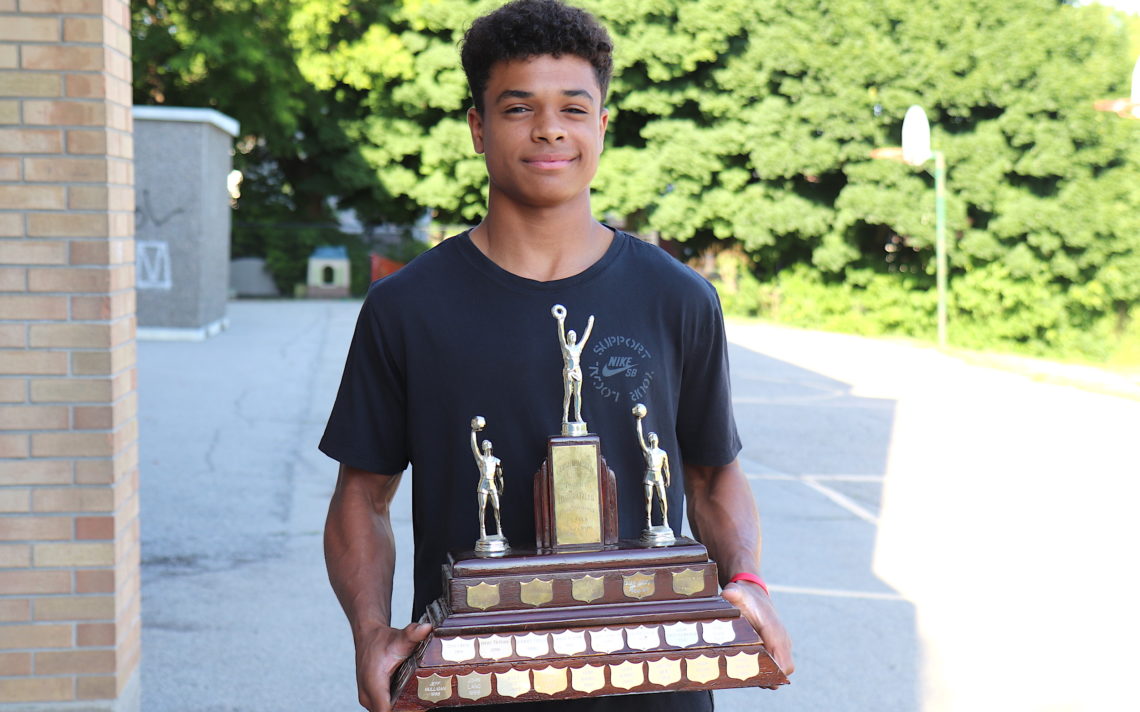 The 2021-22 winner of the George Hillesheim Award as the top boys high school basketball player in Niagara Falls credits his older brother, Santiago, for his basketball prowess.

“It has always been me and my brother (Santiago). He used to play basketball when I was really, really young. I was a soccer player and he was playing basketball so I copied him,” Mani Maynard said. “We started playing together and he started training me from a young, young age. He plays college ball and I always had that advantage over other people because he is playing at the next level.”

“He has always been my role model and I have always looked up to him for everything, not just basketball,” the Grade 11 student at A.N. Myer said. “When it came to basketball, anything he said I did he is the person I will always look up to in everything.”

Myer senior boys coach Tyler Thomson, a two-time Hillesheim winner, wrote that Maynard established himself as one of the top players in Niagara Falls this past season.

“His ability to score off the dribble and beyond the three-point line made him a difficult task for any defence,” Thomson wrote. “During the last two years of lockdowns, Mani spent countless hours in the gym working on his game. This year, you really started to see the (results of) the extra work pay off. On the court, Mani is a great teammate and has a great work ethic. He competes at a high level whether it is a morning practice or a zone championship.”

Thomson is anticipating even bigger things from Maynard this coming season.

“Expect Mani to play a key role for the Marauders during their senior season next year as the Marauders will look to secure their first OFSAA (Ontario Federation of School Athletic Associations) berth in over a decade.”

This past season, Maynard feels the biggest strides he took on the basketball court were improving his three-point shot and his confidence.

“In Grade 9, I could kind of shoot it but I didn’t have as much confidence. Then Grade 10 was COVID so I just trained the whole year with my teammate Adam (Abboud). I shot the ball every day, shot lots of threes and I built that confidence to shoot them in games.”

Most of the shots he hoisted with Abboud were outside at Theresa Park, near Abboud’s home.

Maynard and Abboud were motivated by past disappointment.

Maynard is working hard to take that next step as a player.

“I have to work on my strength, more finishing and probably taking it to the rim as opposed to shooting because I shot a lot of threes this year,” he said. “People won’t be expecting me to get to the rim as much.”

He also has high hopes for his team.

“We want to make it to OFSAA, for sure.”

Maynard was thrilled to win the George Hillesheim Award, an award that has Olympians and NCAA Division 1 players listed on it.

“It is a cool feeling. My coach reached out to me and told me that I had won the player of the year. It made me feel great because I didn’t even know it was a thing.”