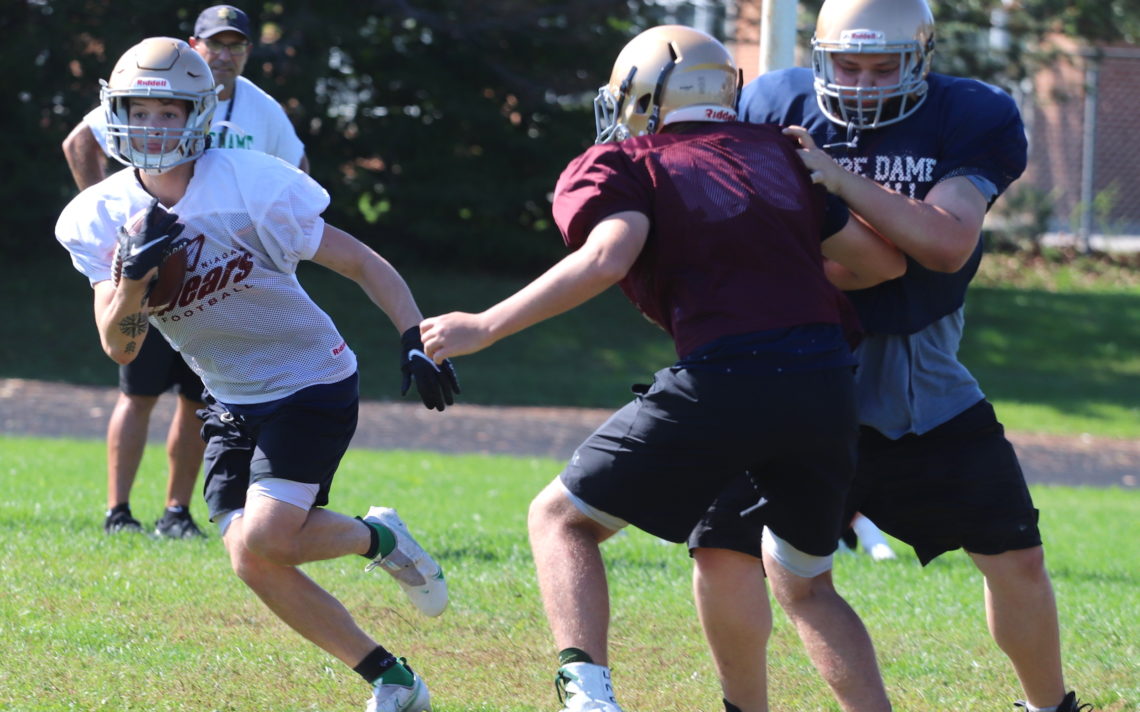 Irish ready to take on all challengers

“You can try but we ain’t going down easy,” the 6-foot-1, 250-pound defensive tackle/nose tackle said.

The 12B student says there is no secret to Notre Dame’s football prowess.

“We have good heart and that always keeps us going. We are good as a unit and that is how we always win.”

Notre Dame head coach Tim Bisci, never one to give a team bulletin board fodder with any braggadocio, was more cautious about his team’s prospects.

“I think we will be strong. We will be competitive but it depends on what everybody else has. Myer is always going to be tough and Sir Winston played well last year so that should be a decent battle if things play out like they did. And Saint Paul is always a quality team. Rick (head coach Oreskovich) always has his guys ready. And we didn’t even see BT last year because of the rain and everything else.”

Bisci is anything but overconfident.

“If you ask my wife, she would tell you that I say that we are the worst team in the league every week. I think we will be competitive and I don’t think I will say much more than that,” he said. “We will be in every game.”

That being said, there is room for optimism for Bisci.

“People might say otherwise but I think we can be really good if we put the effort in. We could take this to a top level.”

The Irish roster was bolstered by a number of graduates from the school’s Niagara Bowl junior championship squad.

“We don’t have an overly abundant amount but we have some,” he said. “There’s three or four of them that will be starting right away. That just shows how good our junior program has been the last couple of years.”

One area that Notre Dame is blessed is in the number of 12B players back for another run at a championship. He has about a dozen 12Bs returning.

“It’s probably one of the biggest numbers I have ever had.”

The key to any successful football team is depth and Bisci said his team is trying to get it. That showed last week in exhibition play.

“The game was a hot day and we had 35 kids dressed and all 35 played good minutes in the game. It was interesting to see who could play where. We are trying to find it and I think eventually we will have some depth.”

Notre Dame has 39 players on its roster right now and Bisci expects that to climb to 41. Last year, the Irish boasted a 38-man roster.”

The Irish played Burlington Nelson in an exhibition game last Friday at the University of Guelph and won 35-13.

“When it came down to it, I think we had a bit more athletes that they did,” Bisci said. “All the first-game catastrophes that you can come up with happened and it was amplified because we were playing so early. Usually we don’t play our first game until next week, about the 23rd.”

Notre Dame is hoping to gets one game in on its home field in before construction begins on an artificial turf field at the school. After that it will likely move to Kiwanis Field but Bisci doesn’t see that as a major disadvantage.

“To be honest, I think we have maybe played three homes games in the last three seasons. We have been road warriors because of the condition of our field. Last year was atrocious and 2019 we didn’t want to take a chance because we played in 2018 and I think it hurt us.”

Snider is a key part of the squad.

“He’s a tough kid. He gets banged up and he just keep coming,” Bisci said. “He played real hard for us last year, especially down the stretch. When we got into games against Myer, Westmount and again in the bowl game against North Park, they had some big kids up front and he was taking on double teams. When you can’t run inside on us, that makes a big difference.”

Snider has been playing summer and fall football since he was seven years old.

“I have played 12 years of football and I just love it. It is fun.”

He was interested in playing football at the post secondary level but has had a change heart in that regard.

“I’ve gotten a few injuries along the way after playing for so long and I really discovered a liking for framing and carpentry. I am going to go pursue it.”

His injuries have included a pair of shoulder issues and a knee injury.

The fact that it is his last year of football has given Snider added incentive.

“I want to win one last time.”

Once while playing house league football when he was very young, he broke a toe during the game and continued to play.

“I love the drives, the whistles, the noises, everything. It is awesome,” Snider said.