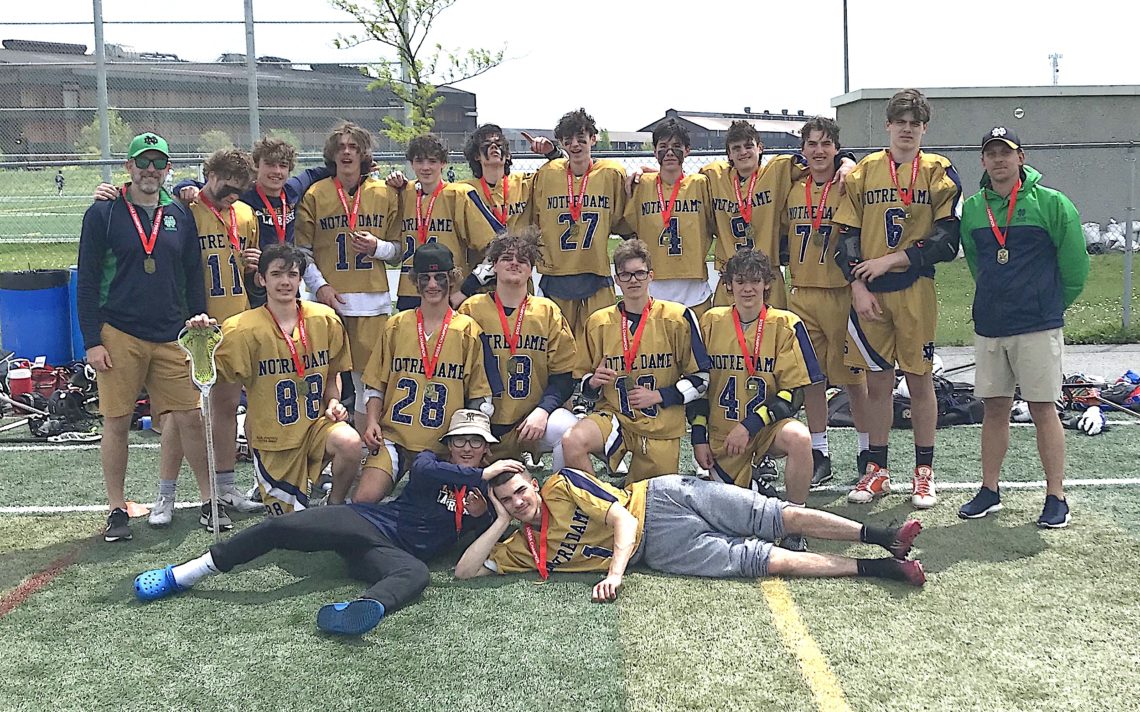 After watching his Notre Dame Irish surrender a late two-goal lead to the A.N. Myer Marauders, the Grade 10 student scored in overtime to give his team a 9-8 victory in the Southern Ontario Secondary Schools Association AAA championship game.

“That is my biggest goal. It was really exciting,” said the 15-year-old, who scored five goals in a semifinal victory over Churchill.

He had one thought in mind as he went in on a breakaway.

“I wanted to get there before their D (defence) did.”

He was thrilled to score the winner.

The member of the St. Catharines Athletics No 1 field lacrosse team has enjoyed playing for his high school team.

“I have been making friends with everyone and it is nice to play with them.”

He describes his team as a special group.

“We all work together as a team and I don’t think we would have made it to OFSAA (Ontario Federation of School Athletic Associations festival) if we didn’t work as a team.”

Notre Dame head coach Mark Iannizzi is glad to have Calder on his squad.

“Josh is our utility player. He mostly plays attack but he also plays midfielder,” he said. “He is fast, extremely accurate and I had a good feeling when he got that ball off of two good plays.”

Iannizzi described the SOSSA final as a rollercoaster.

“We came out strong, played well offensively and we kept them off of offence. We built a little bit of a lead but the downside of the rollercoaster is we let them get back into the game,” he said. “That is not to take anything away from them because they played a great game but I felt we lost our edge late in the game.”

Notre Dame will be making its first appearance at the OFSAA Festival in about four or five years.

“It is a difficult task to get there and it doesn’t matter if it is back-to-back years,” Iannizzi said. “It is a lot of games in a short amount of time and the kids are happy. We are privileged to be going again and representing out school.”

A.N. Myer came so close to advancing to OFSAA. Dylan Devries scored his fifth goal of the game on the powerplay with six seconds left to force overtime and then the Marauders almost won it early in overtime.

“I am pretty proud of this group,” Myer staff advisor Dave Lupish said. “They put a lot of hard work in and they gutted it out right to the end.”

He was proud of how his team rallied from a 5-2 halftime deficit.

“It is a heartbreaker to lose in overtime but it is what it is. The guys battled hard.”

“The last two games of the regular season we didn’t show up to play and we probably could have had a better record going into the playoffs but we played a solid game against GFESS to win the zone championship. I was pleasantly surprised that we were actually here in a SOSSA final.”

Lupish was asked at the last minute to serve as staff advisor for the team.

“At our school, we don’t have proper nets or a field that is lacrosse-ready so it’s a ragtag thing,” Lupish said. “But because of the COVID shutdown for a couple years, we have had a couple of senior students who have obviously had a lousy last couple of years. They begged me to take on the role and I couldn’t say no.”

The team was coached by Myer grads Joe Fragnito and Trent Hunter.

Notre Dame advanced to the SOSSA final with a 12-6 semifinal victory over the Zone 4 champion Sir Winston Churchill Bulldogs.

Up next: Notre Dame advances to the OFSAA boys AAA field lacrosse festival May 30-31 in Mississauga.