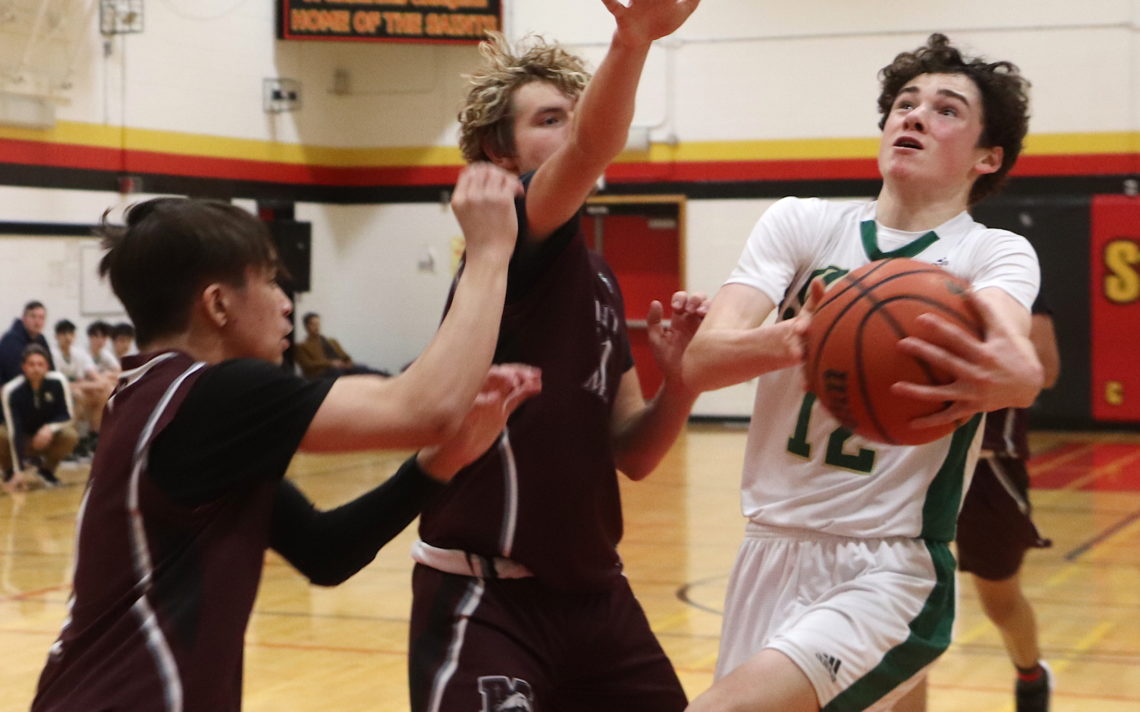 On Friday night, it was Adam Ponting who came to the rescue when the Notre Dame Fighting Irish fell behind 6-0 early to the Saint Michael Mustangs in the junior championship game of the BPSN Best of Niagara Boys Basketball Tournament at St. Catharines Collegiate.

The 13-year-old scored six straight points to tie the game and then he kept right on going, finishing with 24 to help the Irish record a hard-fought 63-58 victory in front of a packed gym.

“Much like Andrew (Benko), Adam is the linchpin. You can see when you watch the game that he is the centrepiece and the focal point of our offence to get things done,” Notre Dame head coach Wade Pychel said. “We make sure to get the ball inside and let him do his work down there.”

His offence was badly needed Friday when the Irish got off to a sluggish start.

“We needed to relax and he is a great, calming influence,” Pychel said. “When we called that early timeout, it was to make sure we got Adam the ball and he calmed us down with his presence inside.”

The Niagara United travel player was ready to do what was required.

“My role is to score, pass and pretty much do whatever,” the Grade 9 player said.

The six footer described the win as a team effort.

“Everyone played great and did their job and that is why we won.”

Ponting was happy with the victory.

“It is the biggest tournament. We were playing all the Catholic schools and this was a chance to win a Niagara championship.”

Ponting prepares for the hardcourt battles by battling it out with his older brother Lucas, a top player on the Notre Dame senior squad.

“We play one on one all the time and when we are shooting I rebound for him and he rebounds for me.”

“OFSAA (Ontario Federation of School Athletic Associations) was cancelled for the seniors and SOSSA (Southern Ontario Secondary Schools Association) was cancelled for us so this is sort of our Niagara region championship or pseudo-SOSSA,” he said. “I put a lot of stock in this tournament telling the boys that this is as good as it was going to get for us this year so we might as well put all we can into it.”

The packed Collegiate made it feel special.

“I am so happy for the boys,” Pychel said. “They played their hearts out tonight. They fought from start to finish to earn that win.”

Notre Dame built quarter leads 9-8, 25-17 and 39-34 before the Mustangs made it close in the final quarter. Saint Michael cut the lead to 46-45 before the Irish went on an 8-0 run to built a lead they would never relinquish.

Two of the games were close, one wasn’t and the Irish won all three encounters.

“It has become our main rivalry this year,” Pychel said. “It is our third time playing them and every game has been different. It has been back and forth and kudos to Saint Mike’s tonight. They played an absolutely tremendous game and we love playing them. I am looking forward to seeing them again next year to renew the rivalry.”

“They didn’t give up. We got a little bit down and the shots wouldn’t fall but we kept on trying and hustling and that’s all you can ask of these kids.”

Just making the team was challenge for the Saint Michael players. Eighty players tried out for the squad.

“I had to whittle it down about four times making cuts,” he said. “There were a lot of broken hearts but we only have 15 jerseys and that is all we can do.”

Bobyk was thankful for the organizers (Frank Keltos and Chris McLean) for organizing the event.

“This is a nice culmination of the season for all the kids and they did a great job organizing. Thank you very much.”