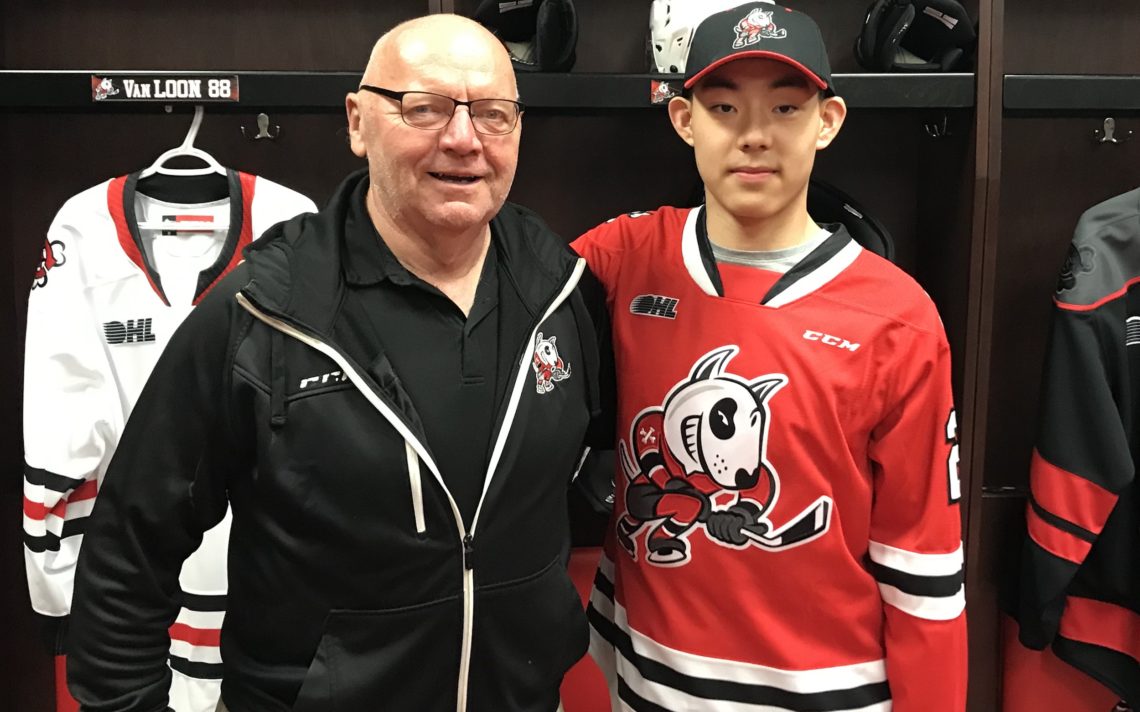 There was lot of uncertainty for the Niagara IceDogs’ scouts and coaching staff heading into the 2022 OHL draft.

“There was a big debate amongst all of us about where to go with the fourth pick,” said Roger MacLeod, Niagara’s director of scouting. “Normally you would know where you are picking long before but there was a lottery and we didn’t know until the end of the season.

“Then it became, ‘Here’s our top three guys and we thought if we can’t get one of these guys — and they were all gone — then we were going to go with the best defenceman and that was Sam Dickinson.”

Niagara would make Dickinson the fourth overall pick in the draft. The 15-year-old Toronto native played for the Toronto Marlboros under-16 AAA team this past season where he had four goals and 39 points in 46 games.

“He’s big, fast, smart and he’s a tough defender,” MacLeod said of the 6-foot-2, 190-pound left defenceman. “That is not something you notice when you see him because he is so good with the puck  he is so big. He’s a very good defender and we are hoping he becomes one of those kids who plays 25 minutes a game on the blueline He is probably going to be like Dougie Hamilton was for us.”

“He is going push right away. He is that good,” he said. “He can’t get any older so he just needs to get comfortable, get his confidence and get acclimatized to this level. Usually with the top kids, it will take a little while but he’s advanced and by Christmas time he will have 25 games under his belt and he will probably look like an 18-year-old.”

The OHL draft guide described Dickinson as an elite and complete defenceman who has the ability to control a game and has done it on numerous occasions this past season.

“He is a powerful skater that uses his mobility to defend and to create offence. He has very good puck skills and makes crisp outlet passes,” the guide read. “Defensively he may be one of the most reliable and toughest to play against in the GTHL. He takes time and space away well, will separate the man from the puck and has a very active stick. There aren’t many holes in Sam’s game.”

With the 25th overall pick and the second pick of the second round, Niagara chose Kevin He, a 5-foot-11, 166-pound winger with the North York Rangers under-16 AAA squad. In 16 games, He notched 13 goals and 25 points.

“He is a really, high-end elite skater who is fast and can really shoot the puck. He missed a few games early but he came back healthy,” MacLeod said. “The pace in the OHL is what catches up to a lot of younger players but not him. He is at that level.”

MacLeod expects big things from He.

“He should be able to score for us quickly and I think he is a better shooter than playmaker. If he gets on the right line and is able to gain some chemistry with one of our kids and someone can get him the puck in open ice, he can burn people,” MacLeod said. “He will be in there early.”

The OHL guide described He as an elite level skater who is always moving his feet and putting pressure on.

“He forechecks with a purpose and is hard to handle on the rush. He is a straight-line player that possesses a very dangerous skillset and shot that he uses from anywhere in the offensive zone,” the guide read.

Dickinson was expected to make the drive to St. Catharines Saturday but He didn’t waste any time get used to his new hockey home for the next several years. He came down with his parents Friday night to meet with IceDogs staff and tour the Meridian Centre.

“I was in the living room and all my family was there. My brother, my mom and dad were watching in on TV,” He said.

Before the selection was announced online, he got a call from IceDogs coach Sean Teakle informing him of the impending selection.

“He told me that they were going to draft me and I was really excited,” He said. “It is every kid’s dream to play in the NHL and getting drafted is an important part of the process. I had definitely dreamt about this moment and I was super excited.”

He was grateful to have his family with him for the momentous occasion.

“The first think I thought was I just looked back on my minor hockey career and I am really grateful for the people who helped me get to where I am today.”

Draft night will be one He will always remember.

“It’s going to be the whole experience from the moment when I got the call to when I made my way down here.”

He describes himself as a dynamic forward.

His draft year was derailed by a broken collarbone before the season started and He ended up missing his team’s first 12 games.

“Obviously it wasn’t the best possible scenario for it to happen but I got over it quickly and really focused on my rehab and getting back to playing with my team. That’s what was really important to me.”

He didn’t miss a beat, putting up huge offensive numbers when he returned to the lineup.

‘I really wasn’t focusing on stats too much. I really wanted my team to come together and bond with each other. I wanted to make an impact not even stats-wise but helping my teammates get close relationships with each other.”

He hasn’t set any goals for his first OHL campaign.

Taking part in the draft for Niagara were the entire six-person scouting staff and coaches Jody Hull and Sean Teakle and director of player and prospect development and evaluation Vince Tarantino.

The draft continues Saturday beginning with the fourth round and the IceDogs will be picking the best player available.

“At that point, it will be because it is really hard to predict,” MacLeod said. “There is going to be 60 players gone by tomorrow and you don’t know what will be left.”

MacLeod said there were no player concerns about being drafted to a team without a head coach or general manager in place.

“It wasn’t really an issue but everybody was curious and who can blame them. We don’t know who the coach is but right now it’s Jody.”