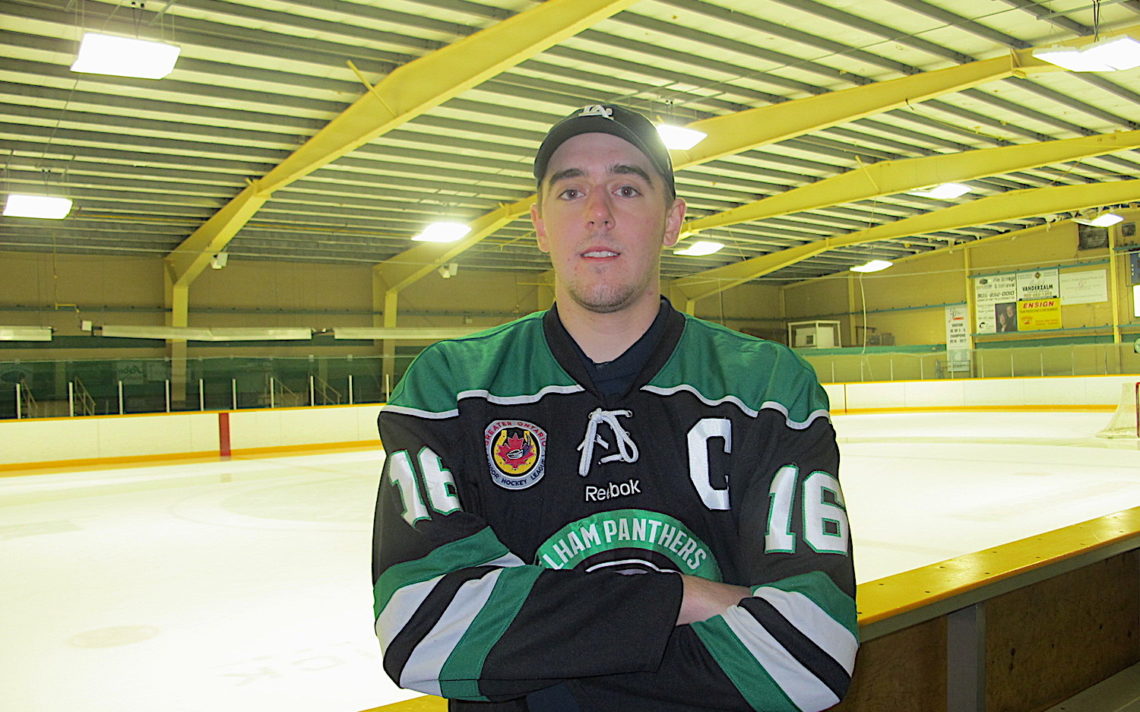 If anyone can appreciate the success of the Pelham Panthers this season it’s Thomas Young.

The 19-year-old forward has seen the franchise struggle on the ice in his previous three years with the team, including a tough 2015/16 campaign which saw them win just one game in 50 starts.

But this season Young has witnessed the Panthers transformed into a respectable franchise with an 8-12-1-1 mark, including a pair of wins over the St. Catharines Falcons.

“It’s definitely not easy,” Young said. “At the start of the season coming off just a couple of wins last year you come in and (wonder) are we going to lose again?

“It’s a lot to go from only winning one game to being in the middle of the pack and doing good. I think it all starts in the dressing room and knowing when we come to the rink there’s a chance to win every game now.”

“Mark’s done a great job. He’s a fantastic coach and has done an incredible job of getting us up every game,” Young said.

“These are the closest guys I’ve ever been with on a hockey team. They love the game. We’re really tight and we’re getting tighter and tighter every game and that makes a big difference.”

Barrick is effusive in his praise of Young.

“He brings a lot. He brings character, commitment and commitment to the town he lives in and plays for,” Barrick said. “He’s a character kid in the room and only goes 100 per cent all the time. There are no nights off for him.

“He’s a straight up hockey player who leads by example.”

Young is wearing the captain’s C this season and with good reason.

He’s a solid forward who has six goals and 11 points in 18 games and is also a strong leader in the dressing room who takes his role and the game very seriously.

Young said his understanding of the game began at a young age.

“I started playing AAA in novice so right from Day 1 hockey was pretty serious. Growing up with those group of guys and walking to the rink, it was serious from when it first started,” he said. “In novice we were learning breakout drills.”

He credits his leadership to older brother Tyler, who played junior B in Nova Scotia, as well as his father, Jason Young.

“By brother has been the captain of many teams. I look up to him and learned a lot from him,” he said. “He was a good role model for me. That had a big impact for the leadership.”

Young is the lone Pelham resident on the team and appreciates playing for his hometown club.

“It’s pretty exciting,” he smiled. “I live a 10-minute walk from here and come down to the home rink and at least half the crowd are familiar faces.

“That has a big impact in how you play. Being a hometown boy and going out there and all your friends come to the games and seeing them in the crowd, you always want to work way harder.”

Young can’t wait to play his final year of junior next season in Pelham’s new arena, which is under construction now.

“I can’t wait to see it,” he’s said. “I think the first game of the season next year is going to be a packed barn and a typical Pelham crowd. I think it will be something great for the team, but also something great for the town. “There are a lot of hockey people out here who have wanted this new arena for at least 10 years. I think it will bring out lots more fans and a better atmosphere and that makes for a great game.”

Young is taking a two-year program at Niagara College in renewable energy.

The Panthers are at Ancaster Saturday and home to Fort Erie Sunday.