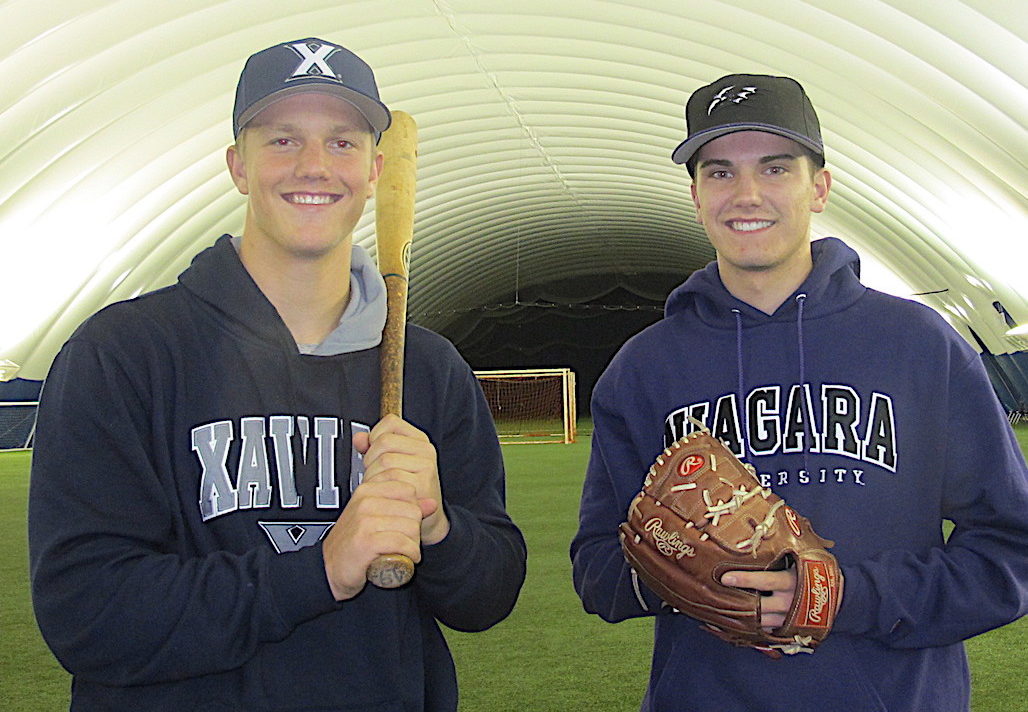 This is Day 1 of BPSN’s 12 Days of Christmas, a look back at some of our favourite stories from 2017. We hope you enjoy revisiting some of our top stories since our inception in September.

Niagara Falls will be well represented in NCAA Division I baseball action south of the border in the next several years.

Cal Theal will be on the mound at Niagara University beginning in the fall of 2018 while Owen Diodati will be behind the plate at Xavier University located in Cincinnati starting in 2019.

Both players received significant scholarship packages but politely declined to get into specifics other than to indicate they were good deals.

Theal, a 17-year-old, Grade 12 student at A.N. Myer, said the offer from Niagara checked all the boxes.

“I didn’t have other suitors and I was contemplating to see if there would be others, but this offer was really good,” Theal said. “It was close to home and good academics and a good, growing baseball program so I thought it was the right decision to make.”

Theal admitted the thought of perhaps heading a little further away than just across the border did cross his mind.

“At the beginning I wanted to go far away and isolate myself from everyone but being close there are definitely benefits,” he said. “All my friends and family can come and watch me play which is cool and there will still be road trips to go on so it won’t always be at home.”

Theal, who is going to take the academic explorations program, can’t wait to get going.

“I’m super-excited,” he said. “I’m not really nervous because I went on fall college trips (with the Great Lake Canadians) to play college teams and I did well against the teams which gave me the confidence to play Division I baseball.”

Still, Theal is well aware there will be a steep learning curve.

“They just want me to work hard and have the right mind set,” he said. “The competition is going to be strong but I enjoy a challenge. It definitely brings the best out of me.”

Theal, who has also caught in his career, will be performing exclusively on the mound at Niagara.

“Last season I became a pitcher only and at first I wasn’t too keen on it but it started to grow on me. I know pitching is my strong suit so it’s best to just focus on that.”

Theal, a tall right-hander, said he is hitting 86 miles-per-hour with his fastball while his slider has been clocked at 78 and his change-up at 80.

“Location and my two off-speed pitches are the most important to me. Lighting up the gun is something I like to do if I have two strikes, but I like to focus on location.”

He gave props to his father, Brian Theal, for coaching him all of his 12 seasons in Niagara Falls.

“It was definitely difficult because he was so hard on me all the time but he’s the one who pushed me to where I am now,” he said. “A lot of credit goes to him and my mother (Nancy).”

Diodati, a powerful left-handed hitting catcher, was so dominant as a 16-year-old he secured his scholarship a year in advance. He also played last season with Great Lakes, which is based out of London. He began his career in the GNBA.

Diodati said Xavier saw him play at a showcase tournament and quickly scoop him up.

“They liked what they saw and that’s where it started,” he said. “I went on my visit and really liked it.

“Obviously, it was a tough decision but I’m confident I made the right one.”

Diodati, a Grade 11 student at A.N. Myer, felt like everything fell into place on his visit.

“The campus was really beautiful and it’s not too far away from home where my parents and family can still watch,” he explained. “The academics were really good and they have a good baseball team.”

“Everything I heard from him, his goals were really similar to mine. I was really blown away by everything he told me. He’s an ex-catcher and that was really big for me to get that instruction.”

Diodati said about 30 schools had expressed an interest in his services.

“There were a lot of schools but I was really, really confident in making the decision I did. There is no doubt in my mind.”

The fact he was able to sign year early is a major relief for Diodati.

Diodati, the nephew of Niagara Falls mayor, figures his skill set on both sides of the ball played a big factor in the offer.

“I was recruited as a catcher but there aren’t too many catchers who are 6-foot-3 and 200 pounds and hit from the left side,” he said.

Having said that, he feels his bat may be ahead of his glove.

“I would say right now my bat is kind of the wow factor where defence is definitely something I think I do well — I have a strong arm — but one of my goals this off season is to get more athletic and become a better defender. As a big guy back there it’s harder to be mobile and getting low so I’m working on becoming more flexible.”

Diodati plans to study pre-med and minor in finance.

Greater Niagara Baseball Association director of player development Geoff Allen heard about both players four years back when he moved to Niagara from Hamilton.

“Both of them came to a catcher’s class I ran. I saw Owen and he was a prospect right away and then I saw Cal throw and I said he’s a prospect, too, but not as a catcher. I told him it was great he wanted to be a catcher but he was going to be on the other side of this.” 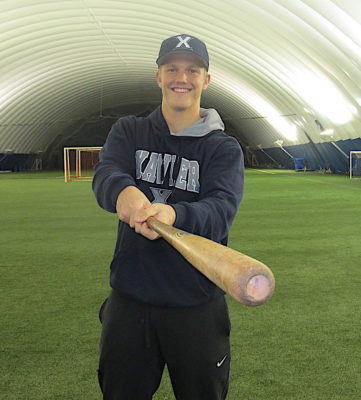 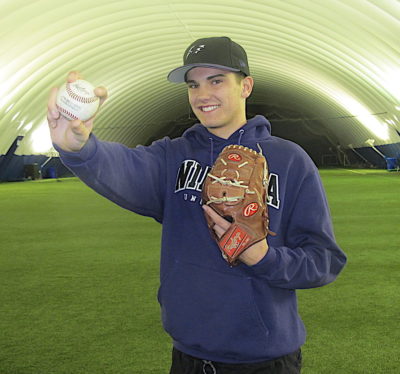