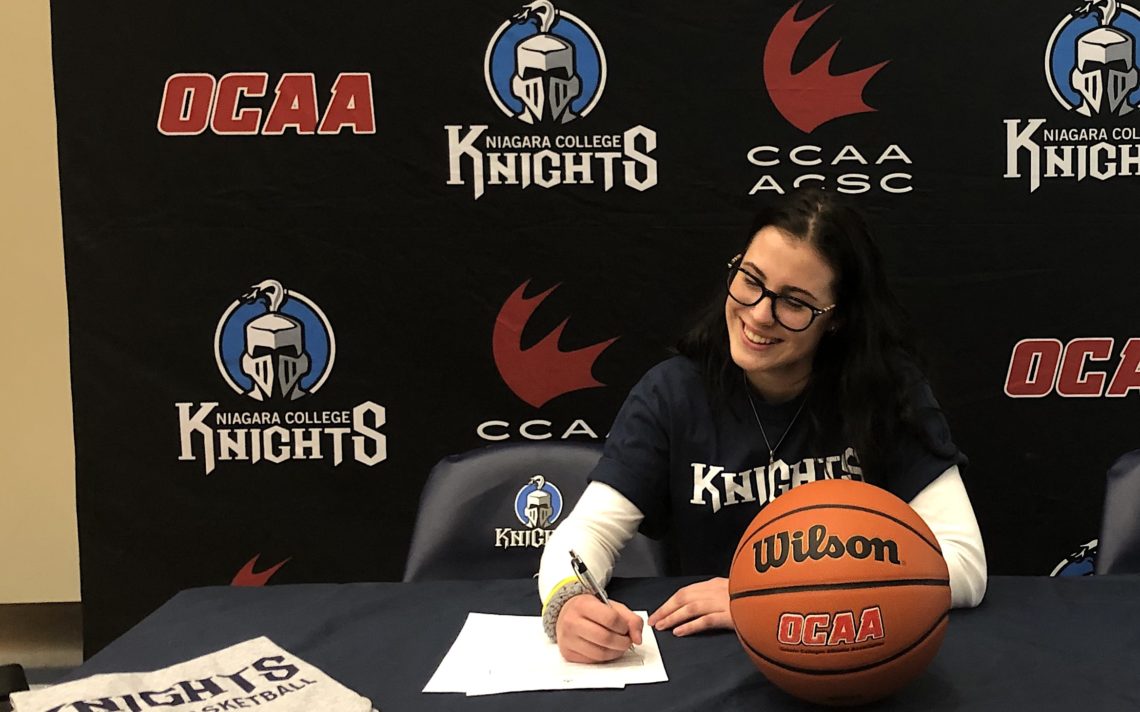 In the past week, the Niagara College women’s basketball head coach has added Grummett, Notre Dame’s Jamira Rousseau and Denis Morris’ Lexxus Bell to his roster.

“We are so excited to add Sydney for next season. Above all she’s a tremendous person that fits right away,” Rao said. “From a basketball perspective, she’s a strong physical player with great passing ability.”

He describes Grummett’s rebounding as her top skill.

“It’s extremely fun to watch her get her hands on a ball because once she does, it’s hers no matter what,” Rao said. “She’s having a great season with Frank Keltos with Niagara Juel and had an excellent year as one of the leaders of the E.L Crossley team that went to OFSAA (Ontario Federation of School Athletic Associations) under Aaron Belding. 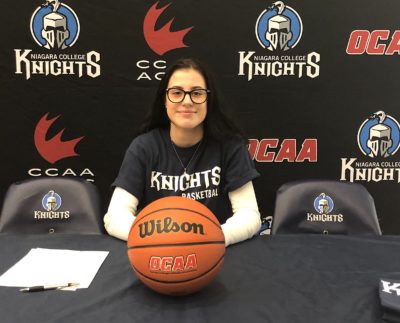 “The more Syd has the ball in her hands the better she will get over the next few months and into next year, continuing to develop her skills.”

The 18-year-old Fonthill resident was thrilled to sign with Niagara.

“Obviously it is very overwhelming and a lot going on but it is definitely a milestone that I have hit, for sure,” said the former Pelham Panthers and Niagara Rangers basketball player. “I am excited to start this new chapter in my life.”

Grummett had plenty of people on hand to watch the signing.

“It was nice to have prior coaches, current coaches, family, friends, past and present teammates there.”

She also had interest from Brock, Seneca and Laurentian before committing to Niagara.

“Obviously it is a little scary to go away so it is nice to stay home, stay local and a bunch of my friends are going so it’s not like I am going to go and not know anyone.”

Basketball is also a big part of it.

“I have practised with the girls a few times and been to the games and I think it is going to be a great dynamic to learn and play there.”

Grummett’s goal for her first Ontario Colleges Athletic Association season is to earn some playing time and go from there. 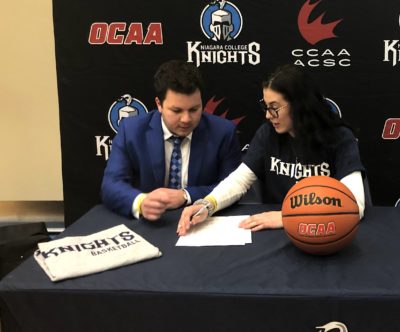 “I want to form great relationships, practise and train hard and try and push myself to a whole new level,” she said.

Improving her offence and becoming a little less selfless will be an area of focus.

“I want to take more shots, be a little bit more selfish with the ball and definitely work more on my offensive game.”

She has made great strides in her game since starting high school and wants to continue evolving upward.

“It kind of sparked when my brother (Tyler) passed away and I wanted to carry on that legacy with what he would have wanted to do,” she said. “I took on more of a leadership role, was there for others and pushed myself in what I could do.”

She wore the same No. 13 jersey as Tyler before his death and that continues to this day.

The number 13 also pops up when looking at the Niagara College career of her father Paul Grummett. He ended his Knights career as the 13th all-time leading scorer in the men’s program.

Syd is planning to study art and design foundations at Niagara with a goal of becoming an interior designer.

“I have always been a little bit artistic and enjoyed the arts and helping around the house and designing my own room inspires me to get into that. It is one of my passions.”

She is already preparing for her first season at Niagara.

“We are still in our Juel season so I will carry out that season and not let up in that,” she said. “I am going to work as hard as I always have, finish off the season, graduate, work over the summer and start up in September.”