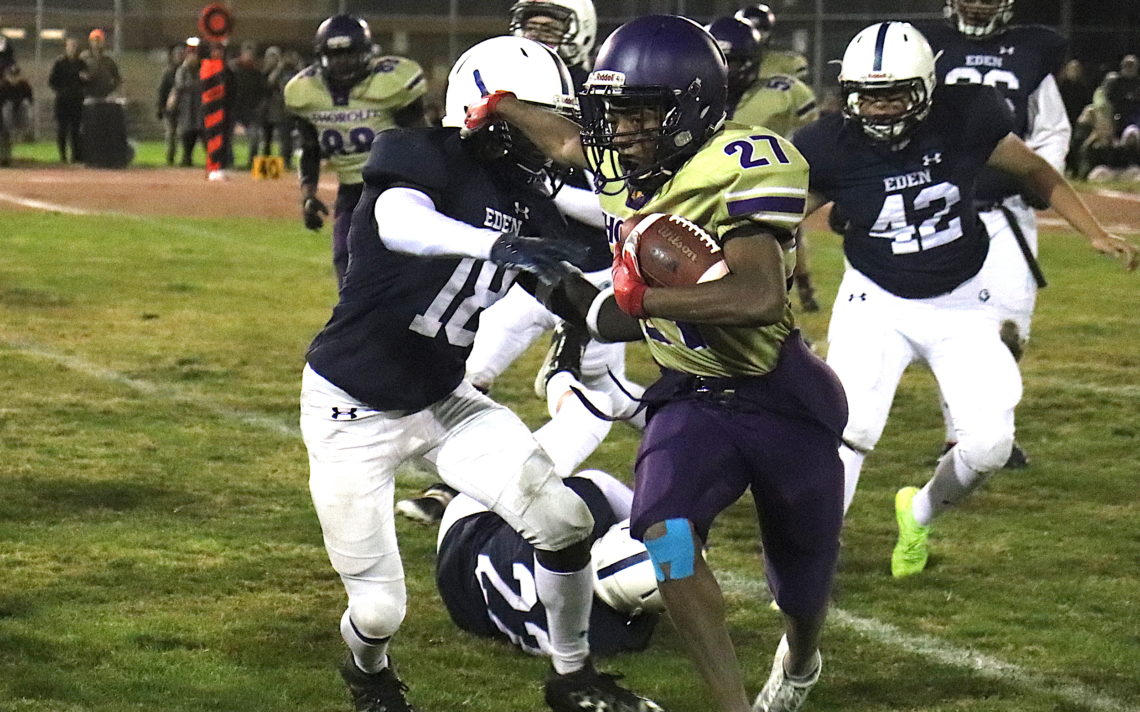 The Dirty Birds are back.

“To come back and work this hard was great for all these guys,” Thorold head coach Duane Kemp said. “This team is a returning team and to dig in and battle and put the work in is absolutely fantastic. I am so proud of every one of them because a lot of them could have said that this wasn’t for them. They have battled and brought us back to where we want to be.”

It was a little tense for Thorold for the first half of the semifinal but the Golden Eagles took command in the second half.

“We were a little tight at the start but our mentality on D has been to bend and not break and coach (Bill) McGarrigle has done a great job with the offence,” Kemp said. “He has got us humming and he has done a heckuva job. Teams try and take away one thing and so far we have been able to find ways to get other guys open. We get lots of guys involved in the offence and it is a great group to be around.”

Leading the way on offence for Thorold as he had done all year was quarterback Mark Suntz, who threw for three TDs and ran for another.

“He is very dynamic but I think the best thing about him is that he is such a great leader and a good kid,” Kemp said. “Kids rally around him. He wants it but he does it the right way. He is polite and the hardest-working guy in practice. If we need him to run he can run and if we need him to throw he can throw and he is like another coach on the field.”

The 12B student has grown nicely into the role of quarterback.

“I was young and didn’t get a lot of playing time and then COVID happened and messed up my Grade 11 year,” the 18-year-old said. “Last year was the first season I started and the year didn’t go as planned. But we came back this year and it is better than ever.”

The 6-foot-3, 180 pounder feels the Golden Eagles have developed a lot in one season.

“It was just a bunch of young kids last year and we didn’t have much experience and coming back from COVID was tough,” he said. “This year we came back better than ever and I am excited with these boys to have another week.”

“It is my mindset mainly. I am more physical and I am more calm in the pocket,” he said. “It is all mental reps and mental stuff, going over the playbook and stuff like that.”

He takes a lot of pride in being a team leader.

“I try to get the boys hyped up and make sure that are doing what they are supposed to be doing. I have their back and they have mine.”

After this year, Suntz plans to attend Niagara College and study to be a machinist.

Eden qualified for the Tier 2 semifinals after finishing sixth in the Tier 1 division with a 0-5 record. The Flyers trailed 6-0 into late in the second quarter before the Golden Eagles took control of the game.

“It has been a very long and rough season and this is kind of the end result of the way things played out this year,” Eden head coach Jeff Webster said.

The Flyers were beset by injuries and other issues.

One highlight of the game for Eden was seeing Elijah Prosper score on a 68-yard run on his first touch of the season. Prosper was hurt in the Spears season and made it back for the final game.

“I am happy he got the chance to do that,” Webster said.

Up next: Thorold will host Centennial in the Tier 2 championship game Nov. 4 at 5 p.m.

The Westlane Spartans advanced to the Tier 3 final against Stamford with a 34-0 victory over the visiting St. Catharines Collegiate Saints Friday.

“Today’s game was very physical,” Westlane coach Dean Mazzone said. “The defence attacked from all areas keeping Collegiate off balance. The offence came up with a few splash plays that resulted in points. We are pleased with the team’s effort.”

For Collegiate: Connor Hammond had seven carries for 48 yards and three receptions for 37 yards; Cole Adshead was 5-13 passing for 57 yards; and, Teagyn Wienst had six tackles and interception.

“It’s been a tough regular season not having any home games and practising on a small baseball outfield. To make things worse, we just finished playing three games in eight days,” Collegiate coach Nathan Greene said. “This has been a factor in our team being beaten up. We have five starters down with injury.”

Greene is pleased with his team.

“I am super proud of the depth players that stepped into these roles with little to no game experience. It’s tough for the seniors to play their last high school game,” he said. “There are always a few tears. The underclassmen benefitted from their leadership and they in turn will be asked to step up in a similar roles. I am sad to see our graduates moving on but it brings great excitement to think of the young players we are going to build with in subsequent years.” 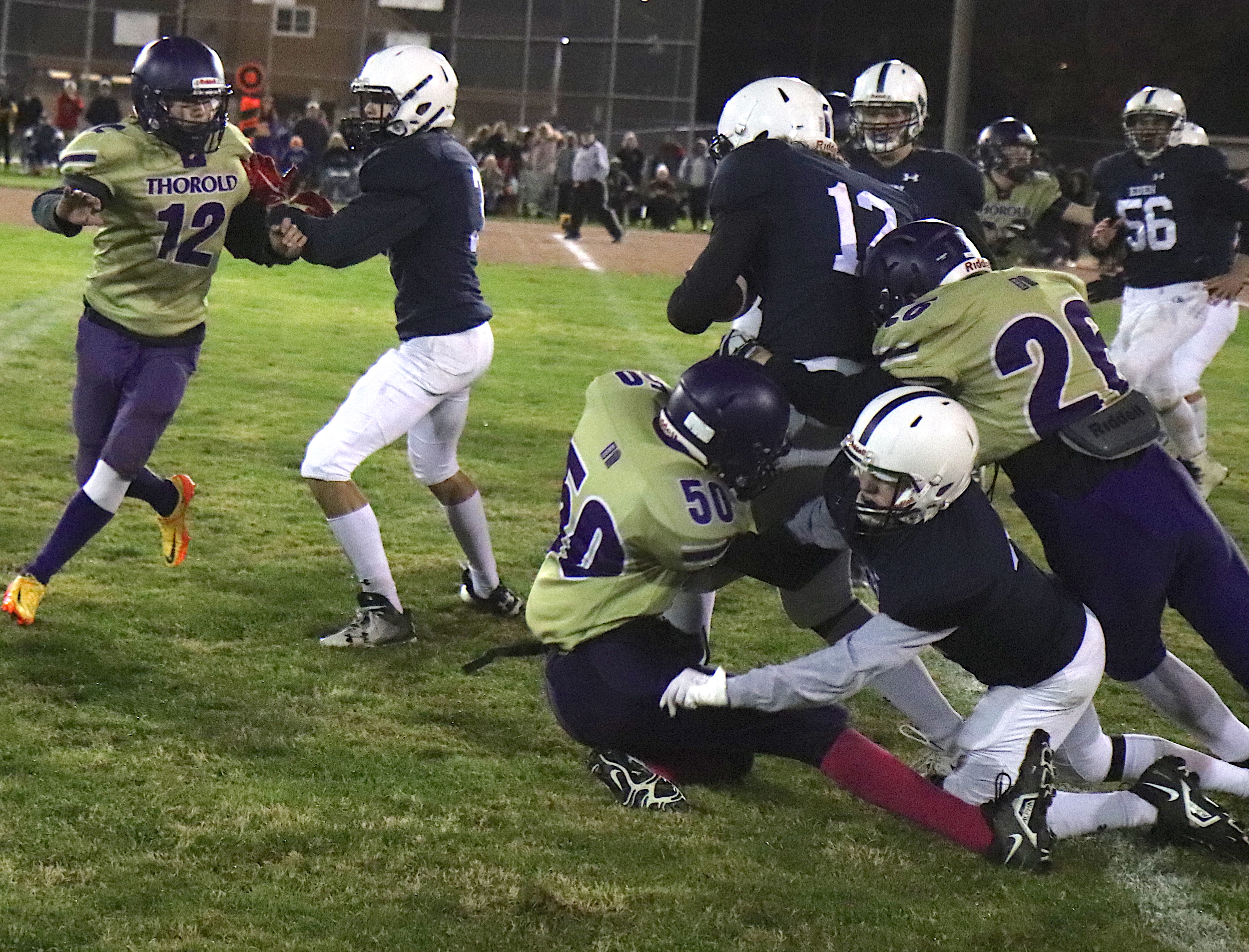