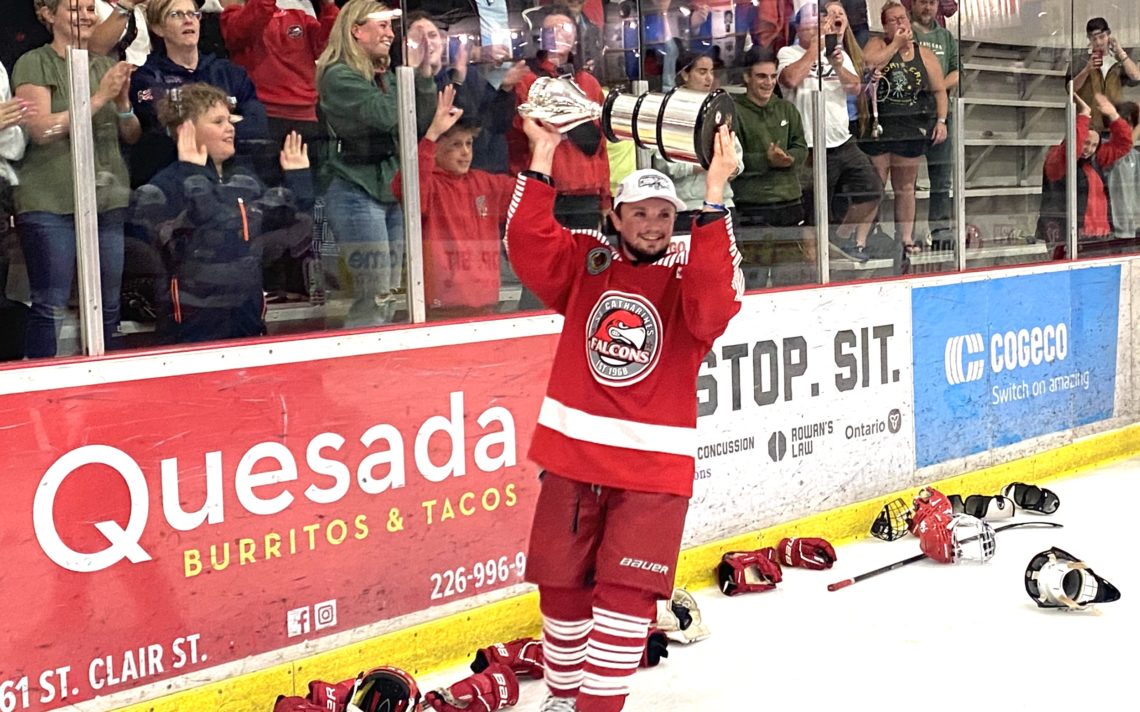 It’s been a short off-season for the St. Catharines Falcons.

The Falcons, who captured the second Sutherland Cup in their history only two months ago in Chatham, are already gearing up for the 2022/23 Greater Ontario Junior Hockey League season.

The regular season sked was released this week and sees the Falcons visit the Hamilton Kilty B’s Thursday, Sept. 8 to begin the season in a re-match of last year’s Golden Horseshoe final. The Falcons then host the Welland Junior Canadians Friday, Sept. 9, at 7 p.m. at their new home, the Seymour-Hannah Sports Complex.

“Especially when you play almost into June, but at the same time we’re itching to get back at it,” he said. “There’s still so much lost time through the pandemic that we’re gladly accepting the early start and be ready to go.

“I’m sure there will be a few growing pains like there are every season early but we’re prepared to do that work.”

Bielby is confident the Falcons will be able to turn the page and focus on the task at hand when training camp opens Friday, Aug. 22.

“I think the biggest thing is there’s not too much talk about last year at this point with the young men who are returning and the incoming players,” he said. “It’s about our goals and what we want to achieve this season and being consistent with that message just like we were when we were successful.”

Bielby is still waiting to hear details regarding the amenities for the Falcons at their new home.

“There was a lot of talk toward the end of the season about makeshift dressing rooms and how we’re going to go through this year but at this point the water is frozen which means we’ll be able to skate so we’ll show up,” he said.

The GOJHL schedule begins Wednesday, Sept. 7 when the London Nationals are on the road to take on the LaSalle Vipers. The opening week of the season will see 22 total games played.

“We are excited to return to action for the 2022-23 season,” GOJHL Commissioner Brent Garbutt said. “While we have seen a number of delays in recent years, we are hoping this year will see a return to what GOJHL fans are used to seeing with the regular season wrapping up in late February.”

The full 2022-23 GOJHL schedule for all teams is now available in the schedule section on the GOJHL website. https://www.gojhl.ca/stats/schedule

All 25 GOJHL teams will also be in competition September 23-25 at the GOJHL Showcase, hosted at the Meridian Community Centre in Pelham.https://www.gojhl.ca/2022-gojhl-showcase-schedule-announced.

The following are the openers for all eight Golden Horseshoe teams.