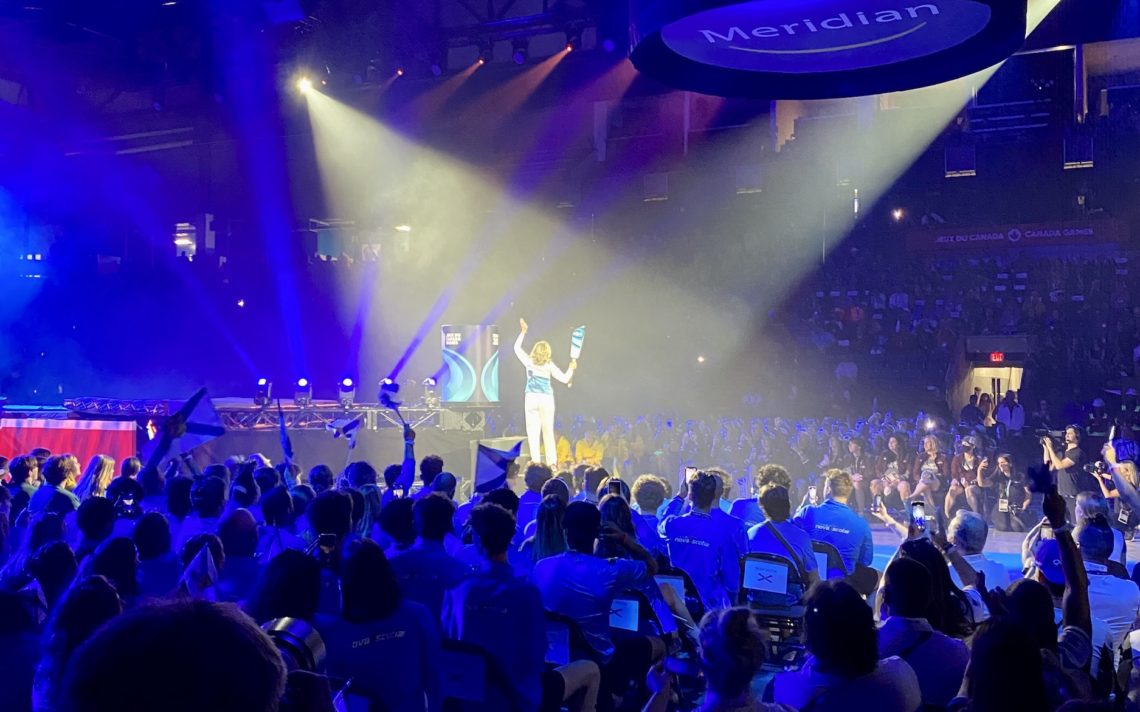 The coxie of the gold medal-winning women’s eight at the 2021 Summer Olympics had the honour of being the final torch bearer and igniting the Cauldron with the Canada Games Flame. Outside at the Canada Games Centre, the main Games Cauldron was lit simultaneously.

The torch was brought into the arena by the crew of the CSL Welland and the President and CEO of Canada Steamship Lines, Louis Martel, and passed over to Host Society Committee Board Chairman Doug Hamilton. He gave it to a Ridley College rowing crew before it eventually ended up in the hands of a thrilled Kit.

“It’s just such a big honour,” the 33-year-old St. Catharines native said. “When I was asked, back months and months ago, I messaged our high performance director, Adam Parfitt, and my head coach, Carol Love, right away. I had a big old group chat with them, and just said ‘It’s not a great time of the year, but I was asked to do this, be the final torch bearer for the Canada Games opening ceremony. ’ ”

Both told her she had to go because it was an honour and amazing for rowing.

Her excitement has been building and reached new levels at rehearsal Friday.

“I honest to God got goosebumps. I felt so much hype. I just thought, ‘Wow. I am so excited for these athletes that get to line up and race over the next two weeks.’ Being from St. Catharines, I am so proud to welcome Canada to the Niagara Region.”

For Kit, it’s a chance to finally attend an Opening Ceremony. As an athlete, she didn’t get to attend the opening of the 2012 and 2016 Paralympics or last year’s Summer Olympics.

“From that standpoint, I’m just so excited for the athletes, for the hype and for how the Niagara region is bringing it to its heart.”

Kit’s role in the Opening Ceremony is a continuation of her quest to be a role model and mentor to the next generation of athletes. She is humbled by that responsibility.

“My parents still live on Riverview Boulevard in St. Catharines. I’m one of three kids. I am a normal, average person. I was never meant to have this life.”

She is grateful for what rowing has given her.

“It’s shown me doors that I never knew existed. I know there’s people behind me that are clawing their way up the sports system right now, trying to give me a run for my money,” she said.

St. Catharines was the perfect place to start her career.

“We’re really lucky because rowing has such a phenomenal part of our fabric, of our culture, and I do feel that it’s my responsibility to bring awareness to that,” Kit said. “It’s my responsibility to keep bringing more and more people up through the ranks, using sport as a means for social mobility, for mobility for academic opportunities, I feel really strongly that I’m of the generation where I need to be bringing people up with me and show them that they can do it through their own actions.”

Kit is thankful to those she left behind at the national training centre in British Columbia for allowing her to pursue the opportunity.

“I explained to my teammates about this and a lot of them were actually Canada Summer Games alum so they get it, but they were really, really supportive with me coming to St. Catharines at this time of the year. I wanna give them all a really big shout out, because they’re really covering for me right now.”

That thank you extends to her coaches.

“I’m in selection for the World Championships right now, so it’s not a great time but at the same time, this is a once in a lifetime opportunity.”

Kit, who coxied Canada’s women’s eight to a silver medal at this year’s Lucerne World Cup, would love to be selected to crew heading to the worlds in Račice, Czech Republic.

“That would be really cool for me because it is actually the site of my first world rowing event. I went to my first rowing championship in the women’s eight in 2009 in Račice. It was the first time I got to wear the maple leaf and it would be really special to go back.”

After videotaped welcoming remarks from Niagara Regional Chair Jim Bradley Saturday night, the athletes paraded into the arena in alphabetical order with the exception of host Team Ontario, which entered the Meridian Centre last.

As each team entered, a provincial and territorial representative handed the provincial flag to each team’s flag bearer. The athletes showed their enthusiasm by waving flags, posing for selfies and generally having a great time.

Youth Indigenous Ambassador Kya Steinbach-Parker welcomed the athletes and invited them to reflect on the statement ‘Every Child Matters’. Steinbach-Parker was joined by Indigenous drummers under the direction of Gary Parker, Tonawanda Seneca Territory, faithkeeper, community leader, language speaker and cultural adviser.

A massive clap of thunder and images of Niagara Falls, shown through lighting effects on water projection screens were shown as Steinbach-Parker was joined on stage by Juno-award winning artist DJ Shub, Metis fiddler Alyssa Delbaere-Sawshukand, Metis jigger Kyle Burton and hoop dancer Myranda Spence. As the performance was happening, the athletes on the floor and in the stands were doing the wave.

Singing the national anthem was visually impaired singer Simone Soman. Members of Fort George’s 41st Regiment of Foot Fife and Drum Corps served as an honour guard for the Canada flag and community youth ambassadors from across Niagara created a flag corp.

Federal Minister of Sport, Pascale St-Onge, brought greetings from the Government of Canada and officially declared the 2022 Games open.

Niagara’s francophone community welcomed the athletes. Award-winning jazz vocalist Juliet Dunn performed the official song of Franco-Ontarians, Mon Beau Drapeau, and students from La Boîte à Soleil, a Francophone Child Care Centre in Niagara, waved the Franco-Ontarian Flag. The athletes in the stands and on the arena floor shone their phone flashlights during the song.

Neil Lumsden, Ontario’s Minister of Tourism, Culture and Sport, brought greetings from the Province of Ontario and called for the official Canada Games flag.

“First I got to say how cool is this?” Lumsden said. “This is unbelievable.”

He drew some friendly boos when he told the nation’s athletes that Ontario was the team to beat.

“Strap it on and get ready to go,” he said

Mayors and or representatives from all 12 host communities welcomed the Canada Games Flag to Niagara.

Following the reading of the officials’, spectators’, coaches’ and athletes’ oaths, a video was shown, recounting the journey of the Rory McLenahan Torch from Ottawa, up the Welland Canal and through all the stops in Niagara.

Artist POESY performed the bilingual Canada Games anthem Steel Heart accompanied by a performance from the Ceremonies Dance Corp, made up of dancers from the Brock Badgers Dance Pak.

Country singer Tim Hicks closed out the ceremony by singing Here Comes the Thunder and No Truck Song. He was accompanied by aerial performers, gymnasts, dancers and specialty performers. A canal cargo ship housing a trampoline for high-flying stunts and acrobatics completed the spectacle.

It was a great show. 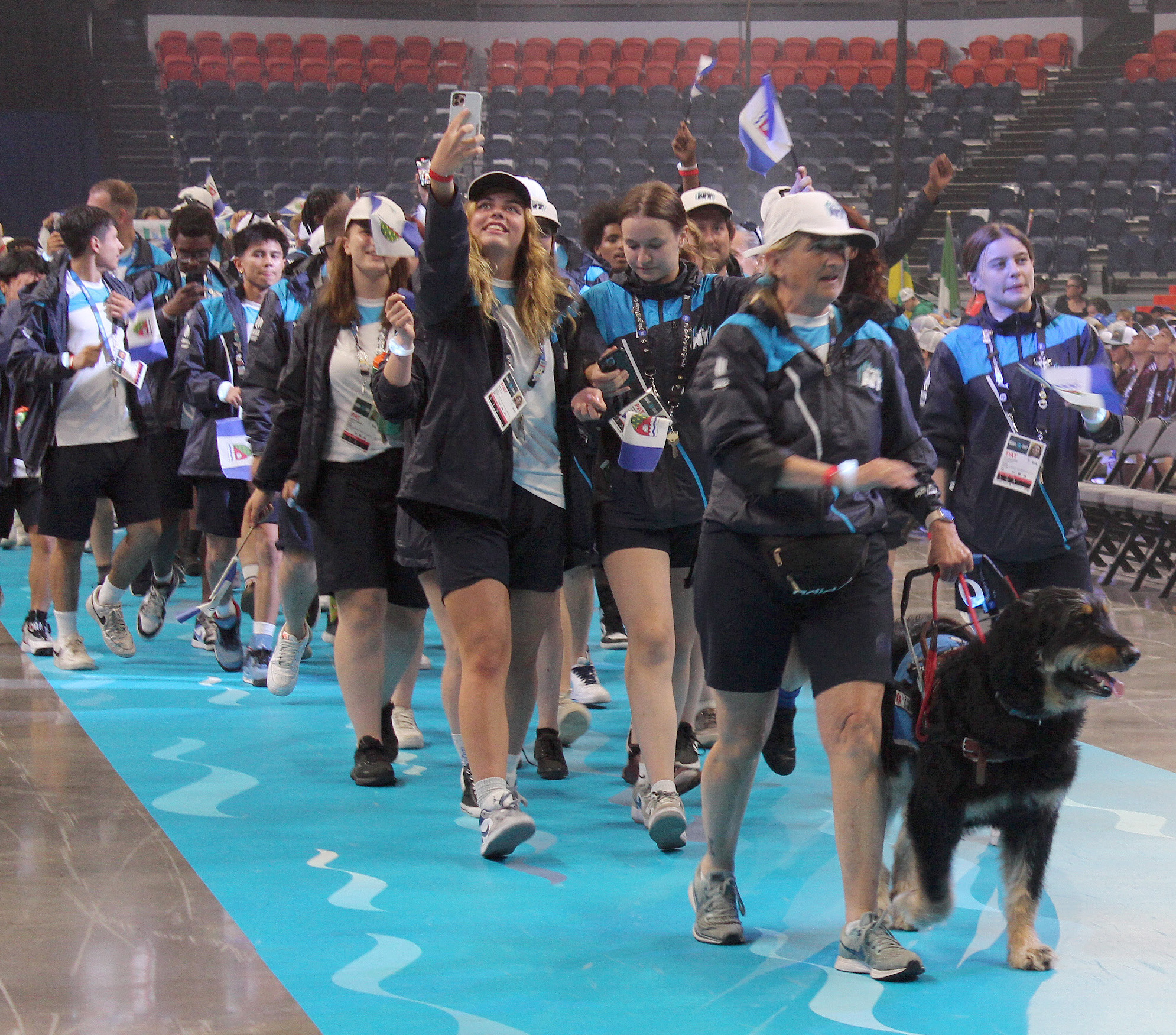 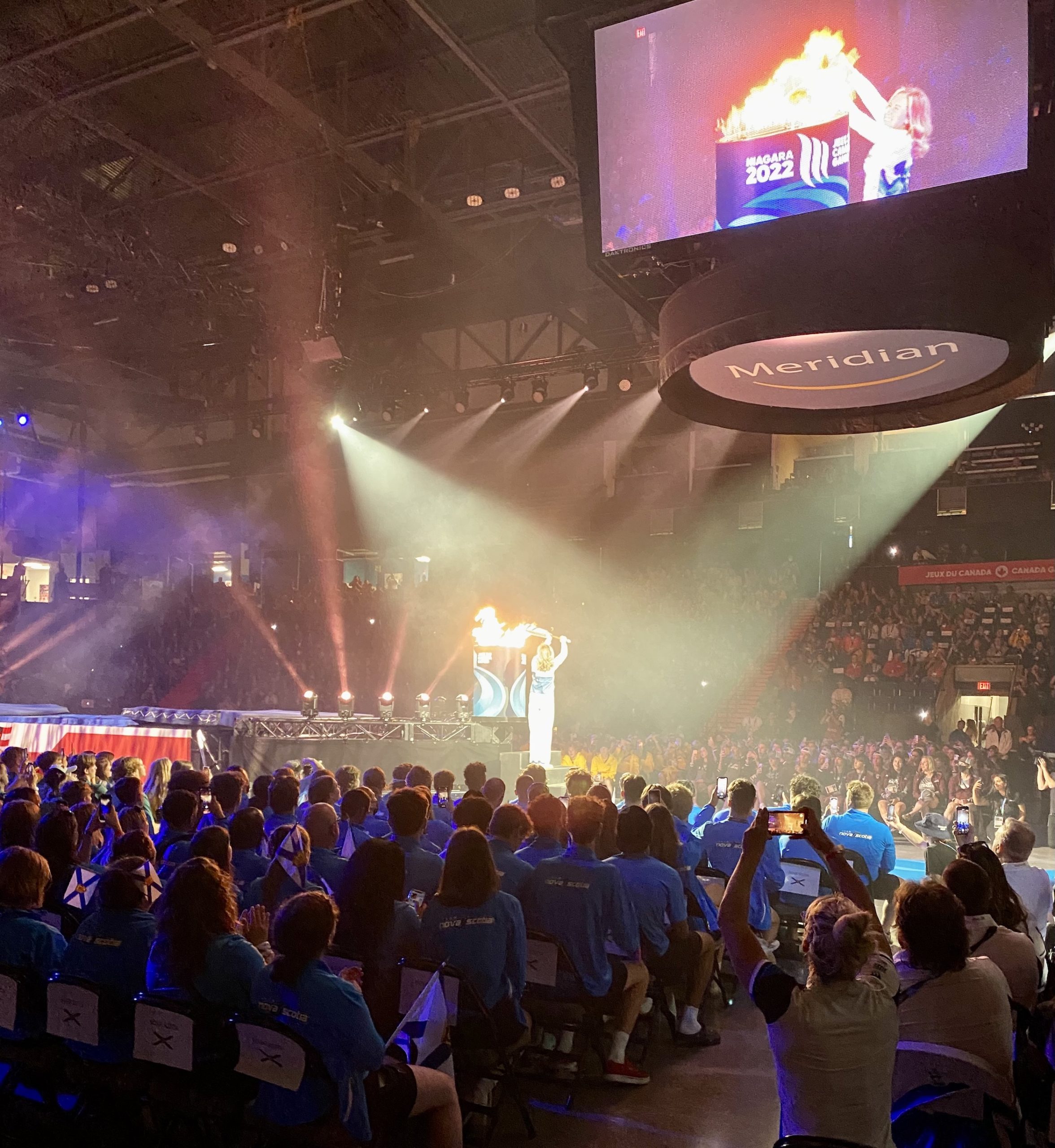