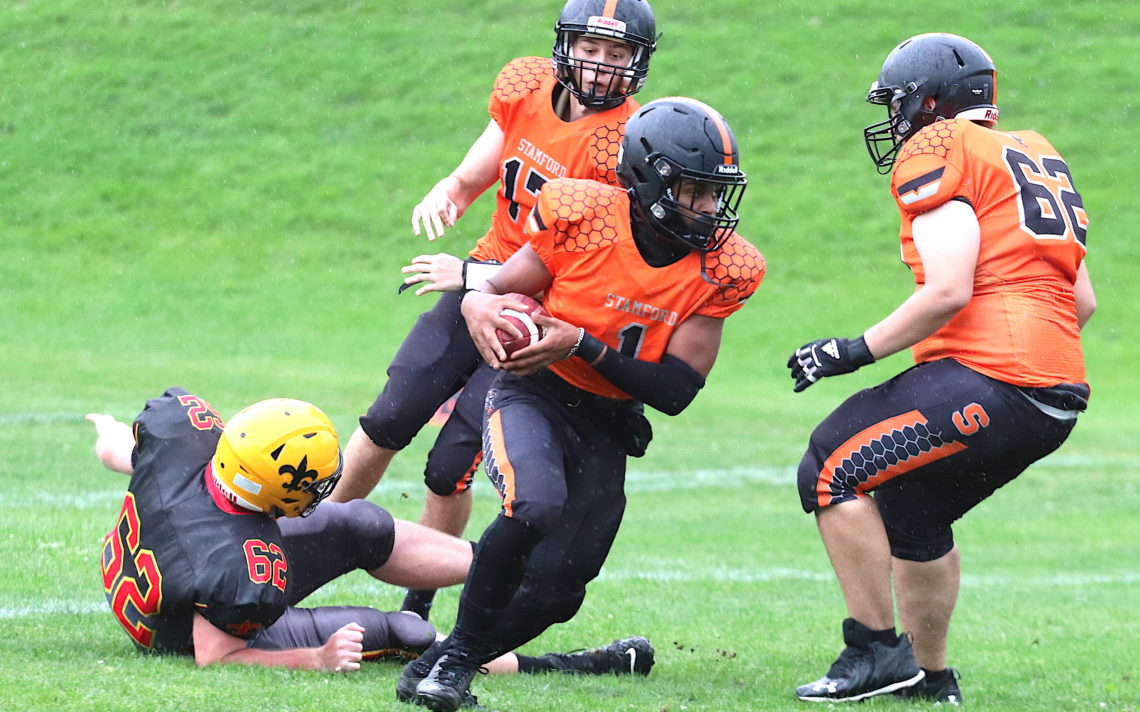 Senior football made a triumphant return to Stamford Collegiate Wednesday afternoon with the Hornets recording a 40-13 victory over the visiting St. Catharines Collegiate Saints in the opening game of Niagara Region High School Athletic Association play.

In 2017, Stamford and Westlane combined on a senior team and played mostly under Westlane’s name and colours. Both schools are fielding senior squads this season.

“My brother played here, it is really fun and we have the tradition back. The first win felt really great,” said Stamford defensive tackle/left guard/centre Zach Medford, who had a fumble recovery in the game.

The 17-year-old Niagara Falls resident played three seasons at Westlane and was thrilled to be back home for his 12B season.

“We have a great tradition here so why break it? This team has been here a long ass time and we haven’t been here for a number of years. Now we got it back and it is amazing.”

There were plenty of fans on hand to watch the game.

“It was super fun, the team over there was great and we have a bunch of dogs,” said the 5-foot-10, 240-pound Medford. “It was incredible. I am so glad how everyone came out for this, even in the rain.”

The Niagara Spears player was grateful to his former team for giving him a chance to play.

“I am really thankful for Westlane and they have a great program there. They’re good.”

That being said, Martin is glad to be back home.

“The program started in 1928 and the kids approached me that they wanted to have a program. We had a little meeting and then we had 40 kids show up. The kids have bought in and we have good numbers at practice.”

Martin had plenty of help in getting the Hornets back on the field.

“Neil Sheard our principal, Ann Gilmore our superintendent and Stamford people made it happen and without them it wouldn’t have happened.”

The Hornets’ roster is a mixed bag.

“I have kids who haven’t played before and that showed in the first half with a number of mistakes that we made,” Martin said. “But we got better as the game progressed. We didn’t have a preseason game so we banged the rust off and St. Catharines Collegiate played a pretty good game.”

Martin is looking forward to see how the season plays out.

“We have always had a good tradition and culture here and we want to rebuild it. Some of the kids have never been in orange and black and they are learning it,” he said. “Stamford had an amazing alumni and an amazing community and they have all been super supportive in helping us setback on our feet. They are showing up at our games and I love this field. A lot of people don’t.”

Medford is a big part of the Hornets.

“Zach is an amazing young man, He is 12B and he is heavily involved in the school. He is an excellent person in the locker room,” Martin said.

He describes Medford as a solid player.

“He had a full season with the Spears on the D line and he is very good. He is our anchor. We are solid in some spots and other spots we are green. It will just take work.”

Collegiate started strong and trailed 14-7 at the half before the Hornets took control of the game in the second half.

“I think our depth caught up to us in the second half and we ran out of gas,” Collegiate head coach Nathan Greene said. “We have a lot of two-way players and we only had three weeks to prepare for this game. We have a bye next week and we will take advantage of that and hopefully we will be able to limit the amount of players going both ways.”

Despite the final score, there was lots to like about the Saints’ opening game. They look like a football team.

“We have turned the corner in terms of culture and the kids have really bought in terms of a football family and committing to the team,” he said. “We are looking forward to working with the group over the rest of the year.”

The team is also benefiting from having seven or eight players take part in the Niagara Regional Minor Football Association’s summer football league and others competing in Niagara Youth Flag Football action.

“They got reps that they never would have had and it was a great opportunity for them to increase their experience level,” Greene said.

Cat’s Caboose Player of the Game: Stamford’s Owen Pfielsticker with two TDs; a two-point convert and a fumble recovery. 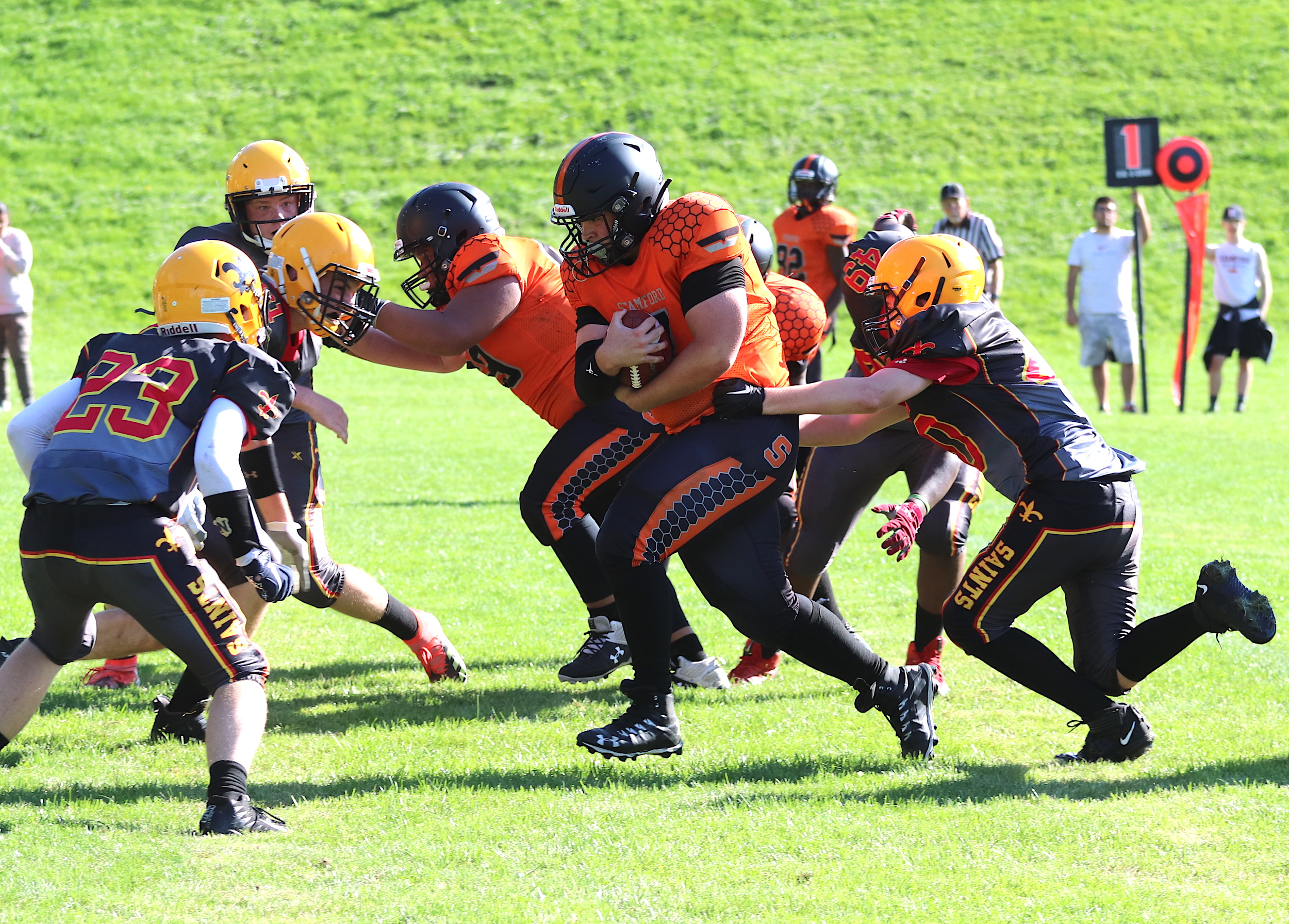 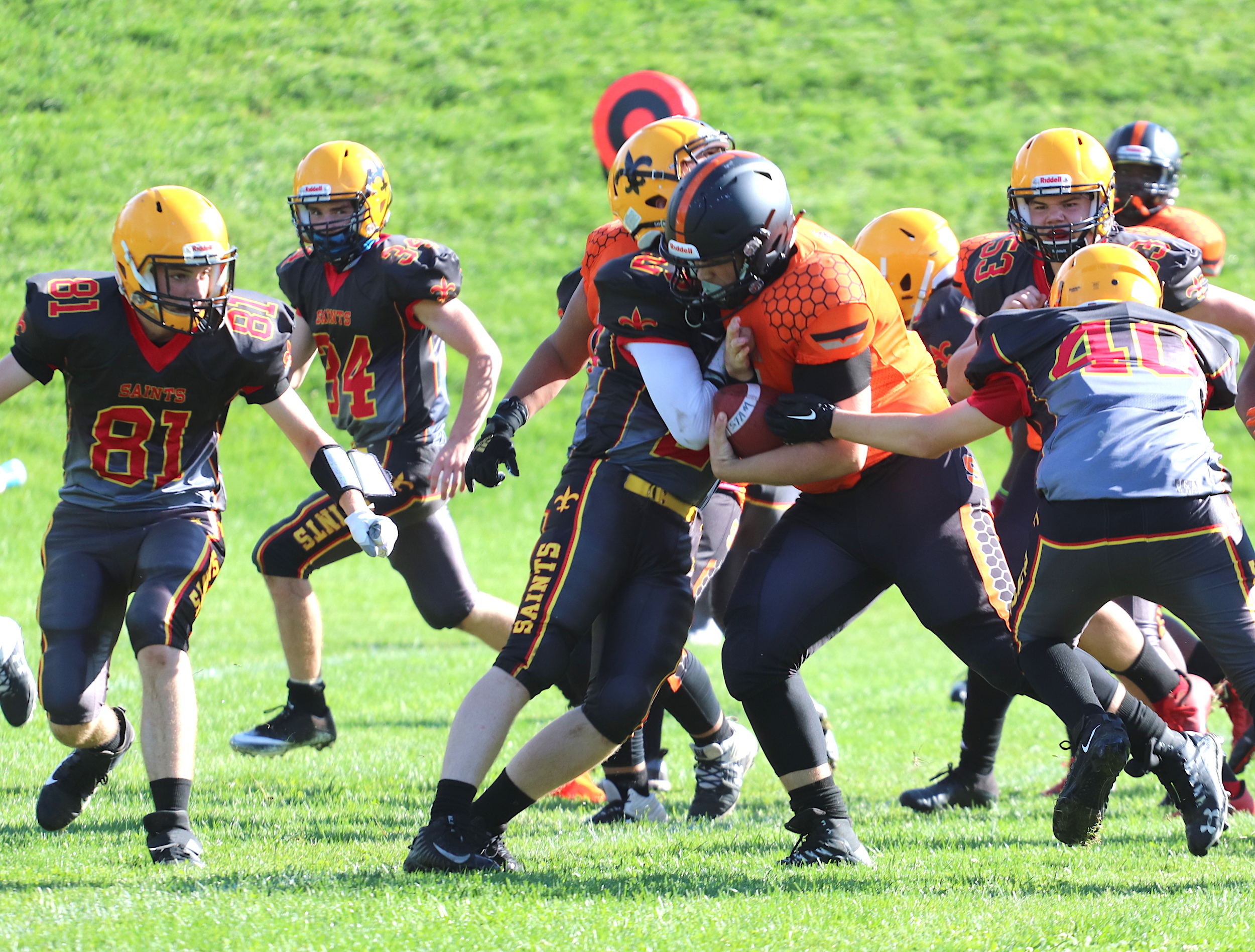