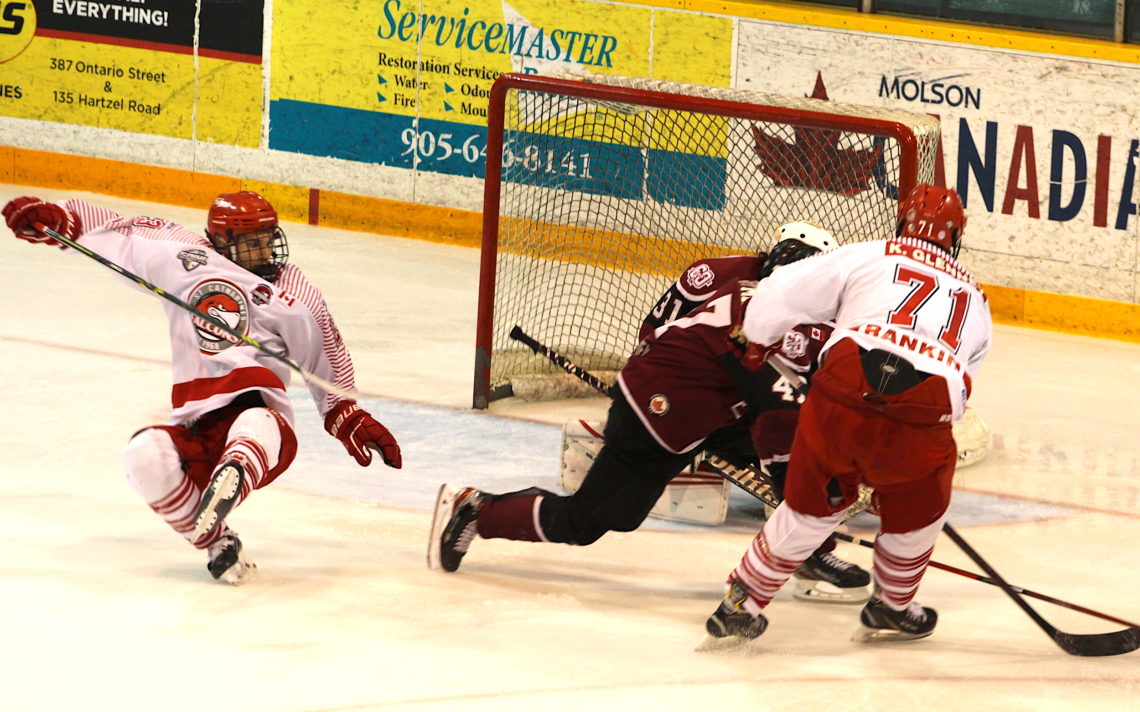 Falcons on the cusp of championship

Kyle Glenney is playing his best hockey of the season when it counts the most.

The 19-year-old veteran continued his hot streak with another goal as the St. Catharines Falcons topped the Chatham Maroons 6-2 Friday night at Jack Gatecliff Arena in Game 1 of the best-of-three Sutherland Cup championship final.

The Falcons can bring home their second Ontario championship in franchise history with a win in Game 2 Sunday night in Chatham. Game 3, if necessary, is Tuesday in St. Catharines.

“It’s the best,” Glenney said when asked how he felt about his recent offensive contributions. “I hadn’t scored in a while so to figure it out now, to keep getting goals to help the team, it’s pretty special.”

Glenney has scored four games in a row, something not lost on St. Catharines head coach Tyler Bielby.

“He’s been a big part of our team all year five-on-five,” Bielby said. “He’s a 20-goal scorer and we need him to score goals for us to be successful and he’s had a few in a row where he’s getting them.”

Glenney is enjoying every minute of the ride as the Falcons attempt to win their first Sutherland Cup in 10 years.

“I played nine or 10 years of minor hockey and never went to the OMHAs once,” he said. “This is my first run at a championship. You’re on a high every single day.

Glenney is confident the Falcons won’t be overconfident going into Chatham.

“It’s tough in a two-of-three,” Glenney said. “It’s tough for both teams but to get the win tonight, get a good sleep, get another good sleep tomorrow, keep a good routine and we’ll take care of business.”

Bielby isn’t worried about the Falcons putting the cart before the horse either.

St. Catharines had one of their best opening periods of the playoffs, but managed only a 2-1 lead after 20 minutes.

“I thought in the first period they came out like a cannon,” Bielby said. “I thought we were flying.”

The teams exchanged goals in the second as St. Catharines clung to a 3-2 lead heading into the third.

“There’s guys blocking shots. It’s late, it’s a grind. Guys are beat up, they’re tired and doing everything they can to find ways to win,” Bielby added.

Luca Testa and Noah Reinhart then scored five minutes apart in the third to extend the lead to 5-2 before Jonah Borria netted his second of the night into an empty net to conclude the scoring.

“It was a 3-2 hockey game and rather than fold up like a cheap lawn chair, we had a couple of young guys open up the scoring for us and give us some breathing room,” Bielby said.

If the Falcons do win the championship Sunday, they will have played their final game at The Jack.

Bielby is attempting to enjoy the ride as much as possible.

“There’s no place I’d rather be than with this group of guys going after this last win,” he said.

Kyle Glenney with a goal to extend his scoring streak to four games.