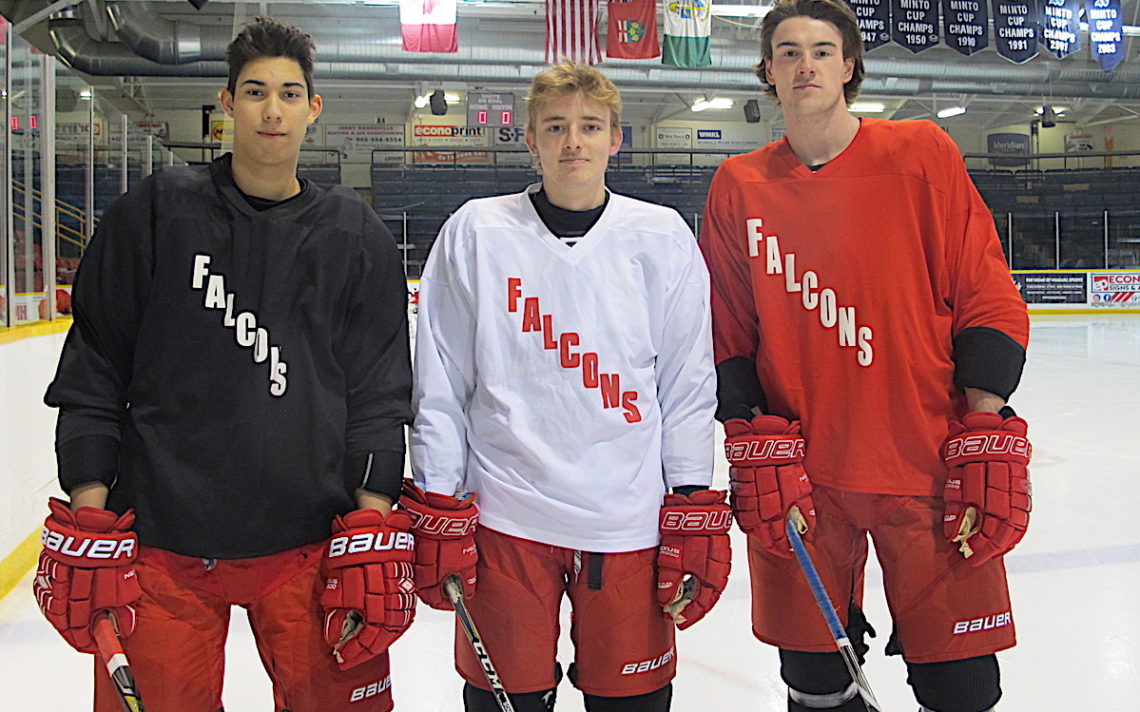 Tanner Brown, Andrew Somerville and Liam Dunda are the newest members of the St. Catharines Falcons. PHOTO BY: BILL POTRECZ

The St. Catharines Falcons got an early jump on the trade deadline.

The junior B hockey club reshaped its roster, adding a pair of players with major junior experience as well as a solid defenceman in a trio of deals before next Wednesday’s deadline.

Forwards Liam Dunda and Andrew Somerville and defenceman Tanner Brown will be in the lineup Sunday when the Falcons return from the Christmas break with a game at Pelham.

Dunda is the crown jewel of the new additions, a 6-foot-4, 217-pound winger with four years of experience in the Ontario Hockey League with the Plymouth Whalers, Owen Sound Attack and Sudbury Wolves. He was a sixth-round selection of the St. Louis Blues in the 2015 National Hockey League draft.

“We got the phone call he wanted to play for the St. Catharines Falcons. We were surprised but he was a player who we couldn’t give up. We had to get him,” Falcons general manager/coach Frank Girhiny said. “You look at the presence he has and has been offered by a number of schools to play CIS (Canadian Interuniversity Sport now U Sports).

“He’s still wired to continue to play. He has so much veteran presence. We just couldn’t pass him up.”

Dunda, who cost the Falcons a pair of 20-year-old cards because he has never played in the Greater Ontario Junior Hockey League previously and has OHL experience, began this season with the Moncton Wildcats of the Quebec Major Junior League where he had four goals and 167 points in 33 games.

He is thrilled to be finishing his junior career at home.

“I only have a couple of months left in my junior career and I wanted to have fun and try and win something before I go away to university,” Dunda said. “I thought about it before the season even started. I had an opportunity to go out east and then came home for Christmas and had a lot of fun with my friends and family.

“It was appealing to me and I know this team is real good and has a good shot at going to the Sutherland Cup this year. I’m living at home and I haven’t lived at home since I was 15. This was a great opportunity for me.”

Dunda’s brother, Riley Dunda, is a former Falcon who suffered a stroke a few years ago but is now attending school at Mohawk in Hamilton and doing well.

To make room for Dunda, the Falcons were forced to part with 20-year-old forward Tanner Ferreira and 20-year-old defenceman Dante Copps, who were peddled to the Niagara Falls Canucks for Brown, an 18-year-old native of Pelham.

“He’s a solid skater and moves the puck well,” Falcons coach Dan Fitzgerald said. “He has some untapped potential so that’s exciting for us.”

Brown admitted the deal caught him off guard.

“It was kind of surprising. I woke up to a text from (Canucks coach) Frank (Pietrangelo) to call him right away and he told me I was traded to the Falcons,” Brown said. “It took me by surprise.”

Brown should provide the Falcons with another capable blue-liner.

“It (trade) gives me a chance to win here. I was a first-liner in the Falls and I’ll have to see where I fit in here,” said Brown, who played for the Southern Tier Admirals in his minor midget season before heading to Ottawa where he attended a prep school before retuning to Niagara.

Somerville is an 18-year-old St. Catharines native who played 11 games for the Niagara IceDogs last season and four for the Guelph Storm this year. He was acquired from the Fort Erie Meteors in exchange for forward Evan Miller.

“I was really excited because I would be playing for a better team and I knew I could help the team try to go on and win a Sutherland Cup,” said Somerville, who had two goals and 20 points in 16 games for the Meteors.

The Falcons expect to use the speedy Somerville at forward. He has also played a good deal of defence in his career.

Girhiny is excited to what Somerville will bring to the table for the Falcons.

“He’s a fast skater who’s exceptionally skilled and has played at a high level in this league,” Girhiny said. “He’s a real good junior B player who should add some offensive punch to our lineup.”

Girhiny was happy to get the deals done ahead of the deadline.

“It’s the 50th anniversary and want to have a good opportunity to win a Sutherland Cup.”