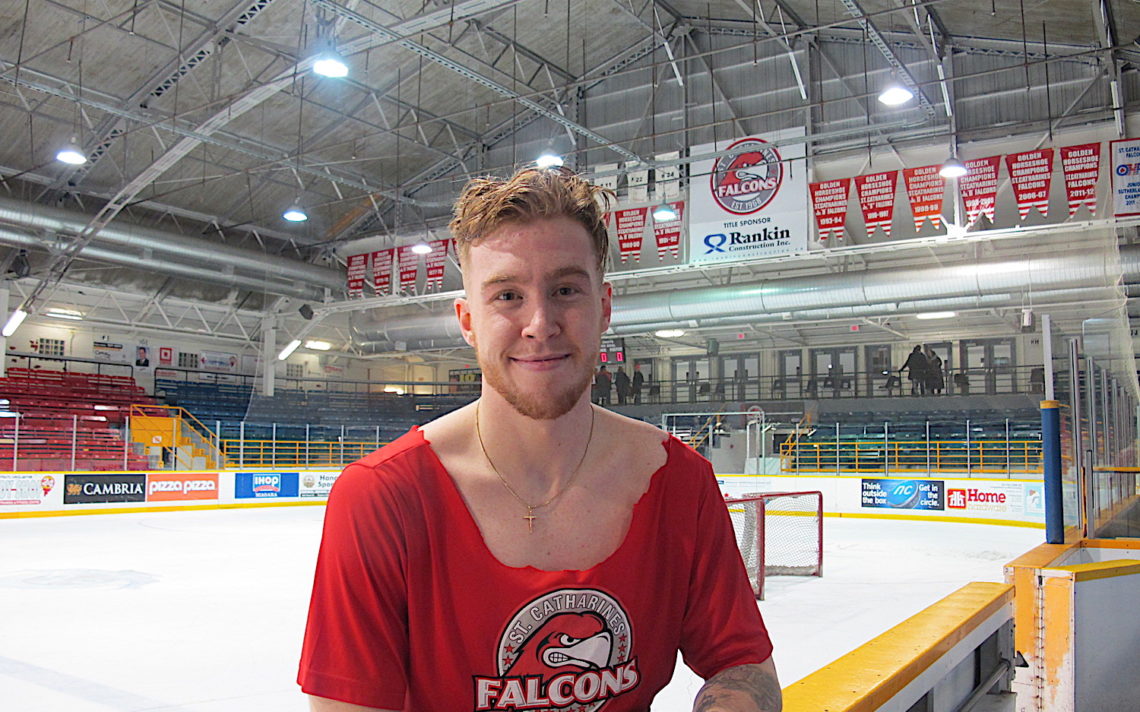 Hockey appears to be fun again for Michael Davies.

But somewhere during the early days of the season Davies got injured and things went south. A knee injury kept him out of the lineup and when he did return, the big forward didn’t appear the same.

Davies looked like himself and then some Friday, collecting two goals and an assist, as the Falcons defeated the Niagara Falls Canucks 4-1 in a Greater Ontario Junior Hockey League, Golden Horseshoe Conference game at Jack Gatecliff Arena.

The win improves St. Catharines’ record to 26-7-1-2 and moves them past Niagara Falls and into sole possession of third place by one point. The Falcons also own a pair of games in hand.

Davies, who joined the Falcons this season after 217 games in the Ontario Hockey League with Kitchener and Saginaw, admitted things are on the upswing for him.

“I was going through a little tough time personally but everything is back to normal,” Davies said. “We have a good group in here and it’s fun having won three in a row since the new year.”

Davies and newcomer Liam Dunda were dynamite together on a line, each combining for three points.

“We sort of grew up playing together so it’s nice having him back around,” Davies said of Dunda. “There’s definitely some chemistry there. It’s only been a couple of weeks of practice so once we get going it’s going to be scary.”

Falcons coach Dan Fitzgerald said he can see a difference in Davies, who recently was named an assistant captain. The organization earlier in the season took the C away from Davies and the A away from the assistants.

“I think maybe it was a little bit of a reset,” Fitzgerald said. “He’s been fantastic coming down the wing and making plays. We’re really happy with his game.”

Fitzgerald, too, likes the Davies-Dunda combo.

“It’s going to be a feeling out process for them but I like the way they click together,” he said.

The Canucks jumped out to a 1-0 lead with an early goal by GOJHL scoring leader Frank Pucci, who deflected a perfect pass from Justin Kyle. Dunda replied for the Falcons later in the period when he fired a shot home after some strong work behind the net from Davies.

The Falcons took control in the second period scoring three times in just over six minutes, including a pair of goals just 18 seconds apart.

That lapse, according to Niagara Falls coach Frank Pietrangelo, played a big part in his team’s defeat.

“They scored quickly on our mistakes,” Pietrangelo said. “You can’t have those lapses against good hockey teams.”

The loss was the first in regulation time for Niagara Falls since a 9-2 loss to Caledonia Dec. 8.

The teams play again Sunday at 3 p.m. at the Gale Centre.

“We have to come back and play well,” Pietrangelo said. “It’s easy to make excuses but we’re missing some guns. It’s tough to play at a level like this when you have guys out of the lineup. We have to find a way to come back Sunday and be at our best.

Falcon facts: Kyle West (upper body) and Gianluca Fuoco (suspension) did not dress for the Falcons . . . Tanner Ferreira, Owen Green and Garrett Downie were scratched for the Canucks with injuries  . . . Falcon alumni from 1998-2007 were honoured before the game  . . . The Falcons will make up their home game versus Buffalo from last week which was postponed due to the weather on Monday, Feb. 12.

BPSN Star of the Game: Falcons forward Mike Davies with two goals and an assist.

Up next: Falcons at Canucks, Sunday, 3 p.m. The Caledonia Corvairs visit Tuesday.