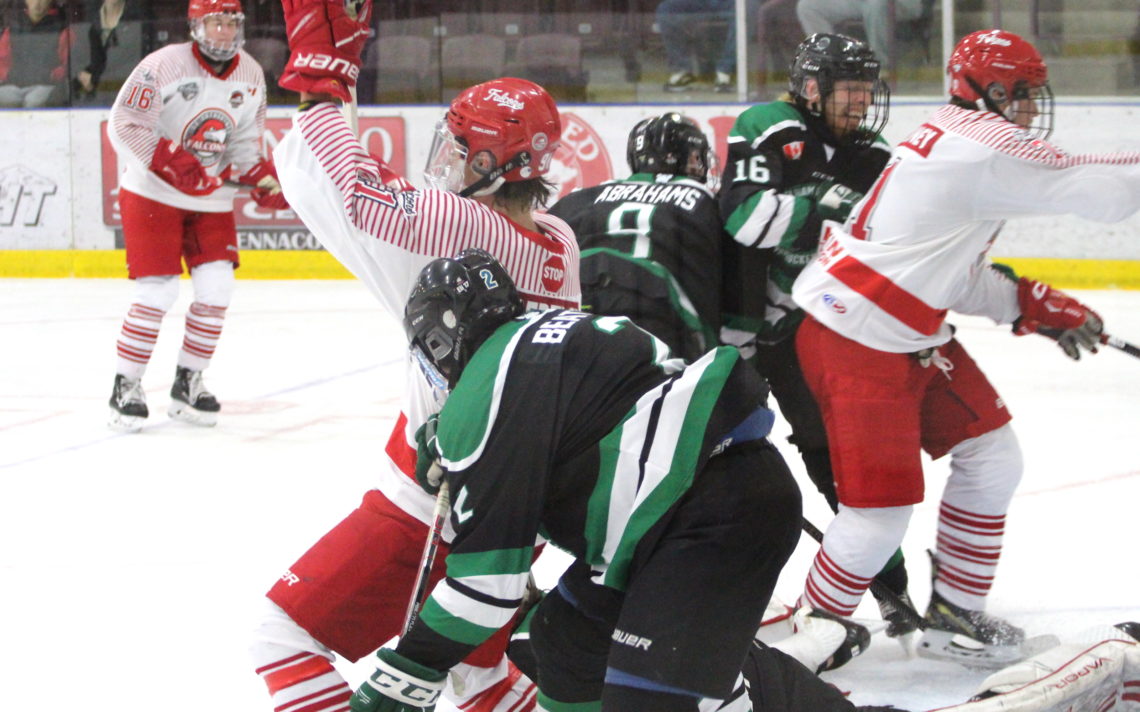 Cal Petrovsky has no issue with being a small fish in a big pond.

The 17-year-old forward was an associated player with the Pelham Panthers last season as a rookie where he got his feet wet at the junior level, scoring four goals in 10 games.

Petrovsky earned a spot with the St. Catharines Falcons this season and Friday finally got his first goal of the season.

“It was great,” Petrovsky said. “I’ve been working hard to get it and I was glad to finally get one.”

Petrovsky’s goal helped the Falcons to a 5-0 victory over the Panthers in a Greater Ontario Junior Hockey League, Golden Horseshoe Conference game at the Seymour-Hannah Complex.

“He works hard, it’s honest every night,” Bielby said. “He asks questions and really loves the game and is loved by his teammates as well.

“Zach Schipper (assistant general manager) messaged me today that Petro is getting his first goal today so it was nice to see. He’s deserved a goal already. He’s played hard and honest so everyone in that room was happy to see it fall for him tonight.”

Petrovsky enjoyed his experience in Pelham but was thinking big picture when he tried out for the Falcons.

“It was a good learning experience,” he said of his time with the Panthers. “It’s much faster at this level of hockey so it was a good step.

“This team won the Sutherland Cup last year and we want to do that again this year so this is the place to be. I just want to win.”

Petrovsky has seen limited duty with the Falcons but has no problem biding his time.

“It’s not that hard. We have a great group of guys here and everyone picks each other up. I just want to work and get my ice and pick up other guys,” he said.

Bielby gave Petrovsky a huge compliment, comparing him to the hard-working Mitch Armstrong.

“When we look at a guy like Mitch Armstrong last year and how he was able to help us being on pucks and just being that buzzsaw, we get something similar out of 15,” Bielby said.

The victory improved the Falcons record to 20-3-2 and moved them into first place by one point over the idle Hamilton Kilty B’s. The Falcons also own a game in hand.

It was the second straight shutout for Josh Johnson who also blanked Caledonia last week.

Bielby would have liked to see the Falcons turn in a more consistent effort.

“You have to finish 60 minutes no matter what the score is,” he said. “It goes back to the process, it comes back to what’s happening in four or five months from now. It’s difficult to stay up and you try and do a little too much and that’s when you start giving pucks away and turn pucks over.

“It seems to be something these guys buy into and that’s why I want them to buy into it even more when we’re fighting for that goose egg for their goalie. They gave up too many chances for my liking.”

The Panthers, already ravaged with injuries, lost forwards Ty Boone and Dawson Abrahams to injuries during the game.

Falcon facts: Colin Ewing, Mitch Dymtrow, Owen Day and Mitch Armstrong were scratched for the Falcons  . . . The Falcons will be accepting donations to the Community Care food and toy drive at their home games Dec. 9 and 16 . . . Fort Erie topped Thorold 4-1 while Niagara Falls blanked Welland 3-0.

St. Catharines forward Cal Petrovsky with a goal and an assist.