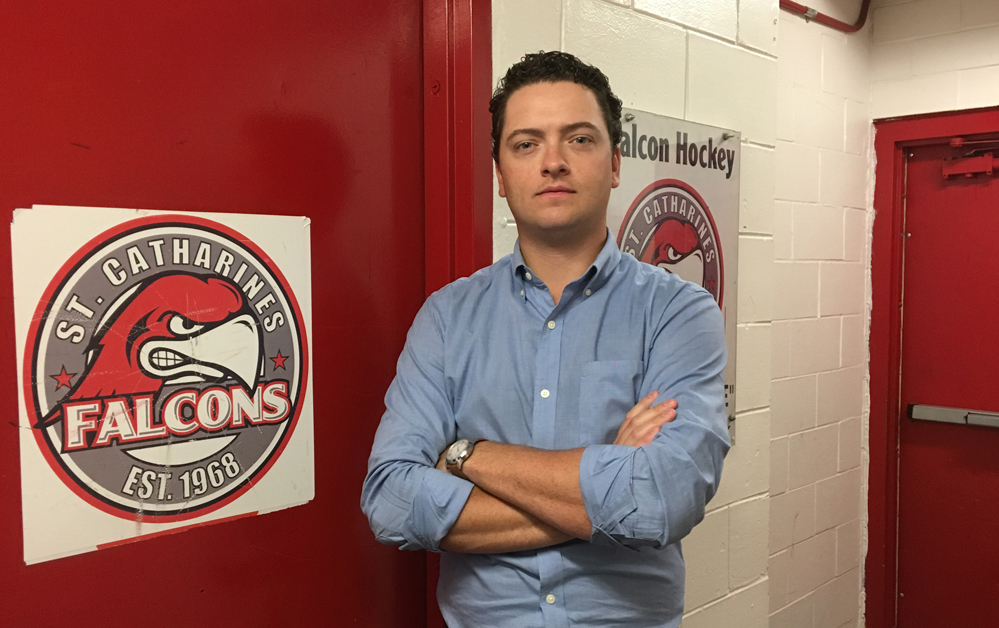 Dan the Man for the Falcons

Dan Fitzgerald is well aware how fortunate he is to be the new coach of the St. Catharines Falcons.

The 30-year-old Hamilton native wasn’t sure what his next move would be following his resignation as head coach in Cambridge. When the opportunity to coach the Falcons presented itself, he couldn’t say yes fast enough.

“I was thrilled. Coming out of an unfortunate situation in Cambridge, I wasn’t really sure what direction I was going to go,” Fitzgerald said. “Obviously, everyone knows the history behind everything here. It all worked perfectly and fit perfectly with who I am.

“What a blessing in disguise. Talk about trading up. I’m not taking this (opportunity) for granted.”

Fitzgerald,  the reigning Midwestern Conference coach of the year after leading the Winter Hawks to a 35-point improvement,  resigned in Cambridge after the organization left the Greater Ontario Junior Hockey League and applied for junior A status.

It was a messy situation and Fitzgerald felt it best to move on.

“Some things came out in the press I wasn’t aware of,” Fitzgerald explained. “Once I gave them to opportunity to explain what was going on, I made the decision to move on.”

The Falcons were in need of a new coach after parting ways with veteran Chris Johnstone, who guided the team to 40-7-0-3 record and a birth in the Golden Horseshoe finals, where the Falcons were defeated by Caledonia.

A meeting between Falcons general manager Frank Girhiny and Fitzgerald went very well and the two parties quickly realized there was a match.

“Dan is very intelligent and understands the game really well,” Girhiny said. “He has a strong presence and is very well prepared which should transform into an automatic buy-in from the players.

“I like that fact that he is a teacher by trade and understands today’s young athlete.”

Fitzgerald has a masters degree in education from Niagara University and a masters of business administration degree from McMaster University. He has taught high school English during summer school the past few years in Hamilton and has been a supply teacher with the Niagara Catholic District School Board.

Fitzgerald would seem to fit the bill as a New Age coach.

“I’m a very positive person,” he said. “I like to instil and build confidence. I don’t want to speak for any players I’ve coached before but I’d like to think they would tell you I keep my emotions in check and make sure we’re getting the best out of these kids.

“It’s not about screaming and yelling to try and motivate the kids anymore. You need to know them. I want to spend as much time as I can to get to know them as people so I can motivate them.”

Fitzgerald also prides himself in being a hard worker who is detail orientated.

“No one is going to be more prepared than this staff, that’s for sure,” he said. “The why and the how are huge parts. In communicating those things to 23 young men, it’s important for them to know exactly why and how we are going to do things. There is a reason and purpose behind everything we do.”

Fitzgerald also made it clear he intends to be hands on when it comes to discipline.

“If I’m sitting a player, it’s not just sit on the bench and I’m not going to talk to you,” he said. “I’m going to explain why and this is why you had to sit. If you communicate those things, the level of respect is higher and they can get over it a lot quicker and move on.

“It’s about getting the most out of people.”

Fitzgerald, who will be joined by returning assistant coaches Scott Sweitzer and Andrew Kilcar, believes winning and development can go hand in hand.

“Winners win. That’s part of their development. We also spend a lot of time in practice on skill development. We’re always working better as individuals because if we do that, we’re going to support the team better. The development of becoming a winner is huge for these kids.”

The Falcons opened the season splitting a pair of games at the annual Showcase Tournament in Brantford.

“We’re really excited about the crop coming in and we have a great core coming back and we’ve built around that,” Fitzgerald said. “We’re in a really good position right now.

“I think I can come in here and I can continue the tradition and we can be a championship team here again.”