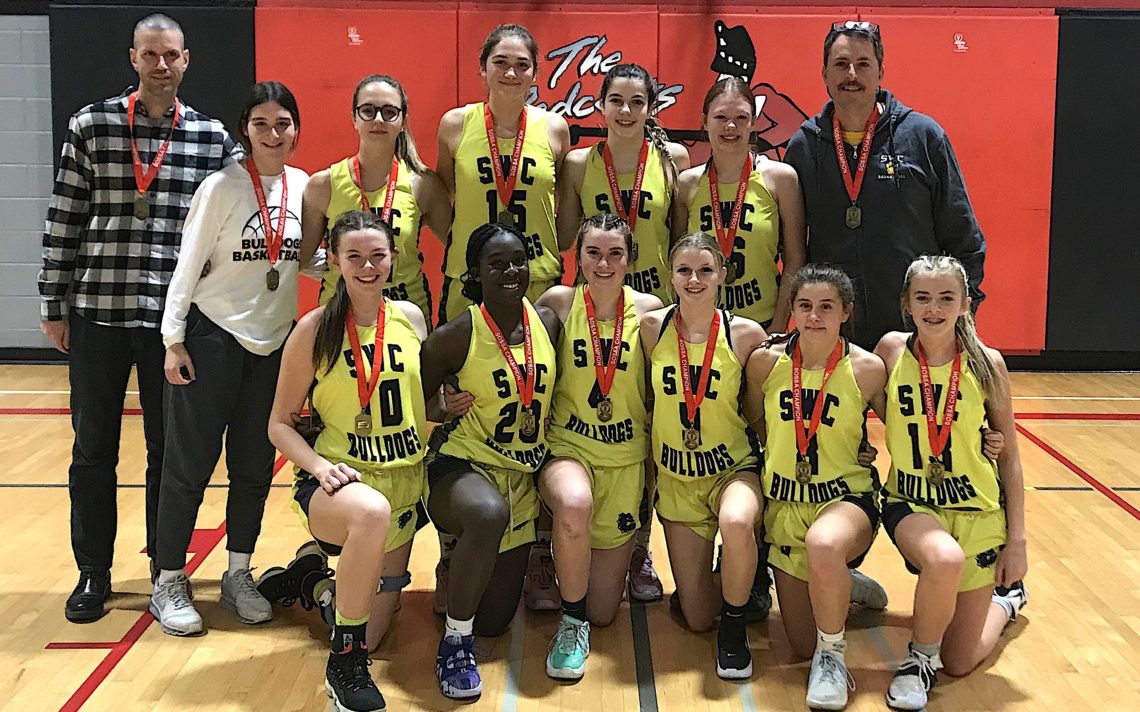 Megan Barker returned for her 12B year at Sir Winston Churchill for one reason.

“I came back this year to have another great memory with the same girls,” the 18-year-old said Thursday, after helping the Bulldogs senior girls basketball team record a 70-31 victory over the Saint Paul Patriots in the Southern Ontario Secondary Schools Association AA championship game at Governor Simcoe.

“I always wanted to come back and I was debating all summer whether to go to Brock or come back to Sir Winston but it is a memory that I didn’t want to miss because COVID took away so much. I wanted one more year to play with all the girls I played with forever and Frank (head coach Keltos) has coached me forever. And I got to play with my little sister this year. She is in Grade 10 and got called up.”

The season has been everything the six footer wanted.

“It has been everything and more. I couldn’t be more grateful for how the season worked out. On top of everything, we have learned how to play as a team and communicate without even talking on the court,” she said. “That shows in our success this season.”

Keltos loves having her on his squad.

“Megan is great,” he said. “She voices her opinion, she is awesome and she is going to defend every kid on the team. She is kind of like the coach on the floor and is a great leader and a great kid. Sometimes she gets taken the wrong way, but her heart is all about the team. She just wants to win.”

Keltos feels she has a future in basketball at the next level.

“Her basketball IQ and talent are good enough for post secondary. I am not 100 per cent sure of what she wants to do but she can play. Someone is going to steal her.”

Barker is looking forward to the Ontario Federation of School Athletic Associations championships.

“I feel we can do it with the dedication and the mentality we have on our team. We have a very good chance of getting far in OFSAA,” she said. “Every single girl is so passionate  and works so hard that it will be a breeze once we get there.”

Barker is planning to study concurrent education at Brock or Queen’s and isn’t sure what comes next in her basketball career.

“It is a dream of mine but I might just be going for school and intramurals. Basketball is always going to have a place in my heart.”

There is still some work to be done in her high school career.

“Going into the playoffs, we had three steps. Step one was zone finals, step two was winning SOSSA and our third step is to medal at OFSAA,” Keltos said. “Right now we are playing really well and mission accomplished, for sure.”

Just like they did in the BPSN Girls Basketball Tournament, the Patriots hung tough with the Bulldogs for a decent stretch of the game. They trailed 17-11 after one quarter and 38-25 at the half.

“We run out of steam,” Saint Paul head coach Kristin McDonald said. “We have a talented team and we can keep up with them for a good chunk of the game which is amazing. It gives us good energy but by the second half we kind of fall flat a little bit.”

This year, Saint Paul had the misfortune of having to make it past Churchill to get to OFSAA. The Bulldogs should be among the top seeds at the provincial championship.

“That is not exactly ideal but I am glad that we played well and I am glad we hung tough with them for a good part of the game,” McDonald said. “I am proud of the grit that our girls showed. I will take the first half as a win for us and I wish them all the best at OFSAA.”

The Patriots will lose three players to graduation, most notably Brooke Lennox, who led her team with 15 points in the final.

“She is our captain and that is going to be a tough loss.”

“They have some kids who can make shots but we have nine girls who we can roll in and they weren’t going to be able to last for four quarters,” he said. “We kept on rotating in girls and making sure we had the proper lineups for size and speed.”

It proved too much for the Patriots.

“They stuck around until half and then they got a bit tired in the third quarter. We hit shots, defended and rebounded and once that happened, we broke them down a little bit,” Keltos said.

Up next: Churchill advances to the OFSAA AA championships Nov. 24-26 in Stratford.

Ava Stranges scored 22 points to lead Saint Paul to a 48-34 victory over the E.L. Crossley Cyclone in SOSSA semifinal action.