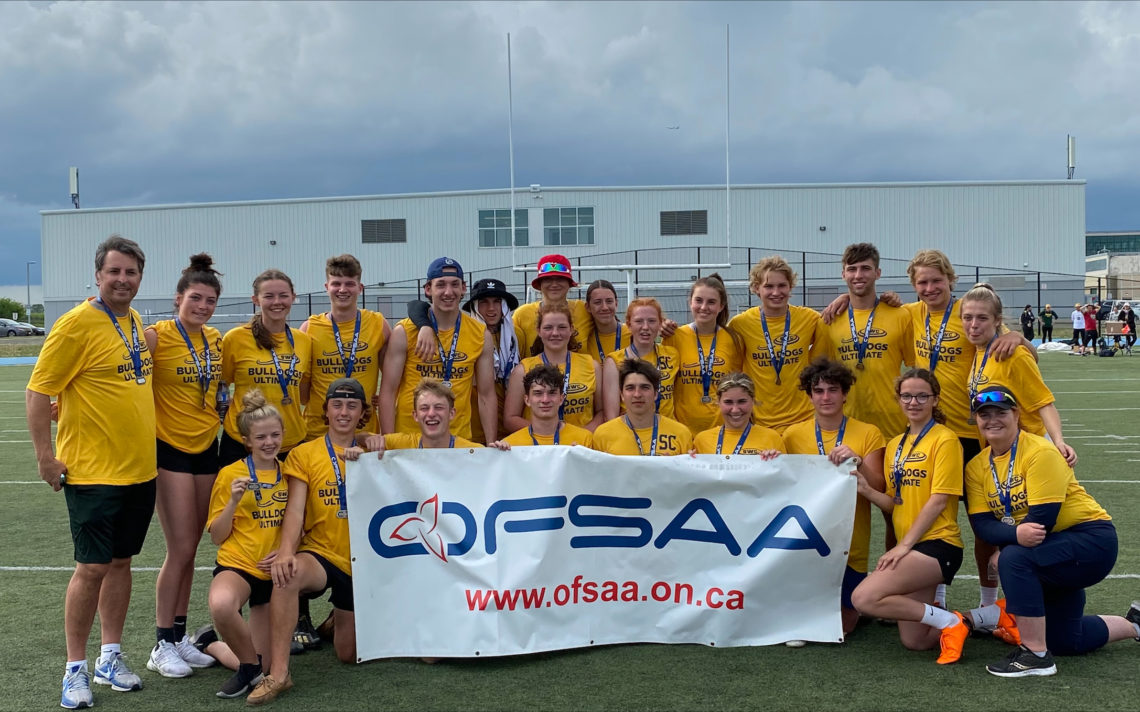 Sir Winston Churchill’s ultimate team’s 28-game unbeaten streak came to an end with a 14-8 loss to Adam Scott in the gold medal game of the Ontario Federation of School Athletic Association’s ultimate festival in North York.

“This school from Peterborough has a strong club ultimate program in their area and their knowledge of the game and their excellent skills were just too much for the sheer athleticism that we relied on to overpower our opponents,” said Frank Keltos, who coached the Churchill team along with Tammy Short. “They (Churchill team members) are a special group and represented themselves and our school with pride.”

The Bulldogs beat Loyola 13-7 in quarter-finals and Bowmanville 8-6 in the semifinals. Churchill went 3-0 in its pool, defeating HaverCrest 9-8, St. Joan of Arc 7-6 and Humberview 9-8. All three round-robin games went in extra time.

“By pure luck of the coin toss, we had the last possession with the wind and we were always able to score the last points,” Keltos said of the round-robin games.

The squad, which beat Port Colborne in the Southern Ontario Secondary Schools Association final, was loaded with talent.

“The team was made up probably 25 of our best athletes in the school, girls and guys,” Keltos said. “They all liked each other and trusted each other and they were having fun with it. It was a sport that they really hadn’t played before.”

Athleticism was the key to the Bulldogs’ success.

“If you have good athletes and you have size and speed, the game is all about speed, jumping and agility. You need a couple good handlers who can throw the disc and if you have that, you are a pretty good team,” he said.

Churchill fielded an ultimate team the season before COVID closed down spring sports for two years and ended up losing in the SOSSA semifinals.

“We were OK successful and it was like ‘What is this sport?’ We only had two people returning from that team but the players we had are really competitive people and they wanted to excel at it. We just learned though practise.”

The team is already looking forward to the 2023 season.

“The kids haven’t stopped throwing at lunch and the Frisbees are out,” Keltos said. “The kids are continuing to play and we are talking about doing a fall intramural league just to kind of figure out who else in the school is good and let them try it in intramurals. That will make it a lot easier down the road when we are selecting a team in the spring.”