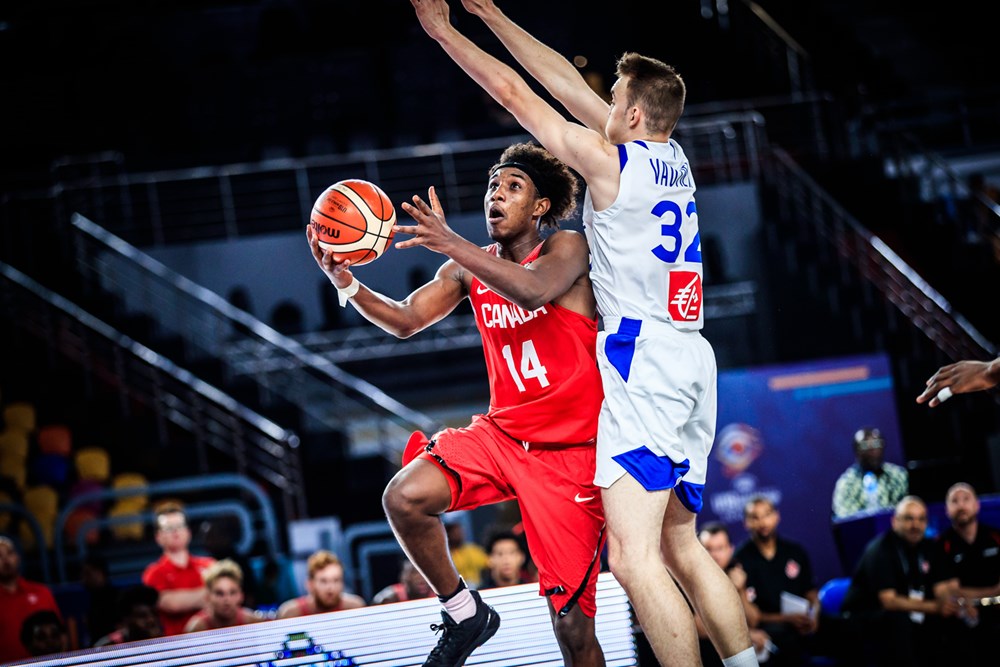 This is Day 6 of BPSN’s 12 Days of Christmas, a look back at some of our favourite stories from 2017. We hope you enjoy revisiting some of our top stories since our inception in September.

Abu Kigab is shown in action at the FIBA under-19 world championships. Photos by FIBA

With countless Canadians starring in the NBA and March Madness brimming with Canadian content, it may well be the golden age of Canadian basketball.
Despite the individual successes, no Canadian team of any age or gender had won a world championship until the Canadian under-19 men’s team defeated Italy 79-60 in early July to capture a FIBA gold medal.

“It was an unbelievable thrill and I am still taking it in,” said Team Canada member Abu Kigab. “It was crazy.”

“What stood out was his contagious energy and ultra-competitiveness,” he said. “He was very raw but extremely receptive to instruction and was one of the hardest-working kids we had seen at St. Francis.”

That ultra-competitive nature helped Canada shock the United States 99-87 in the semifinals of the FIBA under-19 tournament.

“It was an amazing moment,” Kigab said. “I had that game on my list since last year when they beat us in the finals of the FIBA Americas. Going into the game, I was playing with an edge. I didn’t have the greatest game but when your shot isn’t falling, you have to do other things to help your team by rebounding and defending. Beating them felt really good because they were the reigning champions.”

The 6-foot-7, 215-pound small forward and the rest of his Canuck teammates had little problem forgetting the monumental victory and getting ready for the championship game versus the Italians.

“We took it one game at a time and we didn’t look too far ahead,” said Kigab, who came to Canada from Sudan when he was nine. “Once you start looking at your next opponent and don’t focus on what’s in front of you, that’s when great teams lose. We did a great job of staying in the moment and that helped us get the win against Italy.”

When the last whistle sounded in Cairo, Egypt, Kigab and his Canadian cohorts were listening to the O Canada being played.

“It was an amazing feeling hearing the national anthem played in Egypt,” he said. “I grew up in Sudan but I also spent a lot of time in Egypt. It was a real thrill. I was singing along and it’s so hard to find words to describe it. I took it for what it was and I’m very happy that we got the W and the gold.”

Those experiences paid major dividends at this year’s world championships.
“You have an incredible edge over a lot of guys,” KIgab said. “You know what you’re doing, you already know the rules and you are comfortable with the way they are calling the game. We had a lot experience on the team but we also had a lot of inexperienced guys who were in their first year. I was staying positive with my teammates and letting them know what to do in certain situations. Everything comes from experience.”

But experience means little if you don’t have the talent and skills to back it up.

“Abu’s versatility as a player is what makes him so special,” Sullivan said. “He is able to play and guard nearly all the positions on the floor. He is an exceptional team defender and rebounder.”

“It enables him to effect the game at all times.”

“Abu’s biggest transformation since leaving has been with regards to his body,” Sullivan said. “He has been able to improve his strength which has enabled him to improve his explosiveness.”

Playing at Prolific Prep and with the Canadian program against the best players in the world, Kigab has become a much better decision maker at both ends of the floor.
“His skills, of course, have become more refined as a result of his training opportunities and his commitment,” Sullivan said.
Kigab will now be taking his sublime skills to Oregon, an NCAA Division 1 powerhouse which lost 77-76 to North Carolina in the 2016 Final Four. After the worlds, he spent a few weeks at home in St. Catharines recuperating from a bone bruise in his wrist before heading to Oregon to prepare for his freshman season. When he was home, he worked out in Hamilton with trainer Divya Rao of Blood, Sweat and Tears Basketball.

“He is a great guy and he has an unique way of teaching,” Kigab said. “I really love him.”

At Oregon, he will compete for playing time against six returning players, two transfers, a five-star recruit as rated by ESPN, and two other freshman that share Kigab’s ESPN four-star rating.

“I want to go in there and be a leader, play my game and I’m not going to be shy about what I do,” Kigab said. “I know what I am capable of and I just have to go there and stay focused, stay humble and work hard. That’s what has got me to this point and I am going to keep doing that until I get to the next level.”

Former coach Sullivan has seen Kigab carve out playing time for himself regardless of the competition and Kigab expects to continue that modus operandi at Oregon.
“My confidence comes from preparation and practice and that’s the same for anything in life. I trained so much that I have so much confidence in my ability. Everything I am doing on the court I have already practised. I just go out there and let my game speak.”

Away from the court, he is planning to major in business.

“I take a lot of pride in academics. My mom always told me you can just be an athlete and a student. It’s called a student/athlete and the student comes first. If you don’t take care of your school work, you won’t even be able to play in college.

“I’m going to stay focused and grounded and I am going to grind it out. I have a routine set up already. When I get there, I will be good to go.”
His time spent playing prep basketball at Prolific Prep has prepared him well for university basketball.

“They let our team play against the best competition in the world,” Kigab said. “In my opinion, we had the toughest schedule. And they also prepared me from an academic standpoint.”

While at Prolific Prep, he attended Justin-Sienna Catholic high school.

“They were really focused on academics and you couldn’t have any slipping. I was really appreciative of the people at Prolific Prep for helping me out with everything.”
Kigab knows he isn’t a finished product and he’ll continue to work hard on his game.

“I have to continue developing my jump shot and get better at shooting the three,” he said. “I didn’t shoot it as well as I wanted to at FIBA but It has come a long way. It keeps getting better every single day. It’s a matter of time and reps and I will be there soon.”

He also needs to continue working on his decision making.

“I can make tough shots and I have the confidence to make them but I also know that I will have four great teammates around me. Instead of taking what is a good shot for me, I can get my teammates a great shot.”