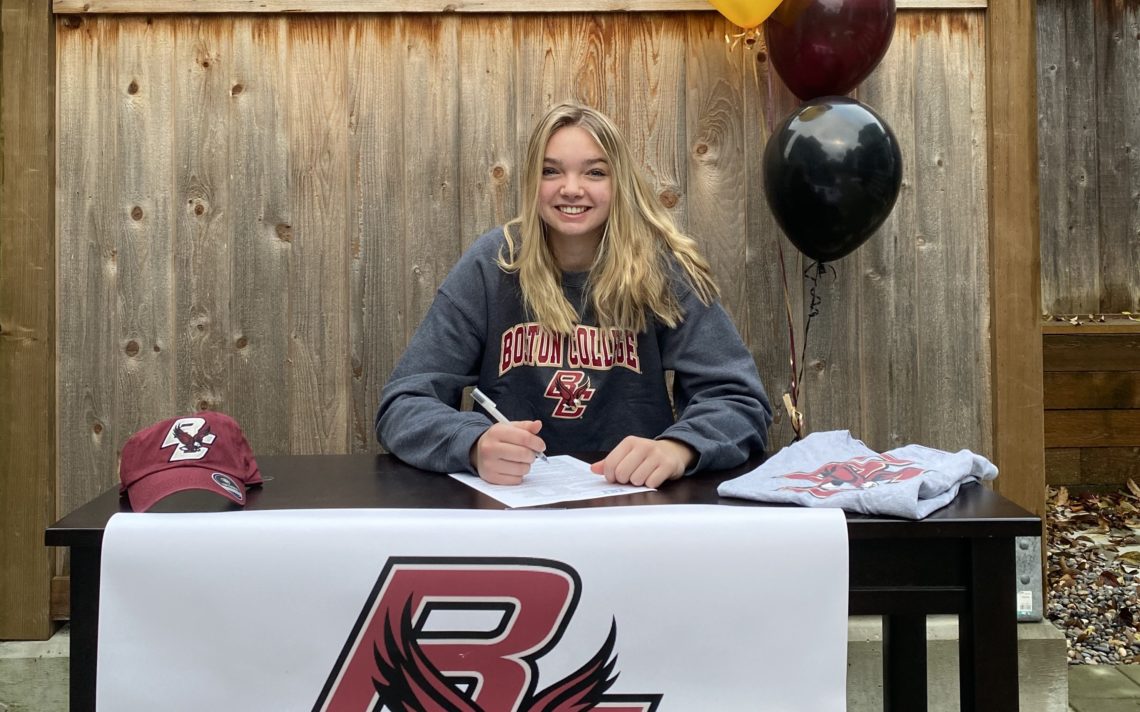 Jenna Pollock’s signing ceremony with Boston College wasn’t quite what she expected.

The Grade 12 student at Sir Winston Churchill was in Richmond , B.C., from September until December, training with Volleyball Canada’s National Excellence Program. She ended up signing her national letter of intent on Nov. 11.

“It had a different feel and because B.C. is in a different time zone than Boston, I was just trying to get it done in the morning as early as possible,” the 17-year-old St. Catharines native said.

Pollock and roommate Emoni Bush, a University of Washington signee, were staying with the same billets and decided to work together on a signing ceremony.

“Her mom came down and we set up a thing in our homestays’ yard at 7:30 in the morning,” she said.

Pollock went first with her Boston College swag and maroon and gold balloons and then Bush followed with Washington gear and purple and white balloons. 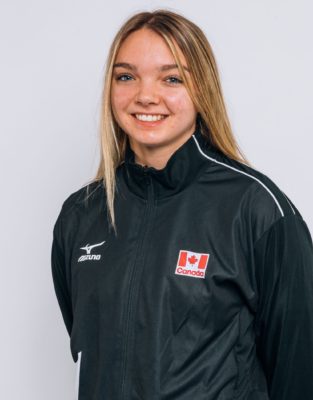 “We definitely had a lot of balloons in our bedroom the night before,” Pollock said, with a laugh.

It was an emotional moment for the former Niagara Rapid and current Defensa travel volleyball player.

“Verbally committing was ‘Omigod, I finally found the place I am going to go’ but actually signing made it feel real. It made it seem so much closer. Choosing a university has been part of my life for pretty much all of high school and actually signing in senior year was kind of a shock.”

The recruiting process for Pollock started the summer she was going into Grade 9.

“I was looking at a lot of different schools and Boston College wasn’t really on my radar. I wasn’t talking to them until December of 2019.”

“When I went to the campus in January, I was ready to make the decision. I was getting to be done with the recruiting process and I really felt at home at Boston,” she said. “The coaches were amazing and I had an immediate connection with the girls and the place. They were telling me about the freshmen coming in and I was really excited. It seemed like we were going to be really good and I wanted to be a part of it.”

The school’s academic reputation also played a role in her choice.

“That was a high priority for me and it being a high academic school kind of sold it for me.”

She verbally committed to the school at the end of February. Pollock also made an official visit to Auburn and did unofficial visits to Penn State, Pitt and Buffalo.

The 6-foot-2 player, who is planning to major in business with a possible focus on marketing, has high expectations for her rookie season.

“For my freshman year, I want to be one of the best freshmen there and I want to try and make the All-American team roster at the end of the year,” she said. “Freshmen get on there sometimes and it’s one my goals. I want to be the best I can be there and get the most out of it.”

She is looking forward to the entire experience when she hopefully arrives there — vaccines willing — at the end of July.

“I’m really excited to get out there to train and be around a whole bunch of girls who value volleyball as much as I do. We are all kind of in the same boat competing for our college and trying to win. That whole aspect is exciting for me.”

“Jenna and Nikki bring some needed fire power and versatility into our lineup,” said Boston College head coach Jason Kennedy, on the university sports website. “They each have the ability to hit across all three front row positions and gives us a good amount of options for 2021 and beyond.”

“Jenna is one of Canada’s top junior players and has some high level international experience,” he said. “Primarily training as a middle, she’s equally effective on the left side and brings a physicality into the gym that we will immediately benefit from. Jenna has Olympic aspirations and we’re looking forward to helping her reach those goals over the next four years.”

Pollock was an alternate with Canada’s under-18 national team in 2017 before being selected for the team in 2018. She played for Canada at the world championships in 2019 in Egypt.

As a member of the under-20 team in 2020, the COVID 19 pandemic cancelled on-court play but Pollock was involved in virtual training. There were talks from senior national team members and coaches to help with the mental aspect of the game. 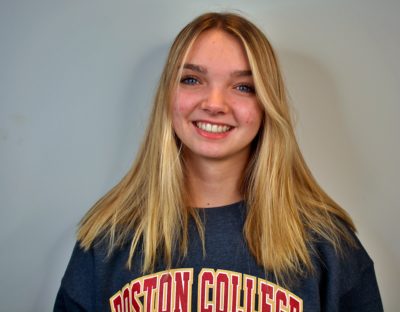 She agreed it was tough missing a spring and summer of development.

“I definitely had a moment of what do I do now but I got lucky to get to go to British Columbia to play for the last four months.”

She described her experiences at Volleyball Canada’s National Excellence Program as a lot of fun.

“We got to train under Shannon Winzer who is now the head coach for Canada. It was great to be coached by her and be around the top 16 athletes in the country.”

Training with such high-calibre talent paid big dividends for the 6-2 Pollock.

“As a middle blocker, getting different setters to read against helped and having different levels of hitters swinging at you from the outside, you had to be quick and have agility. I definitely got much better at that and learned from all the players from the different provinces, even though a lot of the girls were from my team.”

Pollock returned to St. Catharines Dec. 19 and attended two practices with Defensa before the lockdown hit in Ontario.

“Hopefully we will have some more practises if lockdown gets lifted. We are waiting it out and seeing what happens.”