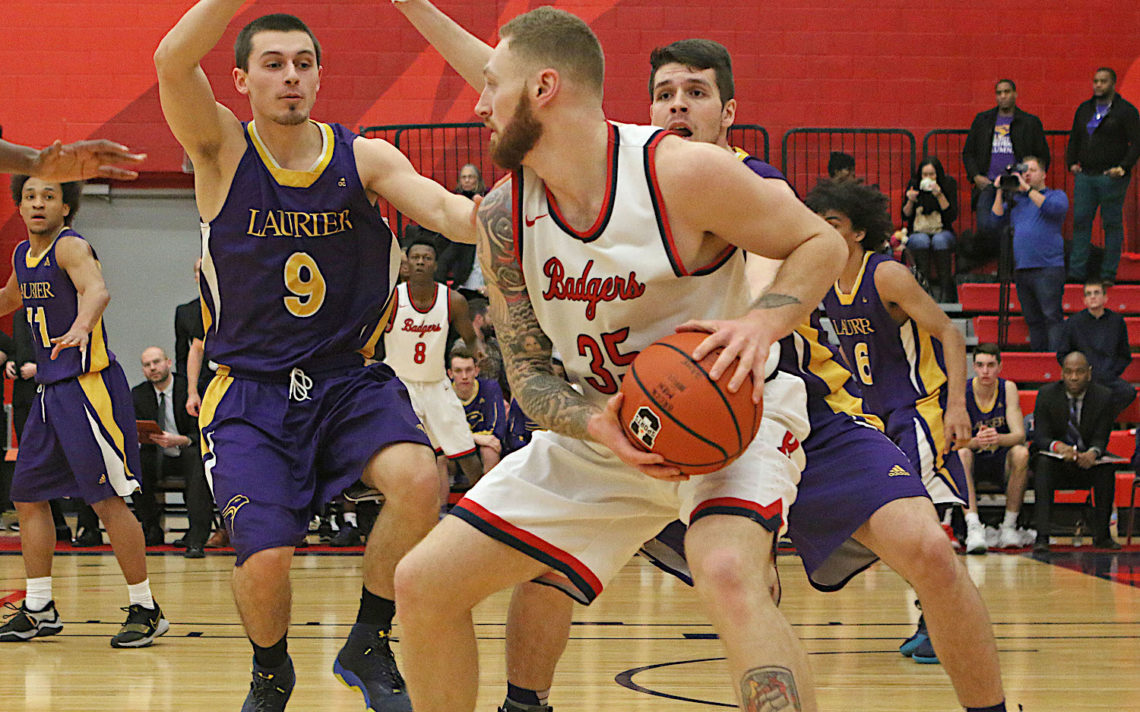 The Brock Badgers men’s basketball team picked up right where they left off in the regular season.

After setting a school record with an outstanding 21-3 mark, the Badgers began their quest for a national championship Saturday night and wasted little time setting the tone.

The Badgers raced out to a 27-6 lead after one quarter and built their lead to 53-14 at the half en route to a 91-73 triumph over the Wilfrid Laurier Golden Hawks in an Ontario University Athletics quarter-final playoff game at Brock.

Brock will now host Ryerson in a Wilson Cup semifinal game at 7:30 p.m. Wednesday with a trip to the USports National Championships on the line.

In addition to advancing to the OUA championship game set for Saturday, March 3, both semifinal winners are assured spots at the Nationals in Halifax.

Kissi is thrilled to be in a position where one more win gets his team to the dance.

“We’ve worked for five years to put ourselves in this position. Now we have a chance,” he said. “This is for a trip to the national championship and our guys know that, so we have to be as sharp as we were in the first half tonight.”

Brock guard Johneil Simpson said the Badgers made sure not to take the Golden Hawks lighty since a loss would have ended their season.

“We won a lot of games during the year but it’s a new season,”  Simpson said. “One game and you can go home so you have to treat it like that and treat every game like it’s a championship and come out with that approach.”

Johneil’s early shooting prowess helped built Brock’s lead. The fourth-year guard poured in 21 points overall, including 16 in the first half.

“It’s a big confidence boost, especially in a playoff game like this,” he said of the early success. “Any lead you can build early on, you can breath a little bit, especially in an environment like that. We had a lot of fans come out today and getting a lead like that to start the game allows us to play easier down the stretch.”

“It doesn’t always go in but when the shots are falling it’s definitely a good feeling,” Simpson said. “My teammates did a good job executing and getting me my looks and I did a good job having my feet down and being ready to shoot.

“It was one of those games and they fell.”

Kissi said the early lead was exactly what the Badgers needed.

“Our whole focus was to get out and try and get up,” he said. “We switched some things up and it worked really well.”

“The focus is to limit and not let their best players get going,” he said. “The idea was to get them out early and try to get up. I know we can score so it’s about stopping their guys and scoring.”

Simpson feels the Badgers need to be ready for the Rams.

“They’re a good team. I feel we match up against them pretty well but it’s obviously a chance to go to Halifax so they’re going to come and give us everything so we have to prepare for that,” he said.

Kissi’s availability for Wednesday is in doubt after he was suspended for one game and Brock fined $1,000 as a result of an Ontario Athletic Disciplinary Committee decision.

The suspension was as a result of an incident during a Feb. 17 regular season game against Windsor. Kissi was ejected from the game following a foul called against Dani Egaldi.

Brock Sports appealed the decision which permitted Kissi to coach Saturday. There is no timetable for when the appeal may be heard.

Up next: The Badgers host Ryerson in a semifinal game Wednesday at 7:30 p.m.