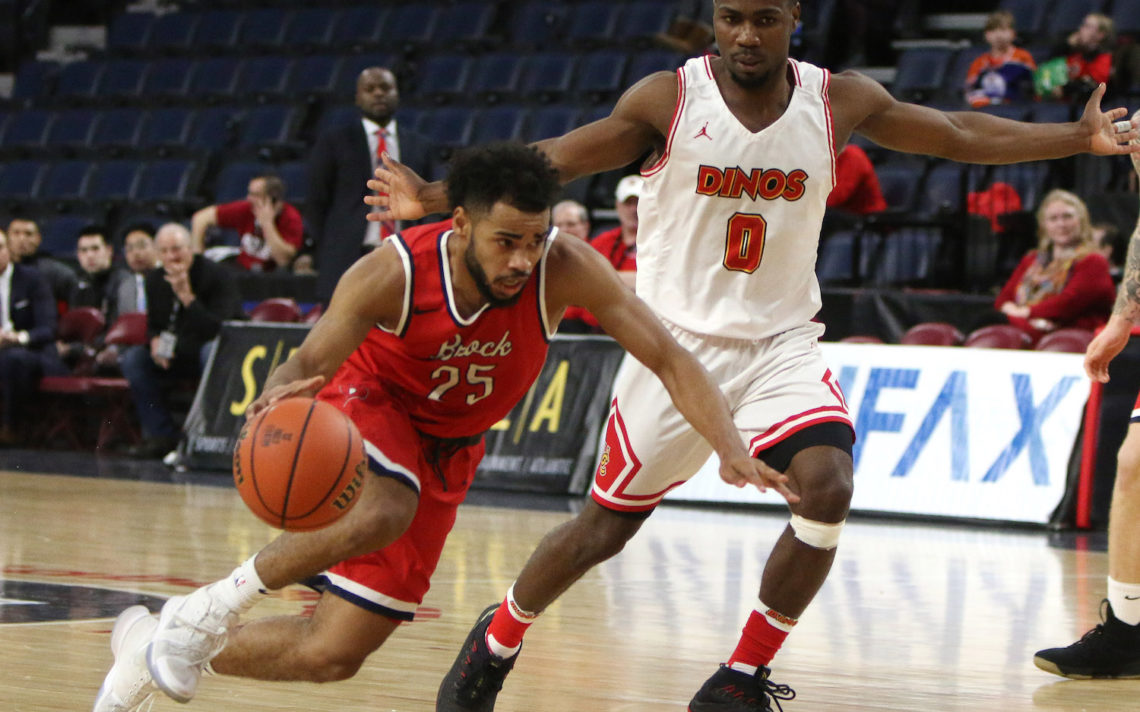 Badgers open with loss to Dinos

Tyler Brown drives to the rim as Brock played the University of Calgary in the opening game of the USports men’s basketball championships in Halifax. Photo special to BPSN by DAN DAKIN.

The Brock men’s basketball team fought back Thursday to take a fourth-quarter lead before falling 78-76 to the University Calgary Dinos in both teams’ opening game of the USports national men’s basketball championships.

“It’s definitely not the result we wanted, but we left it all on the floor and I think we still made the people back at Brock and those that made the trip pretty happy,” said Johneil Simpson, who led Brock with 24 points and 12 rebounds. “I guess that is all that you can ask for.”

Brock head coach Charles Kissi saw his team get off to a slow start, but he was happy with its effort.

“They made some plays and we made some mistakes and that’s the game,” he said. “We got it down to a few possessions and gave ourselves a chance.”

Brock trailed 38-24 in the second quarter, but never gave up.

“We had a game plan and we stuck to it and we found a way to chip away and get back into the game,” Simpson said. “We just didn’t have enough at the end.”

He didn’t feel fatigue played a factor at the conclusion of the game.

“They just made some tough shots down the stretch and a couple of plays,” Simpson said. “They’re a good team, they’re a good program, they are well coached and they were a little bit better today.”

Simpson had one of his best games of the season.

“Any time you can play on the national stage, it’s a great opportunity,” he said. “The team did a pretty good job of getting me the ball.”

Kissi was impressed with Simpson’s performance.

“He left it all on the floor and I can’t fault him for that,” he said. “He gave everything.”

The statistics for the game were pretty even except for points off of turnovers. Calgary outscored Brock 22-8 in that area.

“We had a lot of bad ones today and that’s something that we couldn’t afford, but again that is part of the deal,” Kissi said. “They just happen sometimes, I guess.”

Missing from Brock’s lineup because of injury was rookie guard Kascius Small-Martin, a member of the Ontario University Athletics all-rookie squad.

“That was a difference but we had enough pieces to still get it done today,” Kissi said.

Brock has the day off before competing in consolation semifinal action Saturday.

“We still have business to take care of. It’s a business trip,” Simpson said. “We have to focus on who we have ahead of us and finish the trip strong.”

“We have no choice now,” he said. “We have to work as hard as we can and give everything we’ve got on Saturday.”