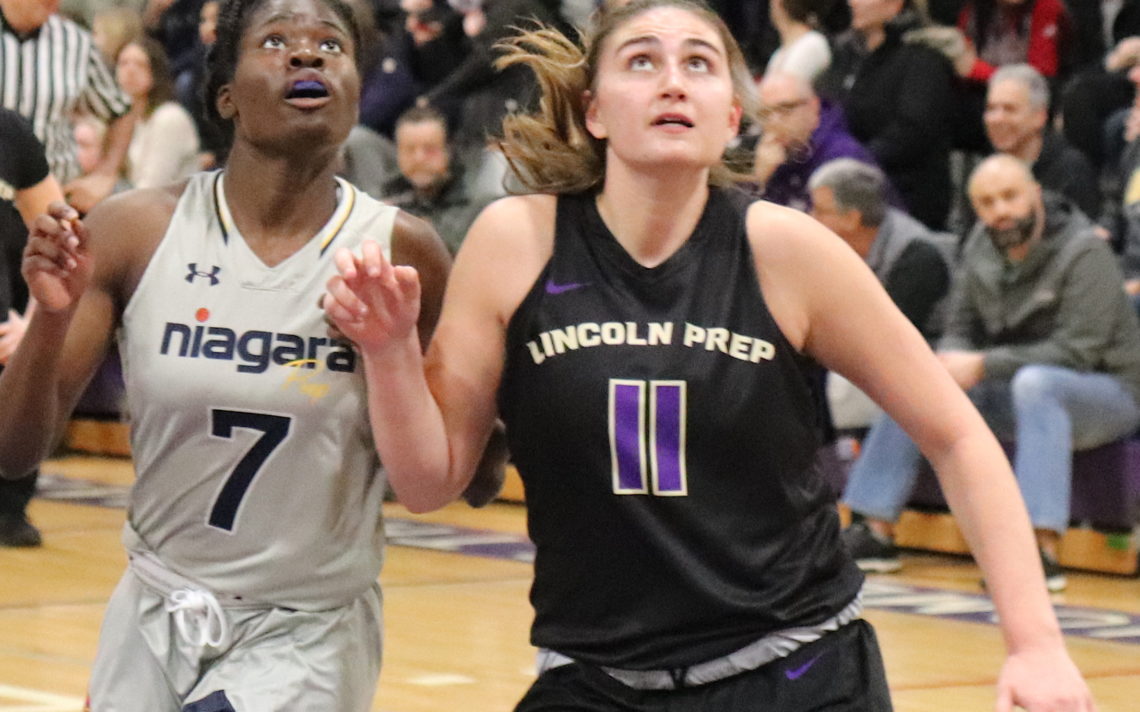 The 17-year-old Welland native joined the NCAA Division 1 Western Michigan Broncos women’s basketball team in late December and had to quarantine seven days before she could join the team. The seven days in a hotel in downtown Kalamazoo, Mich., added to the seven days she isolated herself in Welland before heading stateside.

“I’ve been watching TV, catching up with my friends and family and I’ve also been studying all their plays by watching film,” the 6-foot-2 forward said. “That will help me get a little bit ahead so that I am not going on the court with nothing.”

Food was delivered to her door by teammates returning from practice and she did manage to get to know them a little during quarantine.

“I’ve been able to kind of see them through the door and that kind of thing. It is odd but everyone seems super nice so far.”

She also has good first impressions about Kalamazoo.

“From what I saw in the drive from the airport to the hotel, it’s pretty nice,” she said, with a laugh. “It’s a nice small university town and the campus is a pretty decent size. It is beautiful from what I have seen and I think I will be OK with it all.”

Audino will be able to get to know her fellow Broncos a lot better now and that will start when she watches them play the visiting Bowling Green Falcons (7-1) Wednesday at 1 p.m. Western Michigan enters the game with an 1-4 record, including 0-3 in Mid-American Conference play. Last season, Western Michigan was 18-13 overall and 10-9 in MAC action.

Once the NCAA approves Audino’s high school transcripts, she will be eligible to practice and play for the team this season.

“For now, it’s getting into a groove, getting to know the girls and learning the plays so I will be ready to go.”

Audino’s agrees having to watch games and practices without being able to participate is killing her.

“It’s tough but I want to do everything properly and not get myself, my team or my coaches in trouble.”

Audino can’t wait to become a full-fledged member of the team this season.

“I am so excited because I haven’t played a game since March,” said the former member of Canada’s under-16 national team. “It is going to take some time getting back into things but I can’t wait for it.”

She is scheduled to start classes on Jan. 11 and she is majoring in bio medicine. Her first semester courses include biology, ethics and English.

She is excited about the whole experience, but especially the basketball.

“The team seems like such an awesome bunch of girls and I can wait to get on the court and finally play some basketball.”

Audino had planned to play and practice this season with Lincoln Prep in the Ontario Scholastic Basketball Association but the COVID-19 pandemic stuffed those plans.

“There’s nothing on in Ontario with the lockdown and coming here I have the opportunity to play basketball, train and get stronger,” said Audino, who started her travel basketball career with the Pelham Panthers. “It also gives me a little bit of an advantage compared to the other freshmen in my age. I will be a whole semester ahead of them and I will get to know the terminology on the court.”

Finishing her high school diploma in time to start with Western Michigan in January was a mad dash to the finish for Audino,  including completing a Grade 12 math course in 13 days. 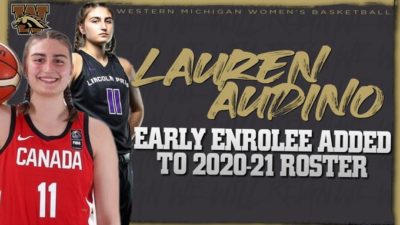 “That was a little hectic but I was able to balance out my time to get it done,” she said. “The two other courses I did on-line were easier ones as well as the in-class course I was able to finish.”

Audino admits she was a little concerned about going stateside during the COVID-19 pandemic but is confident Western Michigan is doing everything necessary to keep her safe.

“My family and I had concerns with the numbers in the States compared to Canada but we are getting tested six times a week and we get our results back in a matter of three hours,” she said. “It seems like they are handling things here really well.”

In November, Audino was one of four recruits announced by Western Michigan. Also signing with the school were Americans Maggie Stutelberg and DeAhna Richardson and Athens, Greece guard Artemis Kouki. Kouki played this season with the Greek national team in the D1 European Championship.

“Our staff is fired up about the 2021-22 recruiting class as it stands right now. We were able to get into the international talent pool and address specific needs,” head coach Shane Clipfell told the school’s athletic website. “This class adds plenty of length, versatility and great character to our program.”

Clipfell credited his assistant coaches for discovering the talent and selling the school’s program.

“This recruiting cycle was one like none other as we had to use creativity and ingenuity to discover many different ways to recruit,” he said. “I believe this class will prove to be well worth our efforts and will add enormous benefits to our campus, community and basketball program.”

Audino made unofficial visits to Harvard and Robert Morris before becoming convinced Western Michigan was her preferred hardwood destination.

Her arrival at Western Michigan is the latest step in her meteoric rise in basketball. She began playing basketball in Grade 7 and by the summer of Grade 9, she was a member of Team Ontario. In 2019, she represented Canada at the FIBA U16 Women’s Americas Championship in Aysen, Chile, and helped Canada win a silver medal by averaging 6.3 points and 5.8 rebounds a game.

“I reflect on that kind of thing when people ask me how long I have been playing basketball for,” she said. “I think back to my Pelham team, Welland and Lincoln Prep and how I progressed through everything and how it built me into the player I am today.

“It is amazing to think how far I have come but there is still a long way to go.”

She has set rim-high goals for herself.

“I want to play with this team, do really well and then I am hoping to make it to Canada’s Olympic team. That is always an end goal in my head and all the things I have done are hopefully bringing me towards that.”