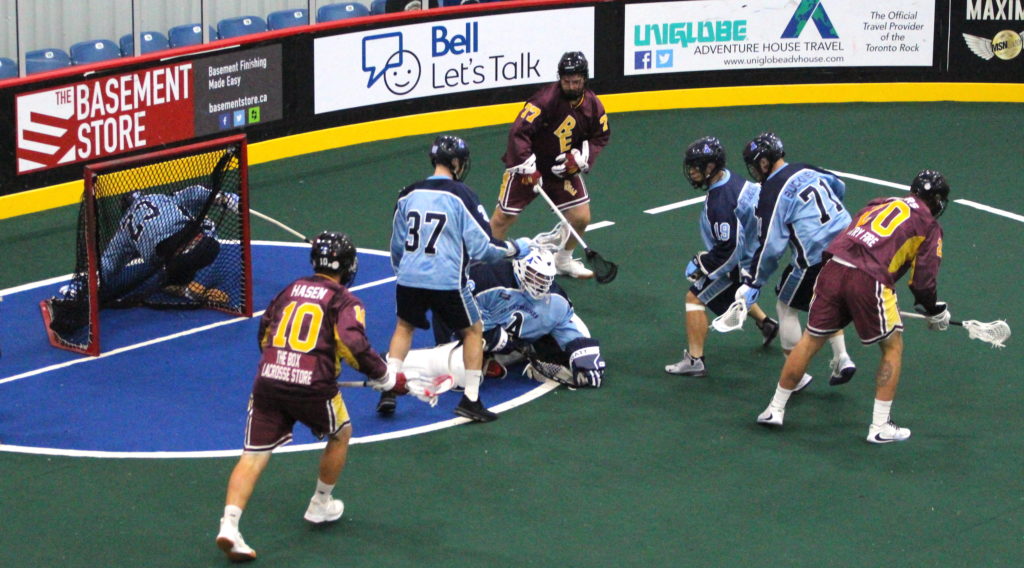 There are a lot of balls in the air for St. Catharines Athletics general manager Jeff Chcoski this week.

Chcoski is attempting to put together a roster for the A’s 2022 Ontario Lacrosse League season opener Wednesday versus the Peterborough Lakers at their new home at the Canada Games Park and Walker Sports and Abilities Centre.

Complicating the process is the fact no less than six players are still away at school while Mitchell Armstrong is with the St. Catharines Falcons as they make a run at a provincial junior B hockey championship. Toss in a transaction still in the process of being finalized and it’s no wonder Chcoski is wishing the season didn’t start quite so soon.

“This the earliest since I’ve been here that we’ve started,” he said. “We were always heavy with kids coming back from school so we always tried to delay our schedule if we could.

“It’s kind of got us scrambling a little bit as far as our roster goes and game day planning and sweaters. Will it all get done? Definitely. But it’s pinching us a little tighter . . . I would love to have an extra week-and-a-half.”

Chcoski said he will be utilizing the junior B roster to fill in the gaps and figures three or four will be in the lineup for the A’s Wednesday. The B’s are off to a 2-4 start.

“Having the ability to be involved with the junior B’s, there are a lot more moving pieces and cards involved than I’ve never dealt with before,” Chcoski said. “I’ve said from Day 1 this year it will be a work in progress to be able figure it out exactly because we’re going to be using a bunch of the junior B guys to start our season.”

When the full roster is intact, the A’s will rely on a nucleus of talent built around Keaton Zavitz, Ty Steenhuis, Gavin Howard, Jackson Webster and newcomer Kaelon Smith from Wallaceburg. Smith is a right-handed offensive player and grandson of former A’s general manager Jim Hopgood.

Toss in the likes of Armstrong, Issac Pantero, Cameron Pak and Julian Race to go with returning veterans Peyton McIntosh, Reid Lowe and Mike Wilson and goalies Austin Paddy and Oliver Vanyo, and the A’s have a solid core to work with as they re-tool after winning a provincial title last summer.

“We’re going to be younger this year just because of the run we had made last year to win an Ontario championship,” Chcoski said. “It’s the nature of the beast. We’re going to have to rely on some younger guys to get us through. We’re trying to add some age at the end here but there are still some hoops we have to jump through to add these three players for Wednesday night.”

The league will play a 20-game regular season with the top eight teams qualifying for the playoffs.

“We’re looking to finish anywhere between fourth and sixth place,” Chcoski said. “What we’ve done through our trades — we’ve traded a bunch of guys away —is we’re setting up for next year. Next year we have five first-round picks and two second-round picks in an 11-team draft.

“That’s where we are as an organization. We know we’re building to win in the next couple of years. This year is a bit of a re-tool, but by the same token, we always think we’ll be in it the whole time.”

Game time Wednesday is 8 p.m. with tickets available at the box office at Canada Games Park.