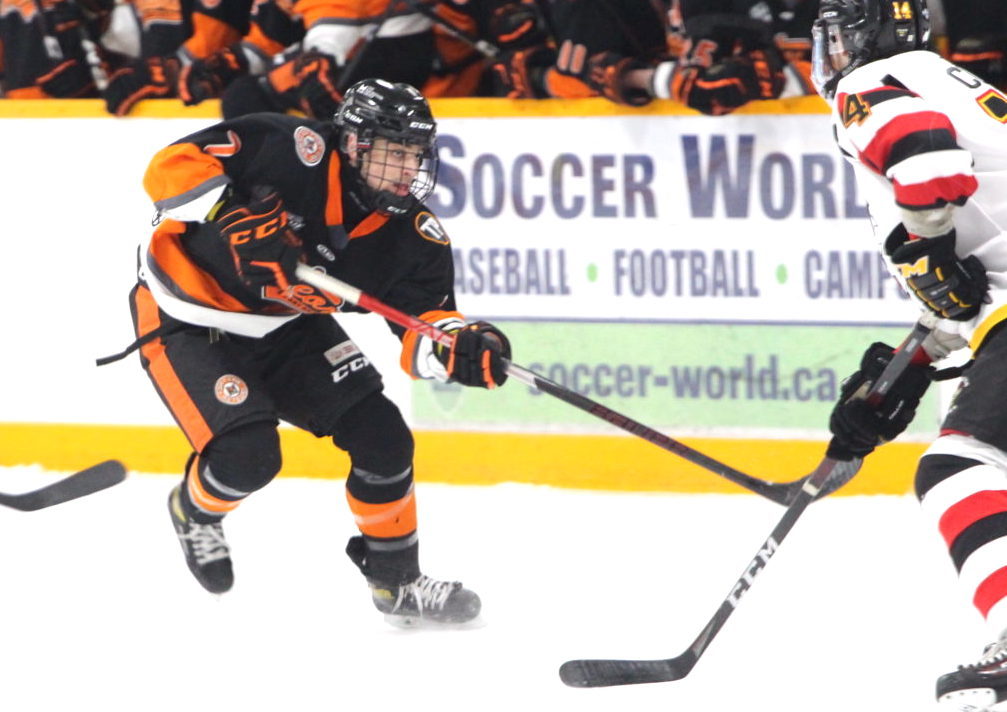 Kyle Adamo has added another element to his already strong and varied skill set.

The 18-year-old Fort Erie native has always been a strong 200-foot player and willing to mix it up, but this season has also begun to score at a more consistent rate.

“It’s more fun,” Adamo said when asked about his increased offensive output. “I have a lot of confidence right now and it’s a lot easier coming to the rink when you have confidence like that.” 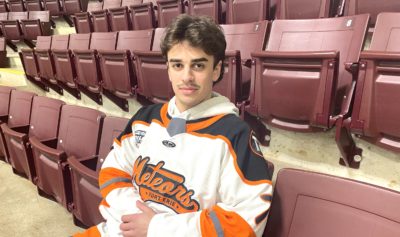 Adamo has been playing on a line recently with Sam Barrett and Dom DiFrancesco, a unit head coach/general manager Nik Passero threw together in the middle of a game a couple of weeks ago.

Passero makes no bones about Adamo’s value to the Meteors.

“The last seven games he’s definitely been our best player,” Passero said. “He’s our most reliable player. He works the hardest, he holds himself accountable and the puck’s going in the net.

“He can do it all. He plays wing, he plays centre, he’s good on face-offs. He lays the body so even when the puck’s not going in for him, there’s so many other things he brings to the table so it’s easy to play him.

“There’s always a job for No. 7 because he brings so much.”

Making Adamo’s offensive numbers even more remarkable is the fact he got off to a slow start with only one goal and one assist in his first 10 games.

“I’ve had slow start the last couple of years and then I get into the groove of it,” Adamo said. “Once I get my confidence  — it’s all about confidence with me — then I start playing a lot better.

“It’s frustrating at the start but now I’ve got it going.”

Passero said Adamo’s work ethic was still topnotch when the puck wasn’t going in the net.

Adamo’s increased production has come at an opportune time with Jayden Baldinelli out for an undetermined time after incurring a serious leg injury.

“Losing Jayden, I needed someone to step up and he’s at a point-and-a-half pace since Jayden has been gone,” Passero said.

Baldinelli, who had surgery on his leg, began rehab this week.

“He looks good and he’s in good spirits and on the road to recovery,” Passero said.

The Meteors, 15-6-3, are at Thorold Friday and home to Niagara Falls Saturday.

“There’s no question about it, never satisfied but definitely proud of our guys and our staff for where we’re at,” Passero said. “A lot of work goes into it on and off the ice.

“I think we’re a deep team and we’re looking to make some moves to get into the top two and make a run at it.”

Adamo is enjoying playing a prominent role on a team that has a legitimate chance to challenge for a championship.

“I was happy with last year. I thought we had a good season but this year’s been even better,” Adamo said. “With Baldinelli going out it was a little bit of a spill but we have a really good chance this year. We have a lot of depth and the team is tight. I’ve never been on a team where the lockeroom is that close. It’s perfect for us.”