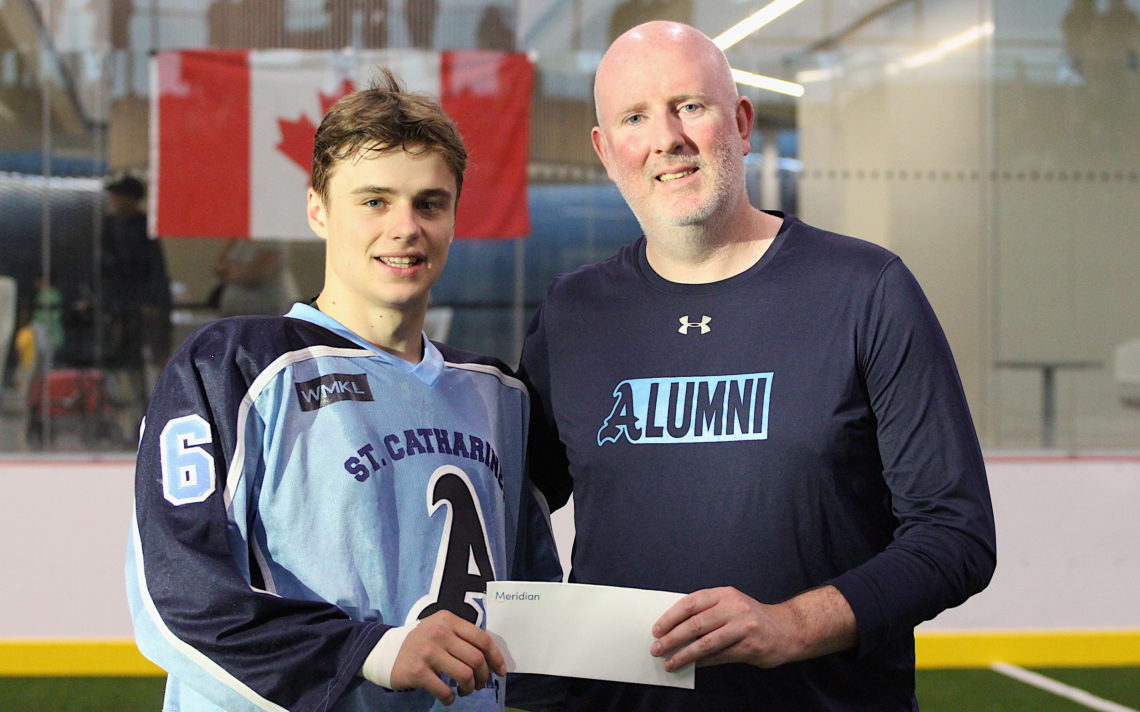 An unforgettable year got a little more memorable for Mitch Armstrong Wednesday night.

The 18-year-old St. Catharines native, still basking in the glow of a Sutherland Cup junior B hockey championship with the St. Catharines Falcons, added another feather to his cap when he was awarded the St. Catharines Double Blue Alumni Scholarship Award for a player entering his first year of post-secondary education.

Armstrong, a graduate of Sir Winston Churchill who will major in kinesiology at Brock, was taken aback when he was presented with the grant by Double Blue Alumni chair Corey Quinn before the Athletics dropped a tough 6-5 decision the Orangeville Northmen in Ontario Junior Lacrosse League action at Canada Games Park.

“We thought he had such a great year with the Falcons and represented St. Catharines so well and he’s going to Brock,” A’s general manager Jeff Chcoski said. “He still has three years to go in our program and we’re super excited just to have him.

“He’s truly a class kid who brings a lot to our team, not just inside the dressing room, but also in the community.”

The Double Blue Alumni is composed of graduates, executives and volunteers of the St. Catharines Athletics. Past recipients include Cody Ward, Carter Zavitz, Jacob Johnson and Tanner Vail.

Armstrong missed the A’s first several games while the Falcons went on their run but quickly transitioned to the floor.

“It was pretty easy, especially with the support of my teammates here and with the Falcons,” he said. “All these guys are my buddies — I grew up playing with them — so I knew even if I was rusty coming back they’d all support me and be there for me.

“I just love both games and knew I had to get back into it.”

Armstrong admitted his body felt it for the first few games with the A’s following a long, gruelling hockey season.

“It’s all different muscles from hockey. I was more beat up from the muscle soreness than the play. I had bumps and bruises and I hurt my shoulder in hockey. Once you get into the game your adrenaline is going and all that pain goes away and you’re having fun with all your brothers.”

Armstrong feels fortunate to be a part of two of the most iconic teams in St. Catharines sports.

“I love both. I speak highly of both organizations,” he said. “It’s two families. I’m grateful for the opportunity. Chicky (Chcoski) waited for me to finish the hockey season and was just so supportive. Tyler (Falcons coach Tyler Bielby) said he would be more than happy to wait for me to finish this out if our season continues (that long).”

Armstrong, who is a gritty, two-way forward with a penchant for coming up with big goals in key situations on the ice, earns his keep for the A’s as a defender.

“I’m pretty fast I’d say — I like to say I’m fast — I work really hard for that,” Armstrong said of his role. “Transition the ball and stay positive like I was on the Falcons. I’m always cheering us on and staying positive in the room and keeping everyone motivated and getting the boys going. I’ll always try and spark something.”

Armstrong is enjoying his first experience of junior lacrosse after the COVID pandemic wiped out the last two years of sport.

“I always looked forward to putting on the double blue one day,” he said. “I remember getting free tickets when you were a kid and I would look up to guys like Carter Zavitz and Latrell (Harris) and the work ethic they would put in and it inspired me to keep going.”

Chcoski has been impressed with Armstrong’s contributions.

“I’m just getting to know him as a person and as an athlete although I did follow him with the Falcons a little bit. I truly didn’t think he’d be this good this early and this energetic as a player,” he said.

The loss drops the A’s record to 9-10. They conclude the regular season Friday in Peterborough and will begin the playoffs next week versus Mimico, Toronto or Whitby.

A’s acorns: The air conditioning was not working at Canada Games Park for the game . . . The game was held up for a few minutes early in the first period due to a glare on the floor from the setting sun . . . Austin Paddy made 41 saves in goal for St. Catharines . . . Anyone interested in joining the Double Blue Alumni can send an e-mail to doublebluealumni@gmail.com.

Up next: The A’s conclude the regular season Friday in Peterborough. Playoffs 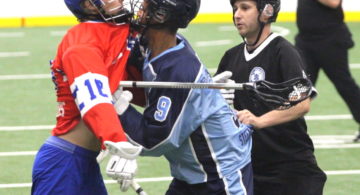 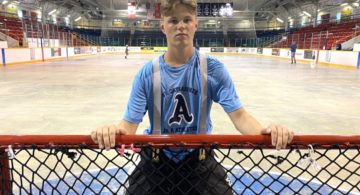