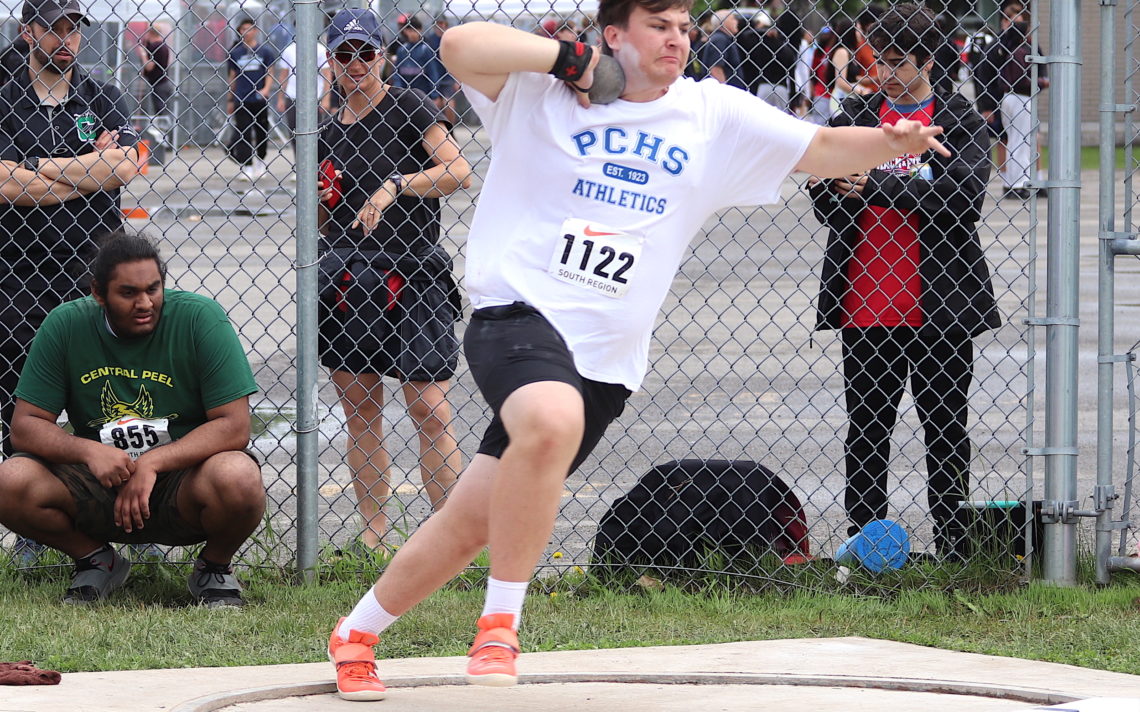 A winter of hard work is paying off in spades for Caleb Grover.

Last Friday at Welland Centennial, the Grade 11 student at Port Colborne High School captured the senior boys titles in discus and shot put at the South Regionals track and field meet. His winning throws of 14.21 metres in the shot put and 45.86 metres in the discus were both personal bests.

“This has been my first winter weight lifting and it has paid off a lot,” the 17-year-old said. “I brought a workout program from (three-time Canadian Olympian in discus) Jason Tunks so I was able to get the lifts that an Olympic thrower would do. It has been very beneficial.”

The Thorold Elite Track Club member has continued with his hard work in the spring.

“I’ve been going out with Dave (coach Adamek) and working a lot on the technical stuff. I changed some little things but they help a lot,” Grover said. “I have been throwing a lot in between these meets and trying to get as many reps in as I can.”

He had no specific expectations when the season began.

“I was going to come out and try and do my best. I know that I have put it a lot of work this winter in the weight room and I just wanted to compete.”

“I’d love to medal and that is my goal right now for Grade 11. I am going to continue to put in the work and get in the most throws that I can,” he said. “There is going to be some better competition because I am in the younger age group but If I keep doing what I am doing, I am hoping I can end up on the podium.”

It is the first step to his ultimate high school goal.

“I love the sport a lot and I would love to be an OFSAA (Ontario Federation of School Athletic Associations) champion by the end of my high school career. That is my main goal and I am always trying to continually beat myself and better myself.”

“He is definitely on the hunt for a medal in both discus and shot and to do so as a Grade 11 competing against older kids would be an even greater accomplishment,” he said. “Caleb is currently undefeated in every meet this high school season so it will be interesting to see what he can whip out when the pressure increases a little bit.”

Grover joined the Thorold Elite Track Club in Grade 9 and immediately fell in love with the sport of throwing.

“When I first went out for throwing, I knew it was definitely the sport I wanted to do and continue to do. It is not just about strength. It is probably the most technical sport I can think of and there’s so much that goes into it. It’s all the little things and all the little drills you have to do such as spins with a hockey stick on your shoulders. It all pays off.”

Shot put and discus are the perfect match for his 6-foot-3, 250-pound frame.

“It fits my build. I have a played a little bit of basketball too but this is the first sport where I feel that I am excelling at and I feel I can do my best at it.”

Fife believes Grover is benefiting from his early start in the sport.

“He is fortunate to have been able to start throwing discus a little earlier than most high school athletes and so he already had a great foundation, but he is getting better and better throws each week.”

Grover is also an important contributor to his team.

“Caleb is a really passionate thrower who has been an excellent leader, helping coaching his school team while also competing himself, and getting a number of his teammates involved in the club as well which we are really excited about,” Fife said. “There is something in the water in places like Port Colborne and Chippawa where some of Niagara’s top throwers are coming out of right now and Caleb is a great example of that.”