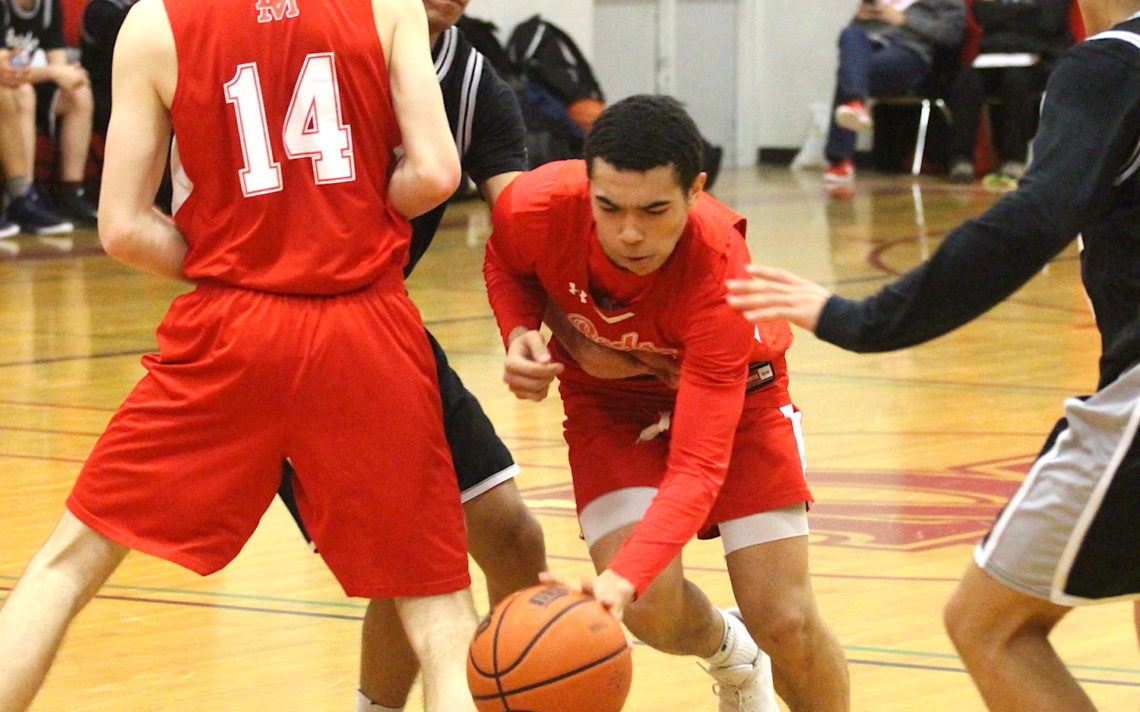 Mitch McArthur is getting to used to playing a role in Denis versus Goliath.

“It’s his third Catholic Classic and three years in a row he had to go up against St. Michael’s in the first round,” Denis Morris Reds coach Randy Conlon said.

“Every year, we know we’re coming in and playing St. Mike’s out of Toronto,” McArthur said. “They a great team and it’s fun to play against better competition.”

The 18-year-old felt his team hung tough versus St. Michael’s, one of the top four seeds in the tournament.

“In the first half of the first game, we were in it,” the 6-foot-4 forward said. “The competition helps bring out the intensity in our team.”

The Reds also played well versus St. Thomas Aquinas before running out of gas in the fourth quarter.

“It’s my last All-Ontario, but it’s all good,” said McArthur, who has played four years of basketball at Denis Morris. “We went out with a fight.”

“He rolled his ankle early in the game, but he played with the heart of a lion,” he said. “I don’t know how many rebounds he had, but he must have had double digits and he quarterbacks the back of our zone.”

McArthur shrugged off the ankle injury as irrelevant.

“It was nothing,” he said. “I have had problems with this ankle on and off for the past two years.”

Conlon was happy McArther could soldier on because of what he brings to the team.

“We need a guy like Mitch because we are so young,” he said. “It’s important to have a 12B back, who has been there before and played against these teams.”

McArthur has embraced his leadership role on a team that boasts one Grade 9, three Grade 10s and eight Grade 11s. He knows exactly was his role is on the squad.

“It’s just to keep these guys motivated and to keep them working hard,” he said. “You can see on the court that they are already matured enough and they just have to keep stepping it up.

“This team is going to be awesome next year and the year after.”

Conlon was happy with how his team played Friday.

“It was a good tournament for us,” he said. “I am not disappointed at all.”

He described the Catholic Classic as a good experience.

“This is my first year at DM and I am trying to build a program as opposed to a team,” he said. “Moving forward, I like the way we look, we have a nice junior team coming up and I have a lot of returning players.

McArthur has enjoyed his time playing basketball at Denis Morris.

“I have played here four years and the coaching staff has been great here, Randy especially,” he said. “We have had coaches that have been good before, but he has brought basketball back and has really motivated the guys.”

McArthur is looking forward to the Niagara Catholic Athletic Association playoffs next week.