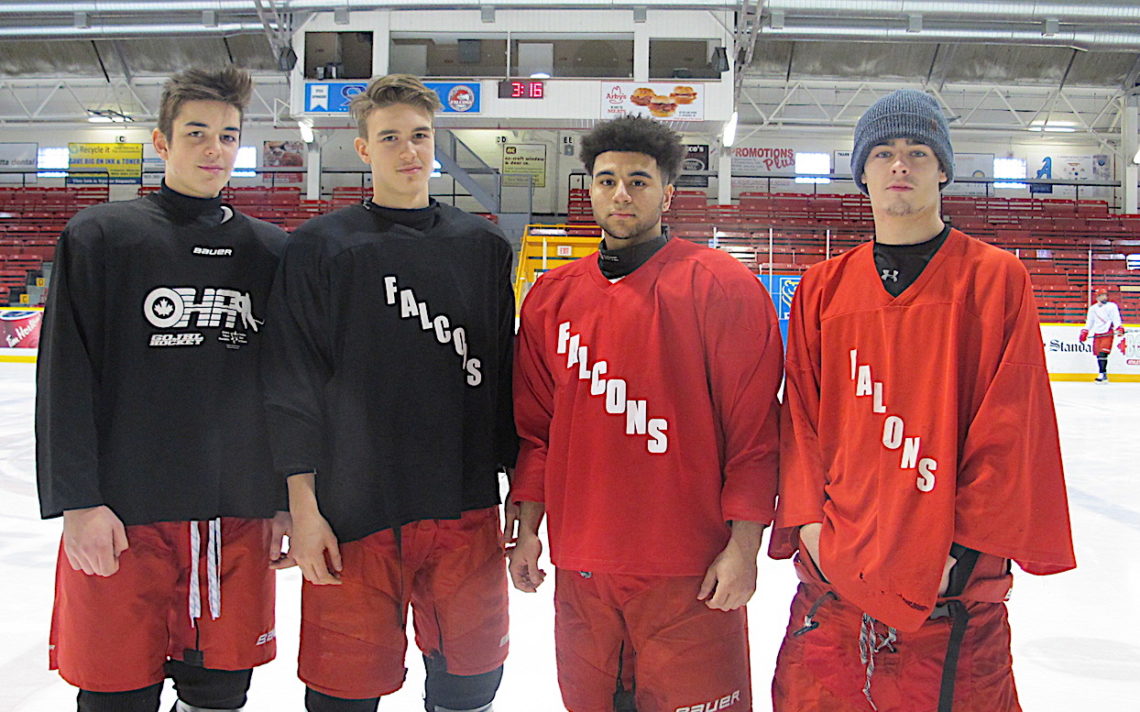 Forward Jaleel Adams and defenceman Tristan deJong will play in the Top Prospects Game while forwards Arber Xhekaj and Carson Eden have been selected to the Future Stars Game.

The Future Stars Game will feature 16-year-old players and will be held at 3 p.m. at the Morgan Firestone Arena in Ancaster Thursday, Dec. 28. The Top Prospects Game, featuring 17-and 18-year-old players, goes at 6:30 p.m.

“We’re very happy for the organization and for them,” Falcons general manager/coach Frank Girhiny said. “We’ve always carried a lot of older players but to be able to have a team that’s fairly young this year and have four guys go, it shows we’re committed to our youth and that they’re developing.

“We’re really pleased to be able to have them chosen to play.”

Players are selected based on submissions from the teams.

Girhiny said he expects the games to be very well scouted.

Adams has already been scouted after being selected by the Niagara IceDogs in the second round (25th overall) of the 2017 OHL Under-18 Priority Draft.

The 17-year-old Beamsville resident has eight goals and 20 points in 31 games.

“He’s continuously improving,” Girhiny said. “He’s an offensive player and he’s always on the ice. He’s the first one on and the last one off.

“He wants to learn and he has an offensive upside.”

Adams will be joined by deJong, a 17-year-old native of Breslau (near Waterloo) who played in the game last year as well.

“His skating is at a high level,” Girhiny said. “For him, it’s just honing his game and playing with more control. He’s a very high-end student so for him there are a number of Division I schools who are interested because he offers the academic as well as being a skilled hockey player.”

Xhejak (pronounced jack-eye) is a 16-year-old Hamilton native who was overlooked in the OHL draft last season and has shown well as a rookie rearguard with four goals and 17 points.

“He’s a big player who can skate and hit hard,” Girhiny said. “He’s going up against 20-year-olds and doing really well. He has a real good shot and a great attitude.

“I think he’s going to be in the OHL next year.”

Eden is a native of Thorold who was a fifth-round selection of Owen Sound in 2017. He played minor midget in Hamilton last season and has not looked out of place as a rookie with six goals and 13 points in 22 games.

“His game has some offence but he’s a real gritty player,” Girhiny said. “He’s very strong. (He) gets to the corner, gets to the net, and plays with an edge. He was off for a bit and we really missed him.”

Tickets are $10 for adults, $5 for children. Children under 12 who are accompanied by a paying adult and wearing a team jersey will be admitted free.

Proceeds go to a scholarship fund which provides financial assistance to players in the GOJHL to assist them in furthering their education.