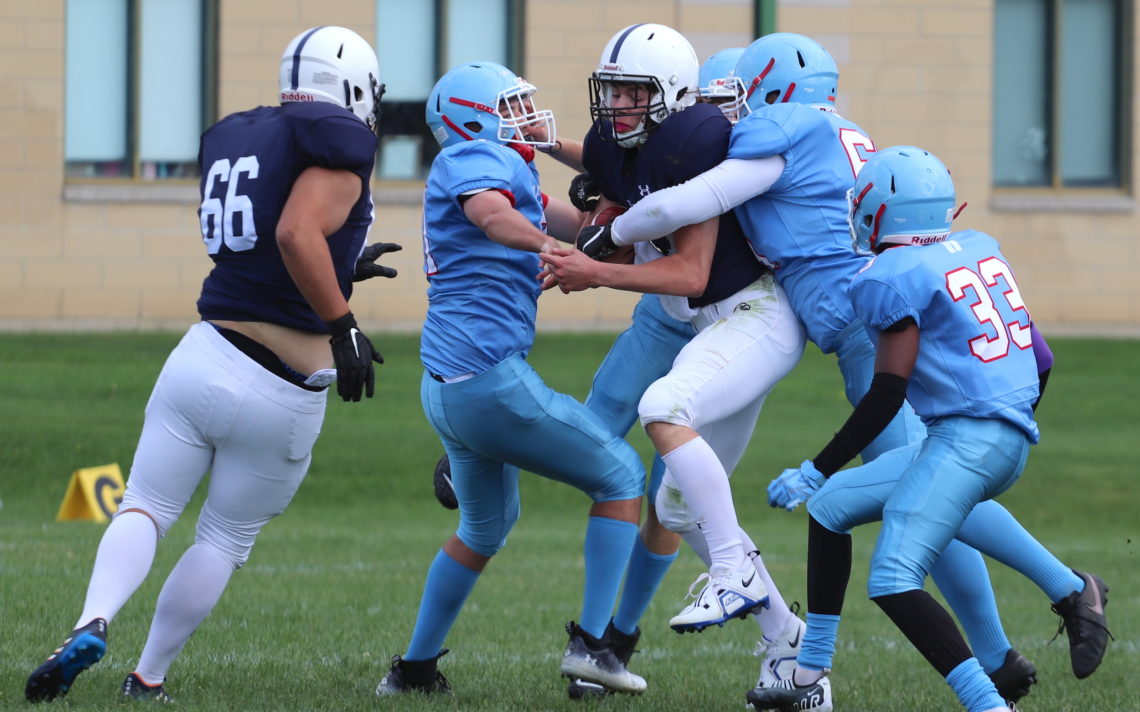 Niagara’s newest high school made its debut on the football field Thursday at Eden.

It turned out to be a successful one as the West Niagara Wolfpack, wearing Carolina Blue uniforms, opened Niagara Region High School Athletic Association play with a 41-6 triumph over the Flyers.

“It is exciting and we like our unis (uniforms). They look pretty sweet,” West Niagara head coach Zach Silverthorne said. “We didn’t know what to expect now with junior and senior because rosters are smaller and the coaches are split in half but we had 14 starters returning. That makes a big difference and we knew we had lots of speed. Our defensive ends wreaked havoc all day and 41-6 with a ton of mistakes is OK.”

Because the new West Niagara high school and turf field is not ready yet, the team will play all its games this season on the road.

Portables have been added near the Grimsby Secondary School field to accommodate the 1,500 students attending the facility while construction is completed. The team is unable to play games at the field but is able to practise.

“We are practising on a field with no lines and some of the kids had never played before but we did OK today.”

The team can’t wait to play on its new field next fall.

“Absolutely and principal (Matt) Miller is looking into getting a scoreboard like what Governor Simcoe has,” Silverthorne said. “It is going to look pretty sweet and Matt has helped us out a lot by finding the funding for 30 new helmets. It’s pricey.”

Murray Hildreth, a 12B student, was thrilled to suit up for the new high school.

“It’s great. It is like a new experience with new colours and a new identity,” the 17-year-old said. “It is going to be a dynasty. We want to do our best so the juniors can take over.”

The 6-foot-1, 190-pound defensive end said the team has lofty goals for its inaugural season.

“We want to win as much as we can and we are going to go hard every game.”

Hildreth would have loved to finish his high school career on a new turf field but he’s not dwelling on it.

“The field doesn’t matter. It is the people you put out on it.”

He’s also not concerned about playing all the games on the road.

“It’s not much of a challenge. We will play hard just like we do at home.”

Silverthorne is glad to have Hildreth, who had two fumble recoveries and a sack Thursday, on his team.

“He is big and strong. He had a big day and hopefully we can build on that next week against Sir Winston.”

Hildreth only plays high school football but he gets plenty of strength and cardio work at home.

“I’m a farmer. I work around the farm and I lift weights a little.”

His days can be busy and sometimes they start as early as 1 a.m.

“We pick peaches, we pack them and then we sell them.”

Hildreth was happy with his team’s debut.

“I think we played hard and both the offence and defence played well.”

The Flyers were done in by a horrible start.

“It was a typical first game of the season and we never recovered from the slow start,” Eden head coach Jeff Webster said.

He knows the team has lots of work to do.

“We knew coming in that we had a lot of athletes and a lot of really athletic kids but the biggest issue we have is that a lot of those kids hadn’t played organized football until today. A lot of those kids got out there and the eyes got real big real quick and the speed got real fast in a hurry.

“We know we are playing the long game and we will see what happens by the end of the season in terms of getting guys up to speed and ready for hopefully a bit of a playoff run.”