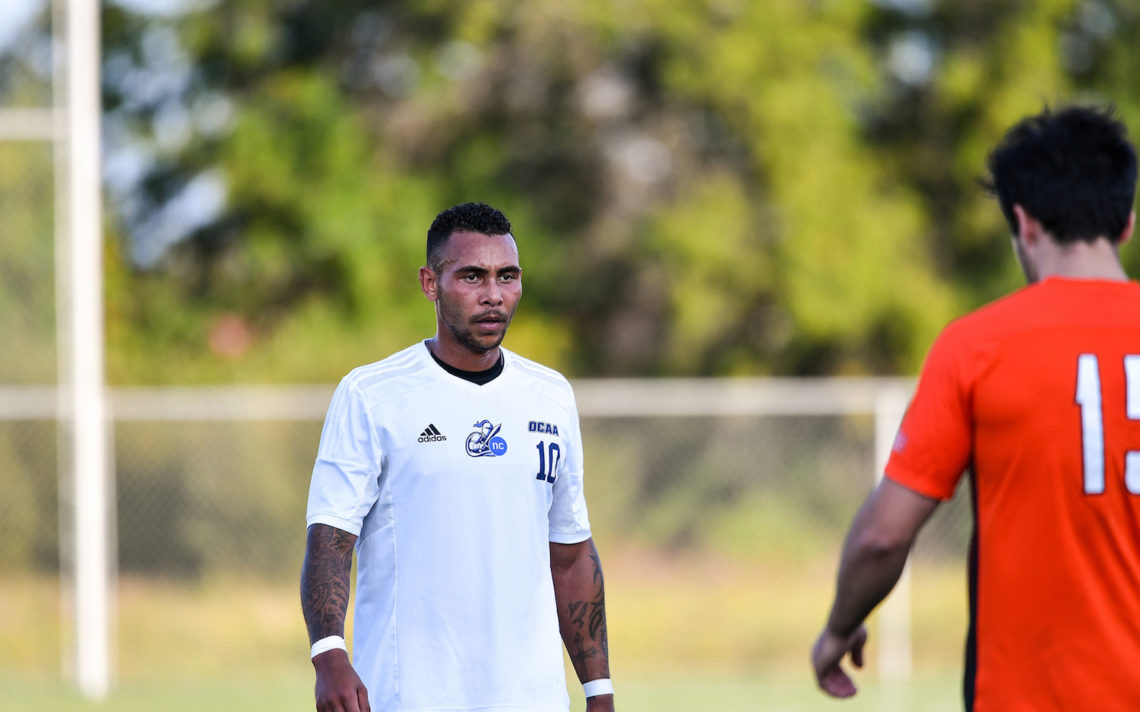 Williams a natural leader for Knights

Carlos Williams is a coach’s dream.

Not only is the 26-year-old St. Catharines native one of the most dangerous snipers for the Niagara College Knights men’s soccer team, but he’s also a selfless leader, on and off the pitch.

“He’s a little older and that changes everything,” Knights head coach Frank DeChellis said. “He almost becomes one of us. He’s serving as a good intermediary and he is somebody the guys can trust and somebody we can trust.

“Carlos has been very humble in regards to his individual accomplishments this year. His desire to achieve our team goal has been his sole motivation. Carlos, like the rest of his teammates, is focused and determined to lead our team to its first ever OCAA championship.”

Williams, who earlier this season surpassed Matt Miedema for most goals in Knights history with 13, takes his role as a leader very seriously.

“Just being an older guy, a veteran and knowing what it takes to get stuff done, you can’t beat around the bush,” the Governor Simcoe graduate said. “You know what you want to do and when it’s time to do it you have to go out there and take what’s yours and show guys.”

Williams said he has always gravitated to the leadership role.

“(It’s) through years of building character and growing up and knowing it’s a team sport, not an individual sport. I’ve played since a young age and have been able to apply that through the years,” he said.

Williams began playing soccer at a young age and by high school had become good enough to play on club and provincial teams.

“My passion grew daily and I kept getting better and kept going with it,” he said.

Williams has always had a nose for the net.

“Even as young player I was always a striker and one of the leading scorers on my teams,” he said. “It’s my go-to. It’s what I’ve always done on any team I’ve played for and I’ve just tried to get better at it as the years have gone on.

Williamson played two years for the Knights while studying customs but wasn’t happy and took a year off and changed his career direction.

He is now a fitness and health major and has his eyes on becoming a certified personal trainer and then majoring in kinesiology at Brock with the long term goal of becoming certified exercise physiologist.

“Customs wasn’t working out. I had to take a couple of steps back and take a year off school and I figured out a lot about myself and matured a bit more,” he said.

The time off seems to have done him a world of good, even if it did cost him a year of playing.

“Time flies. You really don’t realize how fast it goes until you are in it. Our season flies by here just as fast as anything else, school included. It’s just crazy how the weeks go by,” he said.

The Knights are putting together perhaps their best overall season and have high hopes of competing for a provincial championship.

“It’s been a long time coming. This has been our best year at Niagara and mine included,” he said. “It’s really nice to be sitting on top and it just shows you our hard work ethic and determination and commitment to the sport. We just want to keep getting better.”

A championship would be a crowning achievement for Williams as he wraps up his collegiate career.

“It would be unbelievable. I came back to get a shot at a championship with the team we have I think we have a very, very good shot at that.”