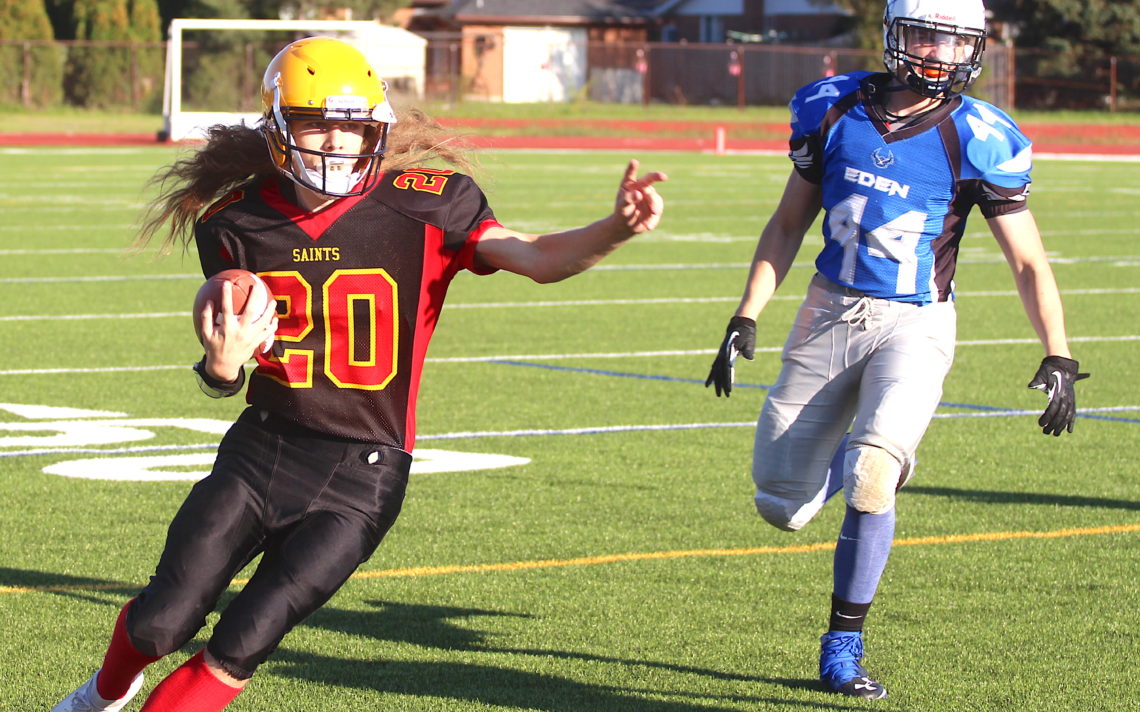 When the Saints go limping in

Before the first half had even ended in what would end up being a 24-2 loss to the Eden Flyers, the Saints were down to their fourth-string quarterback.

“You can’t prepare for that,” Collegiate head coach Nathan Greene said. “I really thought we were ahead of the game when we had four quarterbacks working in Day 1.

“I figured we would be in good shape going into this game and we literally had four quarterbacks go down and I had a  wide receiver playing quarterback at the end of the game.”

Greene preferred not to moan about his team’s bad luck. 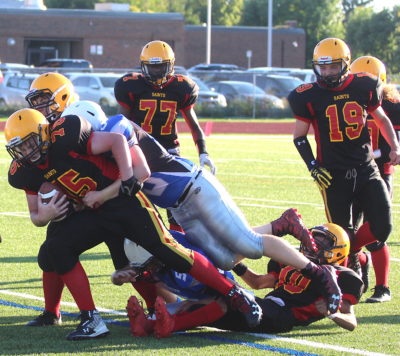 Greene isn’t predicting a championship for his squad.

“We are hoping to get a little better every week and if we get in the playoffs, maybe we can surprise somebody.”

He has been pleasantly surprised with the number of teens wanting to play football for the Saints.

“Our numbers are up,” Greene said. “There are 42 names on our eligibility sheet and we’re getting 25 to 30 at practice.

“The commitment level has really turned the corner this year and we had a big turnout of Grade 9s and that bodes well for us.”

It does bode well for the future, but those Grade 9s are in tough when they are up against Grade 12 and 12B players.

“It is difficult with a varsity team to leverage those Grade 9s but a lot of them played today (Tuesday),” Greene said. “Hats off to those guys who played football for the first time today and were able to make meaningful plays on key downs for us.”

Greene likes what he’s seeing with the development of the football program.

“It is the cultural identity that the captains have brought to the team,” he said. “They have really got a meaningful buy-in from their peers and their friends and they wanted to be part of the football team not just the basketball team.

“A lot of these guys were on the basketball team last year and are trying football for the first time this year. I would have loved to have them when they were in Grade 9 all the way to Grade 12, but I will take the 6-foot-4 basketball player.”

One of those basketball players is Joseph Waterman, who is entering his second season of football.

“I played a lot last year, but I didn’t have as big a role as I do this year,” the 16-year-old said. “They put be at quarterback last season and I didn’t have much training. I had to do it with my athleticism.”

This year, Waterman took it upon himself to recruit athletes for football.

“Coming into this season, there were a lot of people thinking we wouldn’t have a team and the principal and others think I am a leader at the school,” the Grade 12 student said. “On the basketball team, I am more of a leader so I figured If I could bring out a lot of basketball players that I am close with, we could have some success.”