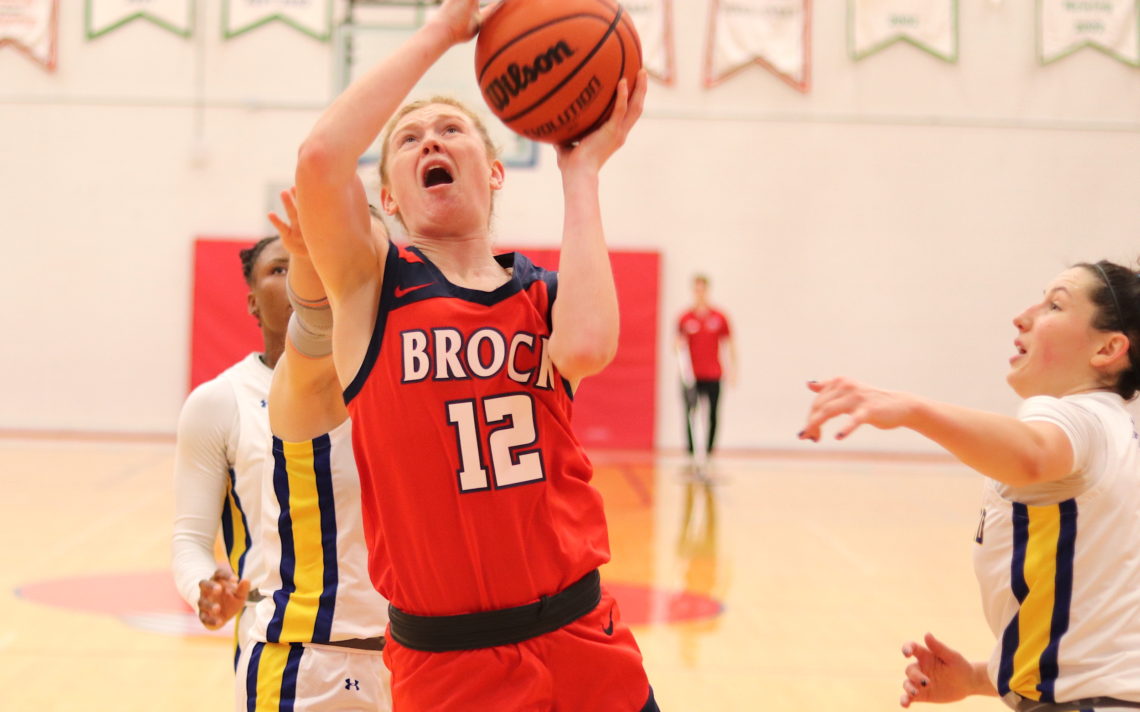 Weinert and Badgers off to 4-0 start

From the moment Madalyn Weinert stepped on a basketball court, she has been fearless taking the ball to the basket and rebounding.

Those traits have continued at Brock University where the second-year athlete is the go-to player with the Badgers women’s basketball team. Saturday night, she was a force especially in the second half, including one stretch where she had three straight offensive rebounds and then concluded the sequence by finishing underneath the basket.

“It is a big team effort,” Weinert said of the impressive stretch. “I was fortunate in that situation to be the one to grab those rebounds but if it wasn’t for the girl who passed it back into me, I don’t get that shot.”

The 5-foot-10 guard would finish the game with 25 points, 13 rebounds and five assists to power her team to a 72-57 victory over the visiting Lakehead Thunderwolves.

“I want to be the piece my team needs in any situation,” the medical sciences major said. “If that is finishing when the clock is winding down or if it’s making the open pass to the right person, wherever they need me is what I want to be doing.”

She knows a big part of her job description is to score the basketball and take it to the rim.

“I am fortunate that I’ve gotten to be a bit of a role player this year and that role is to score a little bit. That is very exciting for me and I try to take it seriously.”

The bulk of her scoring comes from taking the ball to the rim.

“Shooting has never been my love but I have to put the ball in the net somehow. To me, that’s getting to the rim.”

That method is not without pain. The 19-year-old finished Saturday’s game with two red knees, scratches up and down both arms and various other bumps and bruises.

“I feeling it in my glut right now. Someone hit me and I landed somewhere. I’m getting in the ice bath now to kind of help with that.”

“She is something else and her game is really coming. I was really happy with the way she distributed the ball,” he said. “She is going to get those points in conjunction when she finds people and she scores. Those two elements go hand in hand because then they can’t guard her.”

Lakehead played Brock much tougher Saturday compared to Friday when the visitors lost 53-29. Brock led 31-30 at the half and the Thunderwolves were leading 38-27 in the second half before the Badgers started to roll.

“We were better tonight and the only difference is that they shot the lights out. They filled the basket and everything went in the first quarter and much of the second quarter,” Rao said. “Everything was dropping and we were in a catch-up mode but we were playing strong. Our defence picked it up in the second half and that really helped us.”

Weinert agreed with that assessment.

“They made some really good shots and that’s what happens. It goes up and it goes down so it was staying in control of our game and understanding that we were going to figure it out as we played together,” she said. “We were going to stick to our defence and when we get a chance on offence we were going to make the most of it.”

At the start of the year, Rao described the Badgers as in a rebuilding phase but Weinert believes Brock is ahead of schedule.

Brock improved to 4-0 with the league but Rao is a long, long way from getting too excited.

“These games were ones we had to get under our belt and now we need to steal a few. Waterloo and Mac are going to be tough, tough games. We are going to play hard and work but we will have to get into those games as well,” he said. “We have to get better every day.”

Up next: Brock hosts Waterloo next Friday at 6 p.m.

The Badgers opened weekend play with a 53-29 victory over visiting Lakehead Friday.

Topping the stat sheet for Brock were: Noor Bazzi with 13 points and eight rebounds; Madalyn Weinert with nine points and nine boards; Theresa Brown with seven points; and, Audrey Ntetani Umba and Allie Addy with five points each.