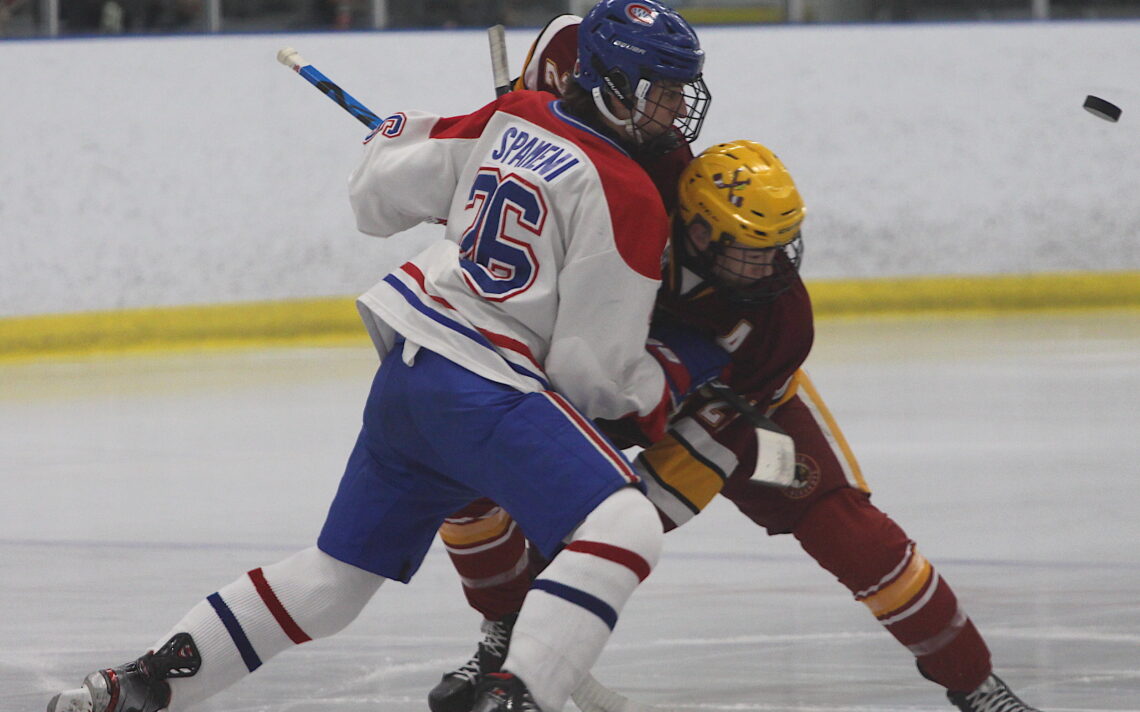 Thorold Blackhawks coach/general manager Scott Barnes isn’t big on bringing back players from higher levels of junior, but he was more than happy to make an exception for Adrian Diodati.

The 18-year-old Niagara Falls native played last season with the Blackhawks before moving to the Navan Grads of the Central Canadian Hockey League this season.

But Diodati had some off-ice concerns which pulled him home and contacted Barnes just after Christmas to see if there would be a fit to return.

“I knew I wanted to say loyal,” Diodati said. “When I was younger, Scott always gave me the opportunity and I liked what the team was doing this year. There’s a lot of returning players and some young guys who have come in.” 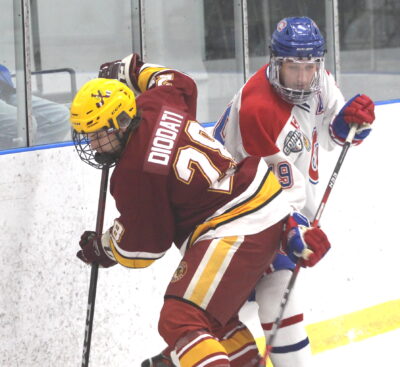 Barnes was thrilled to add Diodati.

“It was a perfect fit. I was looking for another top six player, somebody with size and he’s both of those.”

Diodati has a goal and an assist in six games since his return playing with Wyatt Gibson and Nathan Kelly.

“It’s a great feeling the coaching staff and my teammates have the trust in me,” Diodati said. “I wasn’t really getting that opportunity in Ottawa so it took a few games to adjust back into that role.

“This rink is a lot different, obviously. It’s newer and we’ve got a lot of support from the community in Port Colborne, which is good. It’s different, but change is good sometimes,” he said.

Diodati kept track of his former team while in Navan.

“It’s crazy to see how we started the year,” he said. “I wasn’t here for that but I was following along to see how hot they got and even going into the break. They really turned some eyes and I think we’re going to continue to do that going into the playoffs.”

Barnes is happy the way the Hawks are playing with 13 games remaining in the regular season.

“It’s something I’ve been really stressing to the guys. Going into our last 10 games of the year we really want to be playing the hockey we need to be playing,” he said. “The guys are now, for the most part, the ones who are recognizing the problems on the ice. It’s where I wanted to get.”

The Blackhawks won a pair of games over the weekend — 6-2 at Niagara Falls and 4-2 at home over Welland Saturday — to improve to a very respectable 20-16-1. They lead the Caledonia Corvairs by two points for fourth place with a game in hand.

“We are in battle for Caledonia for home ice,” Barnes said. “Every game is pretty big. In February, four of our last 10 are against Caledonia. It’s not going to be a cruise into the playoffs. We’re going to have to be in playoff mode from here on in.”

Tucker Adams made 34 saves for the win.

The Fort Erie Meteors made it nine wins in a row at the Leisureplex with a shutout victory over the Pelham Panthers.

Nolan Lane turned back 20 shots for the shutout.

“We took care of business. On to Tuesday to see where we stand,” Passero said.

The Caledonia Corvairs jumped out to a 2-0 lead en route to a 4-2 win at home over the Niagara Falls Canucks.

Marek Pavlas made 31 saves in net for the win.

Alexander Hebblethwaite and Will Bray replied for the Canucks.

Leland Gill made 21 saves for the shutout as the Hamilton Kilty B’s blanked the Pelham Panthers Sunday afternoon in Pelham.

The St. Catharines Falcons made it six wins in a row with a 3-1 victory at Welland.

Cameron Lowe, Blake Yetman and Nate Robertson scored for the Falcons, who improved to 31-4-2 and lead the Golden Horseshoe Conference by two points over Hamilton.

Stephen Toltl made 31 saves for the win.