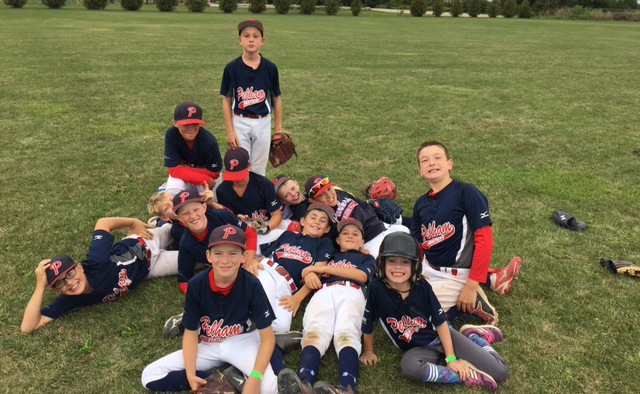 The weekly “This Week In Baseball” articles overview the activities of various Pelham Minor Baseball Association teams.  Teams span from T-Ball to Midget age with several rep teams representing Pelham across the region.  Please watch for some familiar names throughout the season!

The Group 92 Mechanical Rookie Rep team has finished their season strong. The team was away in Kingsville for the Ontario Baseball Association’s Labour Day weekend tournament and lost 2 games and won one game. The last inning come from behind win was one of the best moments of the season for the kids! Down 3 runs going into the last at bat, the team fought hard to prevail. The growth and improved throughout the season on both an individual and team level has been amazing to witness. The players are eagerly looking forward to next year and another season of playing baseball!

The Miller Restoration Mosquito Rep team hit the road to Essex for their OBA finals. The epic game came for the Panthers early Saturday morning when they faced off against Kingsville. The 10 inning game saw both teams fighting hard to best the other, each time tying it up to push to a new inning. Taking the mound for Pelham was Mitchell Morden, Andy Nawrocki and Ty Pelletier and all did a fantastic job at keeping the batters off balance and the score within reach of the Pelham bats. Julian Rubino had several great plays at second base, Max Myers and Austin Wilson made crucial fly catches in the field and Matthew Oakes caught several hot line drives at short. Connor Jolicoeur made a great pick-up and long throw from third. Catcher Cameron Wells had the best game of his season, throwing out two runners at first, one at second and a diving tag out at home plate. First baseman Chase Munn not only laid the expert tags from the catcher’s pick-off throws, but also caught a screaming line drive and made several unassisted outs. Although everyone contributed to the offense, key hits were made by Max Veld, who smoked one to deep outfield, Chase Munn’s RBI triple and Julian Rubino’s bases clearing double. In the 10th inning, Maverick Halstead tied up the game with his walk and trip around the bases. With two outs and Ty Pelletier on third, Andy Nawrocki hit a single to score the winning run in walk-off frenzied fashion.  All of the boys agreed that this was the best game of the entire season, saving the best for last!

The Pelham Medical Associates Rep team made it to the final four teams in the Waterdown OBAs, facing off against Listowel in the semi-finals on Sunday morning.  To advance that far, the Panthers won their first three games of the tournament. Ethan Wells pitched the first game of the tournament holding the offense to just 2 runs over six innings and hitting a game tying double. Tied in extra innings, Jake Passmore got on base and stole his way to third for Jake Laewetz to hit him home and take game 1! Game 2 against rival Wyoming saw Ryan Culig take the mound. Keeping the game close, reliever Nate Girling threw out a runner on first and second baseman Cole Townson fielded a great bunt to get the out. Left fielder Owen Nicholls caught a long fly ball to get out of the inning. In the top of the 7th, down by two with bases loaded and two outs, Andrew Behring hit a bases clearing double to take the lead and the eventual win. Tillsonburg was the next opponent to knock down and relievers Will Baltrusiunas and Wyatt Gibson pitched well to save the game for the third straight win. In game four against Belle River Lucas Grant hit a single and played a solid second base. Tyler Hunter hit an infield single, using speed to outrun the strong throw. Right fielder Jake Kalailieff made a strong throw to hold the runner from advancing to extra bases. Pelham was defeated in the semi-final match up against Listowel but was very proud of their strong performance this weekend.

As the 2017 baseball season concludes, Pelham Minor Baseball would like to heartily thank all of the coaches and parents for your support this season.  It takes many hands to field a league from T-Ball to Midget and this year also saw two rep teams for Pelham. It is our desire to continue to grow baseball in Pelham and enable many children to enjoy the athletic and social benefits of team sports. Registration for 2017 will be open soon. Please consider registering early as it enables organizers to book fields and have as many teams as possible. PMBA would also like to thank our sponsors of the 2017 season, including Tim Hortons and Future Stars Photography (T-Ball League Sponsors), LaFarge Holcim and Willowbrook Nurseries (Rookie League Sponsors), Meridian Credit Union and Boggio Fonthill Pharmacy (Mosquito League Sponsors), Group 92 Mechanical and Mossimo’s Pizza (Rookie Rep Sponsors), Miller Restoration, J Oskam Steel and Bromac Construction (Mosquito Rep Sponsor), Pelham Medical Associates and Girling Automotive (Peewee Rep Sponsors), Fonthill Lions and Willowbrook Nurseries (Peewee League Sponsors), Bissell’s Hideaway (Bantam League Sponsors), Fonthill Dental (Bantam and Midget League Sponsors) and the Fabulous Fenwick Lions (Pitch, Hit and Run Competition Sponsors).