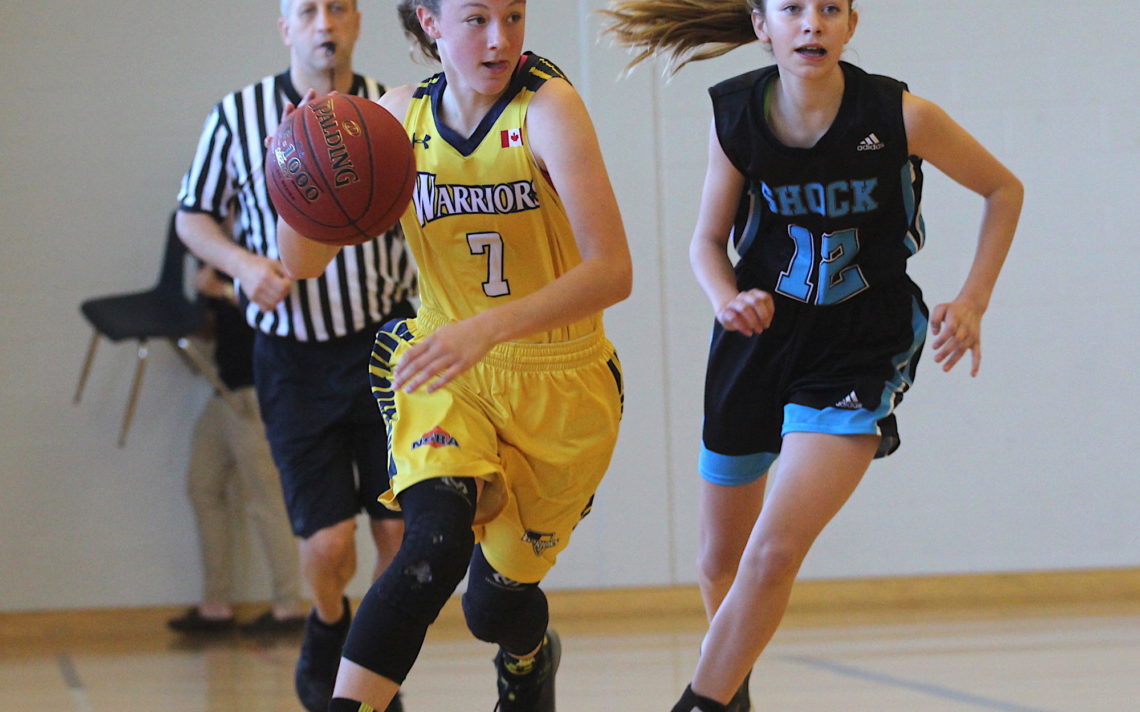 The Welland Warriors under-14 girls basketball team has been on a mission since the winter when it heard the winner of the Basketball Ontario Division 1 championships would represent Ontario at this weekend’s U14 Jr. NBA Canadian Championships in St. Catharines.

The winner of the Canadian championships will move on to represent Canada at the U14 World Jr. NBA Championships in Orlando Fla.

“I was really excited because we knew we had the ability to win this,” 14-year-old Welland native Gabriella DiPietro said.

Welland punched its ticket to the tournament in St. Catharines by defeating Hamilton Transway 59-51 in the provincial finals.

“We worked hard the entire time at OBAs (Basketball Ontario championships) to get here and it’s like a dream because it is a once-in-a-lifetime opportunity for us,” said DiPietro, who scored 10 points Friday morning as Welland opened the championships with an impressive 78-22 victory over the Saskatoon Shock.

The Grade 8 student at St. Andrew’s has been eagerly anticipating the tournament for months.

“I am looking forward to playing all the teams to see how good they are and working together as a team to get better,” she said.

The majority of Welland’s team has been together since starting together in the under-nine division.

“Everyone works together as a team and it’s a not a one-man team,” said DiPietro, who is heading to Notre Dame in the fall.

“I was excited,” DiPietro said of Welland’s first game. “I was kind of nervous at the beginning, but as soon as I got on the court I was fine.”

She was more than fine as head coach Picton chose her as the team’s player of the game.

“She was the one who came out and started great for us,” he said. “She started in tempo, made some good shots and she is an unbelievable defensive player and really strong in the open court.”

The Warriors came into the tournament on a roll.

“We played two weeks ago in Cleveland and we won the Zero Gravity tournament,” Picton said.

To prepare for the Canadian championships, the Warriors have been doing a lot of skill training in the Niagara Girls Basketball Academy.

He liked what he saw from his team in its opener versus Saskatoon.

“I am super happy because you never know how nervous they are going to be and there were a couple of classes that came out to watch the girls today,” Picton said. “They were a little nervous, but it was great to get a good win and we did some really good things.”

Picton is confident in the abilities of his team on the national stage.

“I think Ontario is really competitive and I think a team like Transway, who we beat in the finals, could step right in here and really compete, and the same with Caledon,” he said. “We are very battle-tested.”

After Friday morning’s game, Welland played Quebec at 5 p.m. Welland then plays Alberta at 2 p.m. Saturday at the Bob Davis Gym at Brock and then Nova Scotia Sunday at 10 a.m. at Brock.

The gold medal game for the girls will be played Sunday at 3:30 p.m. at the Meridian Centre followed by the boys final at 4:30 p.m.

The tournament is part of the festivities surrounding the FIBA U18 Americas Championship being played June 10-16 at the Meridian Centre in St. Catharines.