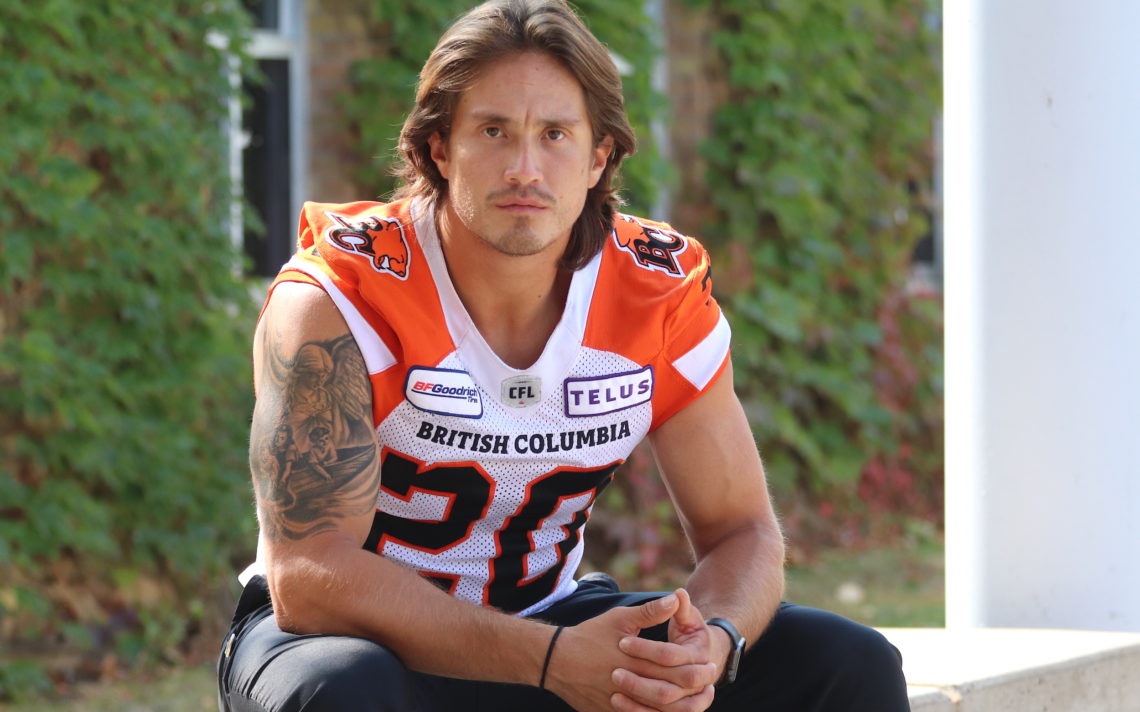 Mario Villamizar returned to his football roots this week.

The 25-year-old fullback with the CFL’s British Columbia Lions paid a visit to Holy Cross to present his alma mater with a signed jersey.

“This is where my love of football really started with Mr. (Dave) Thomson and Mr. (Jim) Craig,” the 6-foot-3, 237-pounder said. “They put something in me that made me want to come back every single day, especially during football season, just to get better and better. Coming back to see those two guys is probably the most important thing for me.” 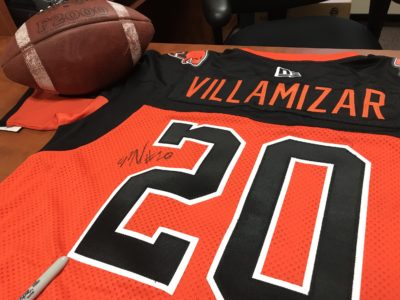 “They lit a fire in me all through my five years of high school here.”

Both Craig and Thomson taught Villamizar throughout high school and coached him in his three years of senior football at Holy Cross.

The Laurier graduate and former Golden Hawks football player has tons of fond memories of his time at Holy Cross.

“We won a championship here in my Grade 12 year with Mr. Thomson and Mr. Craig. That was the probably the highlight of my high school career because not too many people get to say they won a city championship.

“Even though it was an AA championship, it was amazing because I got to do it with all my best friends and guys who I am still best friends with right now.”

Villamizar was the quarterback of that championship team before being recruited as a receiver by Laurier. He caught some passes at Laurier but he quickly found his niche as a blocking fullback.

“The biggest thing I tell the younger guys is that I have been fortunate enough to play every position on the football field and it opens up the way you see the game.”

He went from a glamour position in high school to an unheralded role in university and the CFL.

“You definitely go from being the guy to being a situational guy, but I love football and I would play anywhere. I know there was one point they were joking around with me because I had gotten a little too heavy and they told me I might have to play O line. But I was like, it’s whatever I need to do to help the team, wherever you want to put me, I will go and do it.”

His quarterback training paid big dividends for the sixth-round pick of the Lions.

Villamizar took to his role as a fullback and that dedication to his craft landed him a CFL contract. He uses his experiences to help motivate others.

“I tell the younger guys that if they love football, just go and learn that position,” he said. “Here (Holy Cross), I played defensive end, linebacker, fullback, quarterback, receiver and all over the field. It helps you understand the game that much better.” 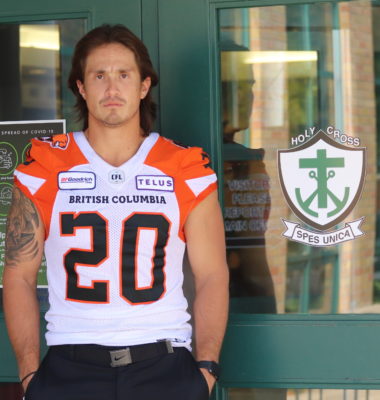 “In the CFL, the fullback is utilized a lot on special teams and as an extra blocker, but you do get the opportunity two or three times during the season to show that you can catch the ball and do those other things.

“You have to earn the right to do all that other stuff.”

The former Ontario University Athletics Second Team All-Star was more than happy with his rookie campaign.

“Going into camp, the focus was just making the team and I did that. The next focus was I wanted to dress and actually play,” he said. “I was fortunate enough to play in all 18 so it couldn’t have gone any better from what I had envisioned.”

The former Niagara Spears travel player is far from satisfied.

“It is something to build towards next year for whenever we can play again.”

He felt the biggest adjustments to pro ball were the speed and size of his opponents.

“In university, I got away with being 250 pounds and still able to run down the field and keep up with everybody,” he said. “I got to the CFL at 237 pounds and even then I was having trouble keeping up with guys.”

By the fourth week, he was up to speed.

“If you are really practising hard and training the way you are supposed to be going about it, I find you adjust very, very quickly.”

He adjusted his training for his first off-season and he focused on getting leaner, bigger, faster and stronger.

Villamizar made improvements in all those areas.

“I continued training like nothing had happened and I was fortunate enough during the (pandemic) closing that I was still able to get out on the field to do runs and do all the body weight stuff I needed to do.”

Then word came down in August that the season was cancelled because of the COVID-19 pandemic.

“When it happened, it was kind of a weight off my shoulders,” he said. “Having to sit there and, at any point in time, having to fly out to Winnipeg or B.C., that uncertainty was hard to live with.”

After the cancellation, he took a week off and got back to work.

“Now I have eight months to get ready and I am doing even more training.”

He works out five days a week and does two sessions on Tuesdays and Thursdays. Despite having no clue when football will resume, Villamizar isn’t lacking motivation.

“I have been fortunate enough to surround myself with a lot of really, really good people who keep me motivated.”

He trains at the Iron Performance Center and his training partner is Miles Methner. 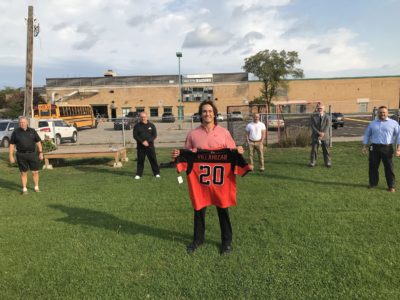 “I have also been fortunate to make great friends in the CFL after that first year and keeping in close contact with those guys keeps you motivated,” he said. “Keeping each other accountable is the biggest thing.”

He can’t wait to return to play.

“It’s a lot of fun,” he said. “It is stressful during the season and a lot of people don’t really understand all the training that goes on behind closed doors. They only see the product you put out on the field on the weekend.

“It is not as glamorous as everyone thinks but who else gets six months off?” he said, with a laugh. “I am very fortunate I get all this time off and I get to do a lot of things in the off-season that I enjoy.”

His welcome to the CFL moment came during his first game at B.C. Place.

“I absolutely got smoked on the field and laid out. Getting up and sitting on the bench, drinking water and looking up at the Jumbotron, it was ‘Oh my goodness. This is legit.’ That is when it kind of hit me that I was playing professional football.”

Villamizar graduated from Laurier with a major in sociology and a minor in criminology. He will one day pursue a career in law enforcement but that is very much on the back burner.

“My goal is to hopefully play double digit years,” he said. “I would like to say I played 10 years in the CFL, but if doesn’t happen, it doesn’t happen.”