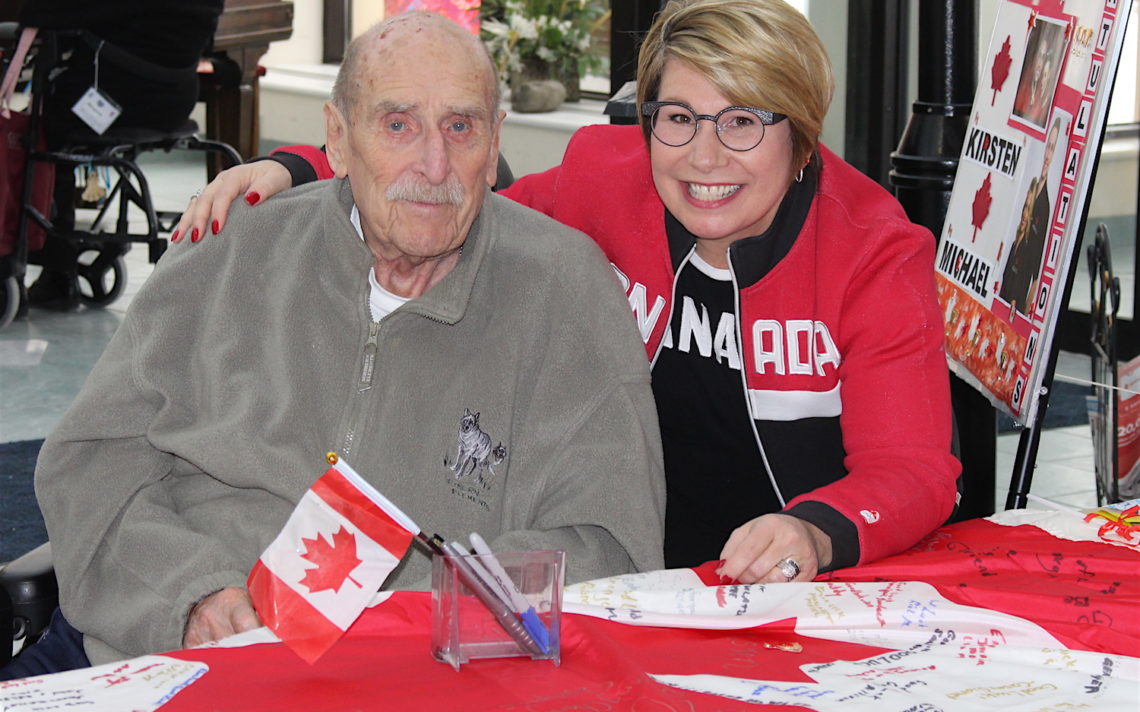 A village supports its Olympians

Niagara Ina Grafton Gage Village resident Frank Tod — just like God but with a T and not a G according to Frank — and Sherry Towers sign a Canadian flag that will be sent to Olympic figure skater Kirsten Moore-Towers. Photos by BERNIE PUCHALSKI.

Residents and staff at the village gathered Wednesday to sign a Canadian flag that will be delivered to Olympic figure skating Kirsten Moore-Towers in South Korea. On Saturday, they will do the same for Canadian bobsledder Jesse Lumsden.

In both instances, family connections brought the flag signings to the residence. Moore-Towers’ mom, Sherry Towers, is manager of finance at the home and has worked there for 26 years. Lumsden’s 94-year-old grandmother, Flo Warner, has lived at Ina Grafton for the past seven years.

“When she moved in not long before the last Olympics, we connected over our kids being Olympians,” Towers said. “She is an amazing woman and Donna (Lumsden’s mother) is too.

“It’s so special to share that type of experience because it’s not something that everybody gets to do. Its a small, small world.”

Four years ago, the pair celebrated together when Jesse and Kirsten were named to the Canadian Olympic team.

The bracelets, made by Jesse, were and still are hot ticket items. 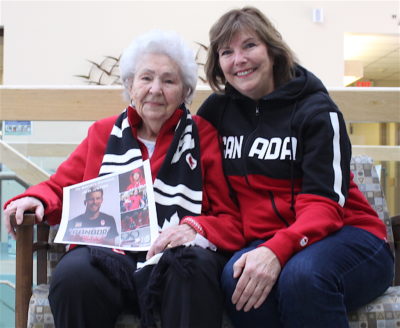 “We sold a lot of them and my granddaughter, who works in Hamilton, is still selling them,” Warner said.

The nonagenarian’s eyes sparkle when she talks about her grandson.

“It’s hard to explain how proud I am of him,” said Warner, who was born and raised in St. Catharines and went to Merritton high. “I have seen him through three Olympics.”

She will be watching the Olympics on TV with mixed emotions.

“I am scared and I am hoping they don’t crash,” she said. “I am rooting for them and then I get mad when it’s a fraction of a second they lose by.”

She knows this might be the last time she sees Jesse at the Olympics.

“I think now that he 35, he’s realizing that he has a little girl and because he’s a daddy now and getting up there, that this will be his last Olympics,” she said.

Warner, who has six grandchildren and five great-grandchildren says Jesse is her favourite — at least on this day.

“Of course,” she said, with a laugh. “I have his mother sitting right here.”

Donna and her husband, Brock athletic director Neil Lumsden, will be leaving for South Korea on the 16th of this month.

“There is so much excitement and pride but there’s fear too,” Donna said. “And like mom said, when it gets down to hundreds of a second being the difference between a medal and not, you know how much work he and his teammates have put into it and we feel for them.”

She has always been impressed with the way Jesse has handled adversity. He is far better at it than her.

“His mother not so much,” she said. “There are many times when I leave the house to walk the dog and I will be kicking and screaming — not (kicking) the dog — just trying to release things so I don’t express it to him because we know how disappointed he is.”

At the last Olympics, Jesse was a member of the Canadian four-man bobsled that crashed and saw its Olympic dreams dashed.

“He made a pact that he was going to come back because there was business unfinished,” she said. “He took two years off to start working in Calgary and made the commitment to come back for the next two years to prepare for the Olympics.”

In 2010, Jesse was on Canadian squads that finished fifth in both the- two-man and four-man events. Donna described that first Olympic experience as surreal.

“In the middle of January, we had no idea he was going to the Olympics and then we got the phone call and in six weeks we had to pull it all together and get out there,” Donna said. “Our first live race was at the Olympics.”

Sherry Towers will be going to her second Olympics in support of her daughter.

She was present when her daughter won a silver medal in the team event at the 2014 Winter Olympics.

“That was absolutely amazing and I can’t even put it into words,” she said. “Actually, watching her receiving the medal was the most special because you think back to when they were little and the hopes and dreams they had.

“You hope and I believed it was going to happen, but to see it actually happen is so surreal.’

Towers leaves for South Korea this coming Friday and her moods will mimic her daughter’s.

“If she seems calm, cool and collected then so am I,” she said. “But if I see that she’s a little bit on edge, then so am I.”

There will be a large cheering section for Jesse and Kirsten at the village.

“The residents  and staff have always been incredibly supportive of Kirsten’s skating career,” Towers said. “Residents gather in one of the lounges here and watch the skating events on TV together and staff gather in the boardroom.”

Editor’s note: Special thanks to village cafe owner/operator Lida Samardzic for feeding a hungry writer a delicious lunch of perogies and Caesar salad.