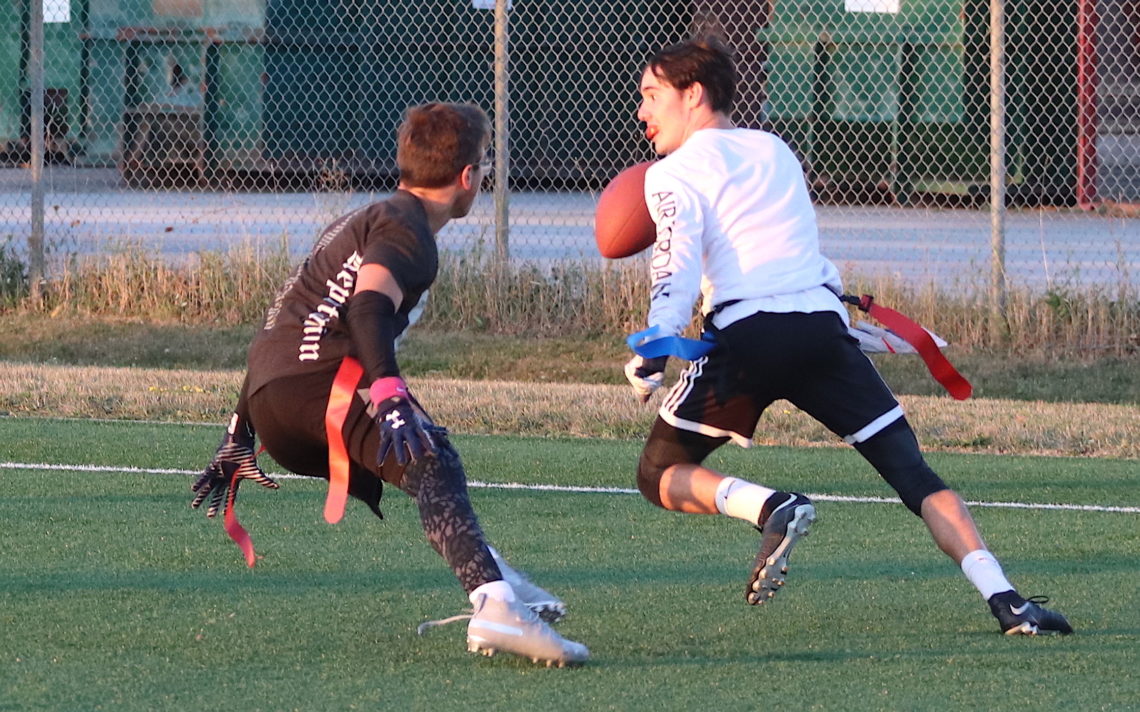 The Niagara Regional Minor Football Association was not alone in seeing its flag football program tackled by the COVID-19 pandemic.

The first season was supposed to run from mid-April until the end of June in 2020 but the COVID-19 program sacked that idea. The association was then able to run a free program in September when conditions improved.

“COVID affected us as much as it did anybody else,” league convenor Jim Storin said. “We ran a free flag league last year and we were hoping that would catapult our flag season for 2021 but unfortunately COVID stopped that.”

But with pandemic conditions improving as more and more people get vaccinated, the association has launched a pair of flag football programs.

“We have partnered with Under Armour Under the Lights for our flag program and will be running a full regional approach coming this fall,” Storin said. “We looked at it and we thought it would be the best for the Niagara Region with increased branding with Under Armour and that sort of stuff.

“Kids would end up with more tangible take-home stuff then what we would normally give out. Not that we don’t give out good stuff, but to have an Under Armour logo on it increases the value.”

Nice swag was only part of why the association has partnered with Under Armour.

“The Under Armour philosophy lined up with how we run our minor system in tackle,” Storin said. “Everybody plays and it is about fun and competition all together. We want kids to play with their friends, that’s the priority, and even pick their own coach. If they have a dad or an uncle or mom or sister who wants to coach their team, they can bring their own coach with them. That’s what we want and it makes my job easier.”

Before launching a regional program this fall, the NRMFA is running a recreational league that started this past Sunday at West Park Field on Louth Street. All games will played on Sunday morning starting at 9 a.m. and divisions include kindergarten to Grade 2, Grade 3 to 4, Grades 5 to 6, Grades 7 to 8 and Grades 9 through 11. A total of 215 kids signed up for summer league.

The fall league will be divided into the association’s five city centres — Niagara Falls, St. Catharines, Fort Erie, Welland and West Niagara — and each will have their own Under Armour Flag leagues for kindergarten to Grade 2, Grade 3 to 4, Grade 5 to 6, and Grade 7 to 8.

Once there is a champion crowned for each of the four age divisions in each city, they will meet as a region and have a championship. Winners would then move on the provincial level and potentially national level.

Games will be played: at Saint Paul in Niagara Falls; at Kiwanis Field in St. Catharines; at Youngs Sportsplex in Welland; at Crystal Ridge Park in Fort Erie; and, at Smithville’s Leisureplex Park in West Niagara.

“Under Armour sees us as a region rather than a locale and we have all the rights for the region,” Storin said. “We can pop up as many Under Armour flag leagues in the region as we want. If Niagara-on-the-Lake or Thorold get enough kids, we can start leagues there. From a flag football standpoint, this will help rejuvenate football in Niagara.”

The association is hoping to attract 80 or more kids for each city centre for the six-on-six games.

Cost is $200 if paid before July 23, $225 if paid by Aug. 20 and $250 for any late registrations. There is a discount for additional kids in a family but the discount doesn’t apply for early registrations.

Every player in the league gets an Under Armour jersey and shorts.

Interested players should register at www.uaflag.com. Those using help for registration fees from programs such as Canadian Tire Jumpstart need to do their registration through the NRMFA. For information about the leagues, contact Storin at 289-241-9147 or email info@footballniagara.com. The league is looking for coaches to help and high school students looking to earn volunteer hours.