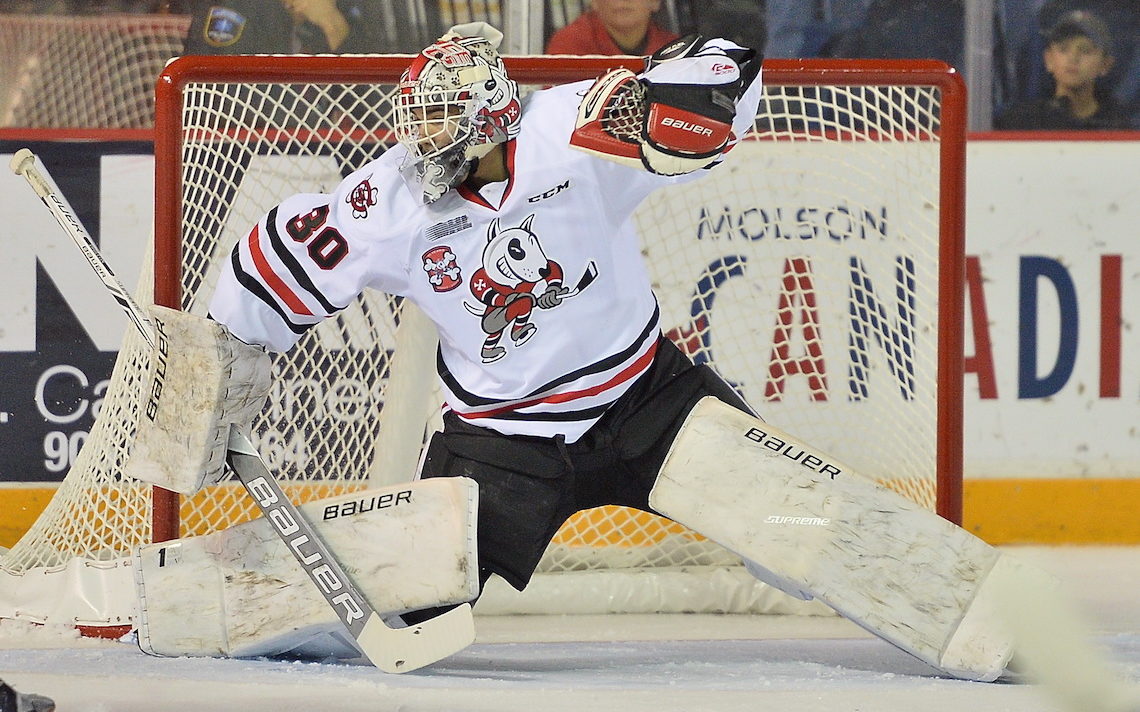 The Niagara IceDogs gave Stephen Dhillon the night off Saturday.

The veteran netminder still started between the pipes, but had to face only shots 25 shots in a tough 1-0 overtime loss to the Ottawa 67’s in Ontario Hockey League action at the Meridian Centre.

The IceDogs (7-2-2) still pick up a point with the loss in overtime.

Ottawa won the game when Sasha Chmelevski scored with a quick backhand shot over Dhillon’s shoulder with just 4.3 seconds remaining and a shootout looming.

Dhillon, who set an IceDogs record for shots faced last season, felt he should have made the stop.

“You have to get a save there. There’s four seconds left and I have to make that save,” Dhillon said candidly.

“It’s been nice not having to face 45 or 50 shots a game, but at the same time, it’s fun when you face a lot of shots and you get into the game very quickly. You’re always dialled in,” Dhillon said. “With less shots you have to be sharp all the time because you may have a couple of minutes where there may be no action. It’s a little different but I don’t really change my approach.”

It is hoped by Dhillon seeing a little less rubber during the regular season he can stay fresher down the stretch and into the playoffs.

“It’s still early in the season so we’ll see how it translates down the road,” Dhillon said.

The IceDogs had more than their share of chances to put this one away, including hitting a goal post in overtime.

“It’s a game we wanted to win and we pushed them hard, we just couldn’t get the win,” Niagara coach Billy Burke said.

Overall, Burke will take the point which gives Niagara three of four for their two games this week.

“The effort was there. It wasn’t like they were cheating. We just couldn’t execute,” Burke said.

The game unfolded pretty much as Burke and his staff figured it would.

“We knew for sure. I think half of their games have gone into overtime,” Burke said. “Almost all their wins have been one-goal games and they were in overtime last night.

“They are a good team and play a good game. They’re speed was good, their structure was good.”

Ottawa held the edge in play in a scoreless opening period although the IceDogs held a 12-6 edge in shots.

It was more of the same in the second as the teams continued to play defence first which resulted in good scoring chances few and far between. Niagara led 18-15 in shots after 40 minutes.

Ice cubes: Jukka Schotter, Johnathon Schafer, Joshua Dame, Ian Martin and Billy Constantinou did not dress for the IceDogs  . . . Oliver Lafreniere, Seva Losev and Kyle Auger were scratched for the 67s . . . The IceDogs held an auction following the game for the special jerseys they wore as part of Autism Awareness Night.

For the Niagara IceDogs: No scoring.

Up next: Home to Oshawa next Thursday and Sudbury next Saturday.