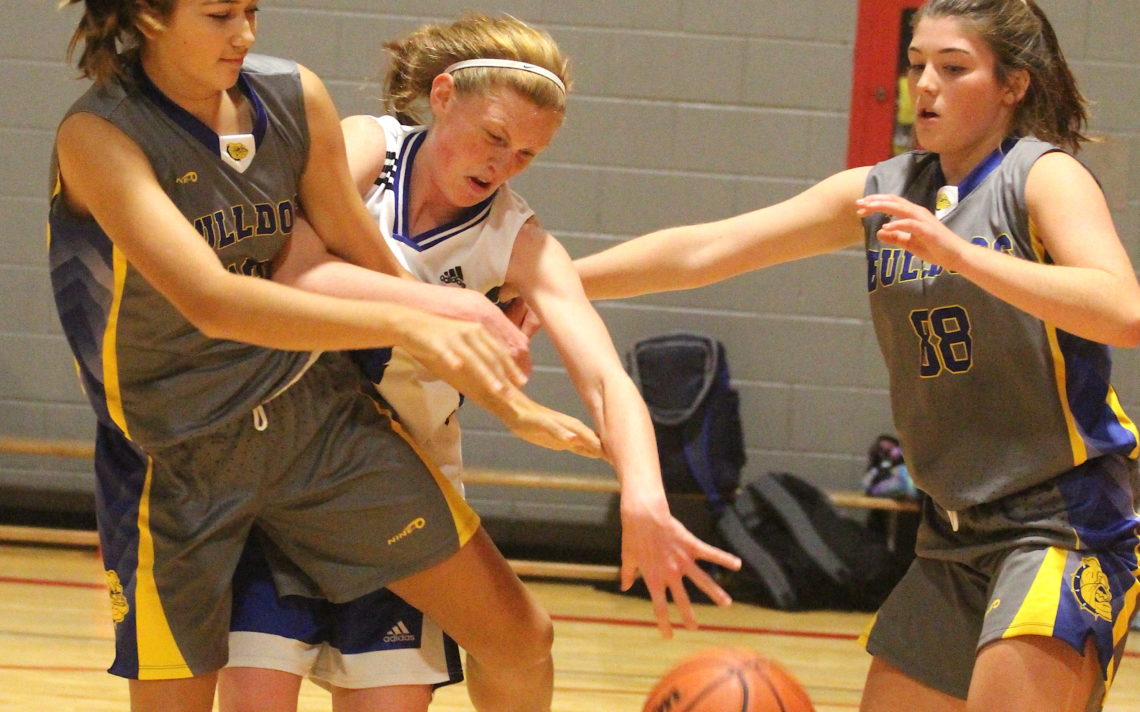 It’s easy for Kennedy Millin to get overlooked on a Sir Winston Churchill Bulldogs girls basketball team loaded with talent and three-point snipers.

The Grade 10 player scored five points as the Bulldogs defeated the Eden Flyers 56-45 Thursday in the championship semifinals of The First BPSN Girls Basketball Tournament, but it was all the others way she contributed that made a huge difference. She played great defence, she set screens, she rebounded the ball and she did all the little things that make her an integral part of her team.

“She is so long, it’s crazy. She is like a 6-foot-3 girl in there because she is so long and she can jump, she is fast and she is quick,” Churchill head coach Frank Keltos said. “She is also a lefty, there’s lot of things that she brings to the table and she does all the little things.”

“She never gets really tired and that the nice thing,” he said. “You can play her the whole game.”

The 15-year-old used to play travel basketball with the Welland Warriors before deciding to focus her travel activities on volleyball with the Niagara Rapids. She has been playing with the Rapids since she was 12 and is now on that organization’s 18 and under squad.

The 5-foot-10 player admits she still is fond of basketball.

“It’s the competition and the crowd too,” she said.

Millin takes a lot of pride in all the little things she does to help her team win.

“It’s not about scoring,” she said. “It’s about always being smart, reading the ball and where it goes, and doing the small things to help the other players on the team.”

Sometimes playing school basketball makes her want to go back to playing travel basketball but she enjoys volleyball too much.

Her volleyball training comes in handy for basketball.

“It’s helps with endurance because we do a lot of running and also the jumping helps you get rebounds.”

She works her school basketball schedule around two volleyball practices and two other workouts per week. She never lacks motivation to train.

“I want to get a scholarship for volleyball and I see everyone else working hard every day and pushing themselves,” she said. “I want to push myself every day to become one of them.”

The Flyers pushed the Bulldogs to the limit Thursday. The game was tied 13-13 after one quarter and Churchill led 26-25 at the half and 40-35 after three quarters. Eden was hurt by a miserable performance from the three-point line.

“That’s the way it goes sometimes and a few more free throws and we would have been right there but I am so pleased with how we played,” Eden head coach Brian MacIsaac said. “We stuck right with them and in my opinion they are the strongest team in the region.

“I thought we played great but they forced us into lots of turnovers and I give them credit for that.”

Most people feel Churchill can’t be beat at the local level, but the Flyers put at least a tiny bit of doubt into that widely held assumption.

“It is so difficult to defend them because every player on they roster can hit the perimeter shot which makes it such a challenge,” MacIsaac said. “And they they can sub in a couple of players and they can do the same thing.

“They are obviously very strong and we were right there with them tonight.”

For Keltos, it was just the latest chapter in what has been the best girls basketball rivalry in the city for the past few years.

“We’ve been playing them the last two or three years in either the semi or the final and it’s always a game,” he said. “Sometimes you have to win ugly and it was an ugly win for us.

“Even for them (the Churchill players), they said it didn’t feel like a win but sometimes you just have to win the game to play the next one.”

Keltos would like to see his offence be more diversified.

“You’re not going to make 14 threes every time to win the game and that’s where we have to get better,” he said. “Eden did everything right and the only thing they did wrong was they didn’t hit any free throws in the first half.”

The Flyers always seem to give the Bulldogs fits.

“It’s something about them that we don’t know how to figure out who their players are and not let them get the ball back,” Keltos said.

Mick and Angelo’s/Johnny Rocco’s/Cracker Jacks Players of the Game: Churchill’s Kennedy Millin with five points and a great all-around game and Eden’s Avery Cushing with a solid performance at point guard.