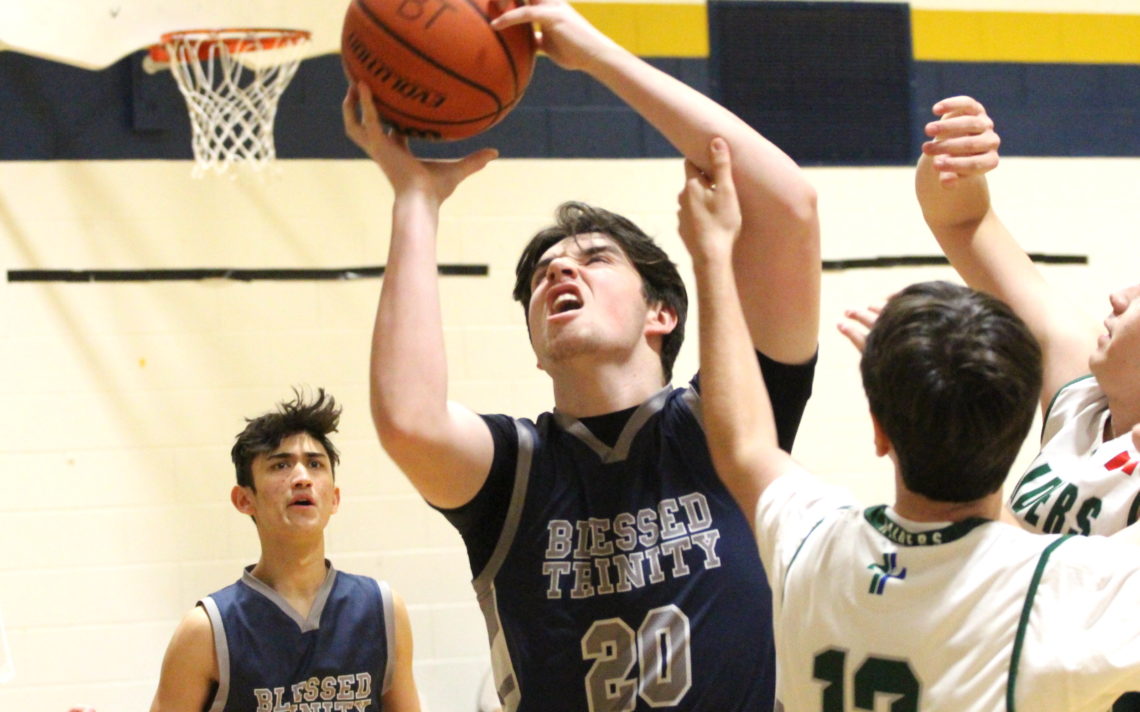 The Holy Cross Raiders had no answer for Michael Gore.

The 6-foot-6 centre was tough to contain in the paint, but also has other components to his game.

“They allow me to move around the court and facilitate and create other opportunities for other players on the court,” the Grimsby resident said. “I kind of mix and match and see how my game is going. If I’m missing the shots early on, then I’ll probably start facilitating, but if I get hot at the start, I’ll just let it go.”

“We obviously don’t have much size other than him,” Anderson said. “He’s a hard worker. I’m probably a little too hard on him sometimes because I expect a lot out of him but he can really help us.”

Gore, who plays club ball for E.L. Crossley coach Brian Bleich with the Pelham Panthers, got off to a quick start with eight points in the first quarter.

“If he has a good game, we usually win,” Anderson said.

The Thunder got off on the wrong foot Monday with an ugly loss at A.N. Myer but have rebounded with a pair of wins.

“We had a tough time,” Gore said. “Our energy wasn’t there so we took a day off, regrouped, came together as a team and this is the result.

“It was a tough loss. We felt like we could have taken A.N. Myer if we brought our energy.

The Thunder now square off Friday versus the Denis Morris Reds for the consolation title. The Reds topped the Thunder earlier in the season in a close game.

Anderson feels his charges will need to find another level against the Reds.

“We could have played much better today,” said Anderson, who was tossed out the matchup versus DM for arguing with officials. “We’re going to need to play much better against DM. They have a lot of size, a lot of quickness. I don’t think the effort we’ve been showing so far is ready for that kind of speed in the game.

“We watched them in the previous game and they look like they’re functioning on all cylinders. We have to get our act together in order to compete in that game.”

Holy Cross coach Randy Conlon was proud of his club for their effort and attitude.

“They are just polite, good kids and they never quit,” Conlon said. “These poor kids never won a game all through junior until this year. We had a few good wins and competed hard.”

The Raiders got off to a tough start with a lopsided loss to Eden Monday, but recovered to record a win Tuesday over Greater Fort Erie.

“They played better than us, but we did get a lot of open shots and we hit those yesterday and today we didn’t and that’s basketball,” Conlon said.