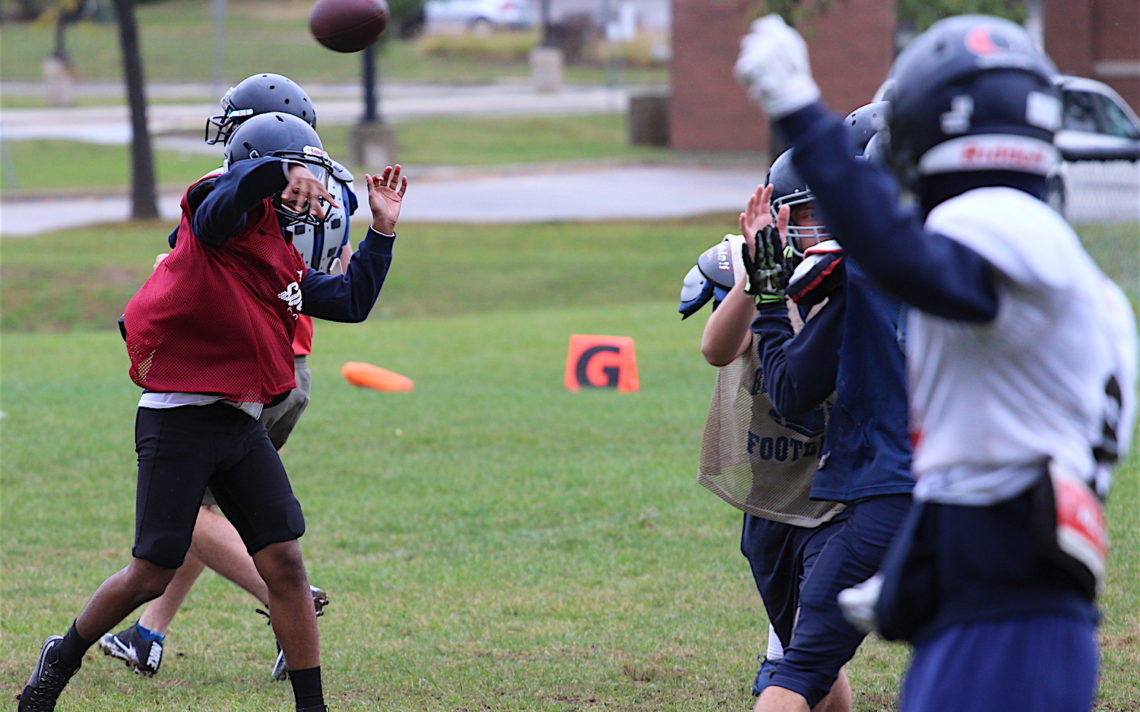 When the Blessed Trinity Thunder opened the Niagara Catholic Athletic Association senior football season with a 41-9 victory over the Denis Morris Reds, it sent a message to the rest of the league.

But just in case anyone wasn’t paying attention, BT head coach Mark Antonelli took it a step further. He boldly announced to all that would listen that the Thunder had much loftier goals than just a NCAA title. The Thunder are also on the hunt for a Southern Ontario Secondary Schools Association championship and an Ontario Federation of School Athletic Associations Bowl.

“A buddy of mine at another school thought it was funny but I didn’t hear much from anyone else,” he said. “I don’t mind putting that challenge out there because I wanted everyone to know that we aren’t messing around this year.”

His team would be the first to agree with that.

“These kids are hungry, I believe in all of them and we as a coaching staff believe in them,” Antonelli said. “We are building to get better and anyone would be lying if they said their goal wasn’t to win a championship at the end of the season.”

“I was 100 per cent in agreement and I speak for all of us,” the 6-foot-1, 195-pounder said. “Since the beginning of the season, even before DM, our goal was to get the three championships.”

Antonelli knows there is a cyclical nature to high school football and teams need to take advantage when they have a quality squad.

“I know our window to build and win a championship with this bunch is this year,” he said. “I am very aware of who is graduating and we are going to be much younger next year.”

De la Garza believes this year’s version of the Thunder has a chance to do something special.

“We have the talent and the desire to get there this year,” the Grade 12 student said. “Sometimes you have all the potential, but you don’t have the mindset to get there.”

Antonelli has seen progress in his team as the season moves along.

“We are starting to do some no-huddle stuff and we are trying to get everyone in sync,” he said. “The guys are rallying off each other and everyone is being more accountable.”

A big boost to the team’s growth came in a 35-10 victory over Holy Cross in the second week of the season.

“That was a big eye opener for us because that was a team that responded to our challenge,” Antonelli said. “They punched us in the mouth and we got down on ourselves.”

After a terrible first half, the Thunder rallied.

‘We told the kids not to fight with each other because this is their family,” he said. “As long as they are rallying with each other, there are endless possibilities for winning a championship.”

Unfortunately for the Thunder, their game last week against St. Francis was cancelled when the Phoenix forfeited.

“I was very disappointed with that situation and it was unfortunate because this isn’t a free sport and kids have to pay,” Antonelli said. “We’re asking them to fork over X amount of dollars and we’re telling them we are going to provide them with X amount of games.

“Moving forward, I am hoping we don’t run into that situation again.”

Antonelli said his kids were devastated with the forfeit.

“There are a lot of kids on this football team that don’t see much time and certain outcomes dictate who plays and who doesn’t,” he said. “Every time you don’t play, you are robbing those 10 or 12 extra kids from playing football.”

Among the key players on the Thunder’s roster are: tailback Isaac McAlonan, who has scored seven or eight TDs already, is a dynamic runner inside and outside the tackles, and is difficult to take down; Grade 11 slot receiver Luke Lemessurier, who has made an impact as a receiver and a kick returner; the team’s offensive and defensive lines; and De la Garza.

“He has taken the leadership role of the defence by the horns and has set the tone,” Antonelli said. “He is the one holding our defensive players accountable.

“The kids are kind of scared of him and I like that. And he backs it up on the field.

De La Garza said it’s him trying to be a leader.

“I hold everyone accountable and everyone on the defence has a job to do,” the 17-year-old said.

He has no problem getting in the faces of his teammates.

“Not in a mean-spirited way or talking down to someone but I’m just trying to tell them that they are my teammates and I need them to do their jobs.”

The Thunder return to work Friday in the crossover portion of the schedule which sees the top two teams in each division square off and the bottom two squads doing the same.