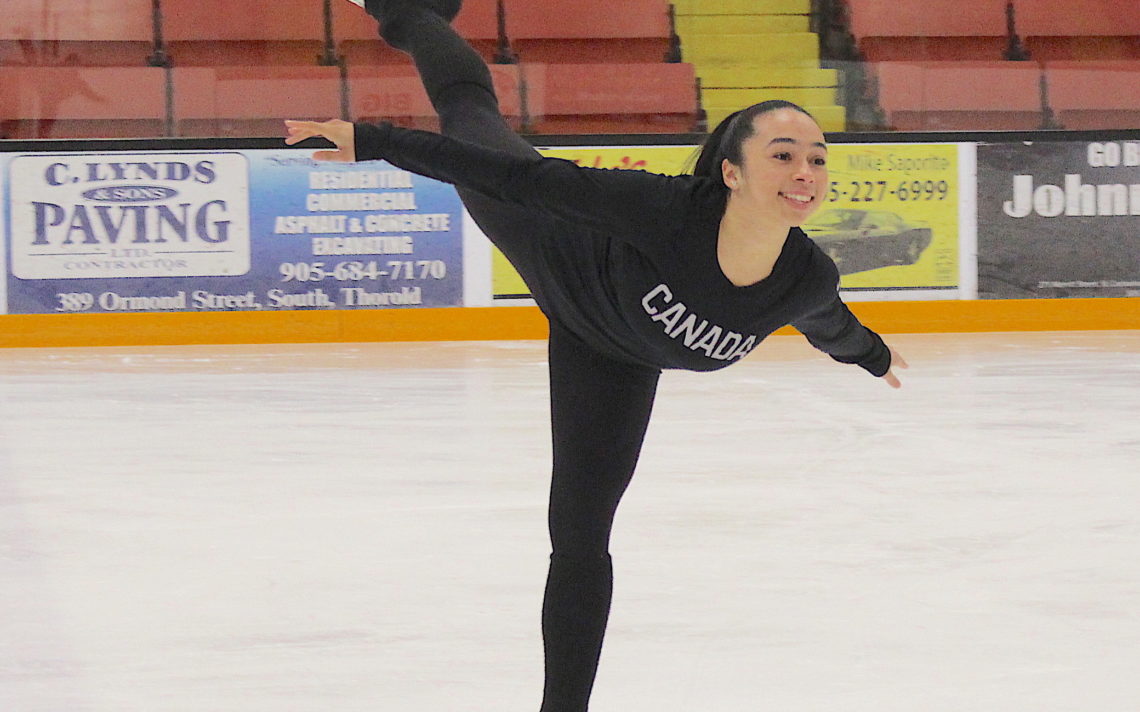 Thorold skater on Team Canada One

Avery Clark and the Nexxice junior synchronized skating team is off to Switzerland.

After placing second last year, the 19-member team — 16 skate during competitions — won the Canadian qualifier in January and will represent Canada at the world championships in March in Switzerland.

“It was amazing,” said Clark, a Grade 11 student at Holy Cross Secondary School. “We won the short program and we were ahead by two points and then going into the free skate we were confident we could win the whole thing.”

But that doesn’t mean Nexxice was overconfident.

“We knew we couldn’t make any mistakes and going into the free skate, it was nerve-wracking, but we knew we could do it because of all the training that we had done.”

The team ended up winning the long program by six points for an overall margin of victory of eight points.

“We were in the dressing room taking off our skates and our coach came in screaming ‘Canada One.’ It was the best moment ever,” Clark said.

Two teams from Canada are sent to the world championships and it usually comes down to Nexxice or Les Supremes from Quebec.

“There are three strong teams in the country and you are trying to be top two,” the 16-year-old said.

Clark believes a different approach to training put Nexxice over the top.

“We put a lot of ice time into our performance part,” she said. “We always had the technical part this year and last year, but we never focused on performing to our fullest.

“This year we added the performance with the technical and that made the complete difference.”

The team is hoping there will also be a noticeable difference at the world championships.

“There’s eight strong teams in the world — it could be anybody that takes it — and we are hoping for a top six finish,” Clark said. “Last year we were top eight.

“A podium would be amazing, but we are looking to improve from last year.”

There will be 20-25 teams at the world championships and Clark feels her second time at the worlds will be easier.

“The first time, I didn’t know what to expect. Going in now, I know the pressure of worlds, but also how much fun it is and how you have to live in the moment because it is a once-in-a-lifetime experience,” she said. “I know the work that needs to be done and it will be easier to handle the pressure.”

Clark practises three to four times a week, mostly in Burlington but occasionally elsewhere such as Waterloo or Mississauga.

“School-wise isn’t bad because my school is pretty good with helping me manage my classes and, if I am able to, get ahead in my work,” Clark said. “I am able to do that easily because of my teachers and the principal. They are really understanding of what we do.”

She feels all the hard work and sacrifices are worth it.

“It’s moments when we achieve our biggest accomplishments and what we have dreamed of,” she said, “It’s those moments you think of when you have to go to practice and you have so much homework.

“We’re going to practice every day to do what we love and in the long run it will result in something great.”

Avery isn’t the only one making sacrifices. Skaters have to pay for the international trips mostly out of their own pockets and Avery wouldn’t be able to do it without the support of her mother Jennifer Clark and extended family.

“They also help me out by driving because every practice is so far from where I am,” she said. “Getting there it isn’t easy for me so sometimes my grandparents or my aunt will help out.”

She’s grateful for everyone for allowing her to chase her skating dreams.

“It’s being with your teammates,” she sad. “I used to do competitive singles skating and I enjoyed, it but having teammates with you when you are at competitions allow you to help each other out and calm each other down.

“It’s the best feeling having 20 girls on a team doing what they love.”

Clark recently returned from the ISU Mozart Cup in Austria, where her team placed fourth.

“It wasn’t what we were hoping for,” she said. “We were going for top three, but unfortunately in the short program we had a couple of mistakes and we weren’t able to come back. But in the free (skate) we were able to finish third.”