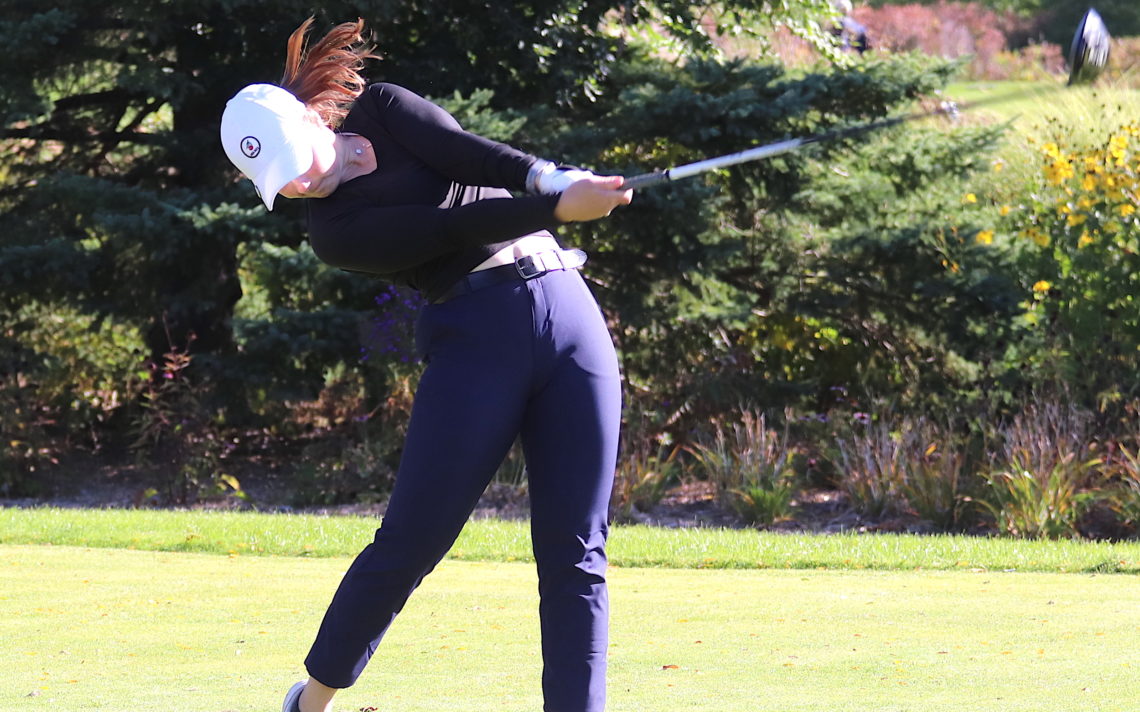 The 15-year-old student at Blessed Trinity fired a 71 to card the lowest individual score and advance to the Ontario Federation of School Athletic Associations (OFSAA) championship near London next week.

Eduardo Rodriguez of St. Mike’s fired a 72 and will also advance to OFSAA.

Thompson, who is a member at Sawmill, also teamed with Hudson Mielko (74), John Kingdon (77), Jordan Spratt (96) and Joshua Fabiano (103) to place first in the team competition with a score of 318.

Thompson said he didn’t feel any extra pressure with a trip to OFSAA on the line.

“I’ve played tons of tournaments. I’m used to this pressure by now. I knew that was there, but I had a team,” he said.

Speaking of the team, Thompson said the squad made sure to be as familiar with the course as they could.

“We’ve been out for a couple of practice rounds together and John and Hudson are also both members here as well so they know the course as well,” he said.

Thompson had a consistent round despite cold and windy conditions, particularly earlier in the day.

“The driver was pretty good and it’s definitely an advantage playing from the whites which are shorter tees than I usually play,” he said. “I was able to get on the greens on a couple of par 4s and capitalize and make some birdies and get shorter clubs in my hand, like wedges. Along with that, I really didn’t sink many putts today but it was pretty consistent, just two-putt pars.

“It could have been a lot better but it was pretty good.”

He also stayed away from any blow-up holes.

“It takes away a couple of birdies from your round and mentally it’s a little bit discouraging. Just being consistent is basically a big key,” he said.

He also enjoyed playing as a team.

“Even if I had a blow-up hole I know my team will always have my back and they can get a couple of birdies and pars and at the end hopefully it ends up being the lowest,” he said.

Cole is eager to participate at OFSAA with his Thunder teammates.

“I think the competition is going to be pretty good there. I have never played the course but I’m sure it will be a really fun experience and I’m really looking forward to it,” he said.

Michael Martel, a 16-year-old, Grade 11 student at Notre Dame, fired a 74 to tie with Mielko for first in the Open Division and also advance to OFSAA since Mielko had already qualified as a member of the Blessed Trinity team.

Martel said it was win or bust.

“It has to be win, obviously,” said Martel, who is a member at Lookout. “To get to OFSAA you have to be the top. I came third at SOSSA so coming in (I thought) I just have to win this. Just get the win and play the best you can and most consistent you can.”

He described his round as decent.

“It wasn’t too bad. One birdie. Driver was OK but overall not too bad,” he said. “The course was nice. It was a little tight. The greens were a little slow. It’s challenging at times, I’ll give it that.”

Martel was familiar with Sawmill from his time on the Niagara District junior tour.

“I know my way around. A couple of holes give me trouble but it’s a fun course,” he said.

Martel was the lone golfer from Notre Dame to participate.

“It was a lot of fun and the guys I played with were pretty decent.”

Mikayla Lacey, a 16-year-old, grade 11 student at Port Colborne High School, shot a 78 to finish second to Ella Zanatta of Westmount by three strokes in the Girls Open Division.

“Yesterday I played a practice round and I think that really set the tone for today,” Lacey said. “I started to putt really well and I was hitting my approach shots to the green really well and hitting a lot of greens.

Casey Kenney of Sir Winston Churchill finished third with an 85.

Lacey, who placed fourth and OFSAA last year, admits it was a bit daunting to go head to head with Kenney, who captured both the junior tour and Champion of Champion titles this summer.

“Maybe a little bit because I know this is her home course but I tried to stay mentally focused and think not about winning, but just the next one in front of me and it just kept working,”

All three will advance to OFSAA as will high school players Anna Kim of Westdale (84), Emma Leitch of Brebeuf (90) and Hazel Templeman of Orchard Park (103).